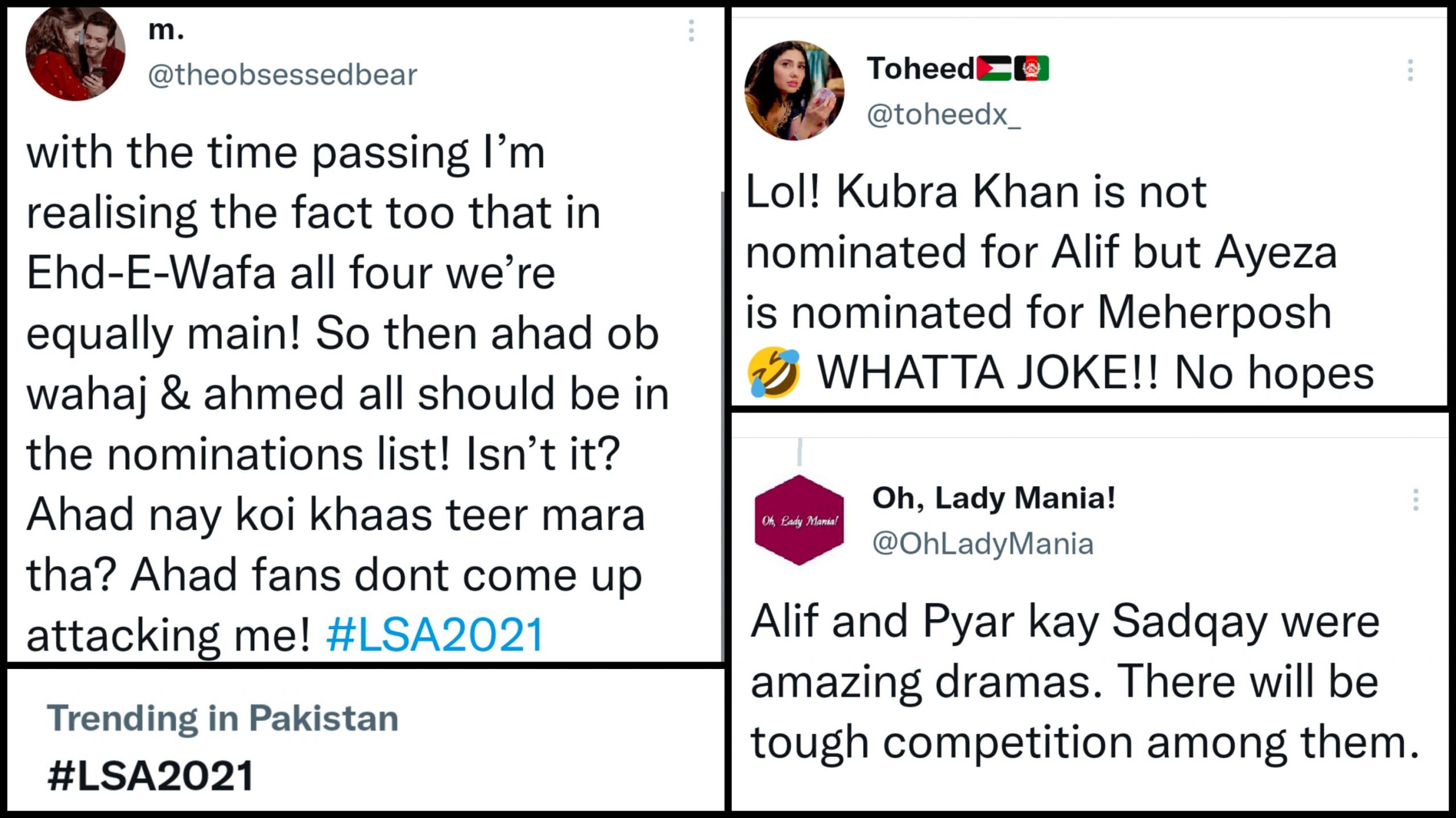 One of the most awaited award shows, Lux Style Awards, is right around the corner. And as the final list of nominees was released to public, people just can’t contain their excitement!

Here’s what they think about the nominations:

As much as I wanted sajal to get her due credits for the amazing performance in YDM as Aina I'm glad she got nominated only for Alif so all the votes will make more impact.
Sajla as Momina sultan was brilliant & if u think otherwise argue with the wall.#SajalAly #LSA2021 pic.twitter.com/Q2DGKsQfXP

momina sultan, one of the best female leads ever. here’s hoping that sajal gets her due for her brilliant performance🤞🏻🤍#LSA2021#SajalAly pic.twitter.com/4MehHV5POb

This girl here deserves to win every award! Such an amazing actress! Really puts her heart and soul in the character, be it Mahjabeen or #LSA2021 pic.twitter.com/jhHj4TkRdc

Ahad for Yeh Dil Mera & Sajal for Alif without a doubt deserve it! here’s hoping 🤞🏼 #LSA2021

Alif and Pyar kay Sadqay were amazing dramas. There will be tough competition among them. #LSA2021 pic.twitter.com/Ss2JHSDMoJ

People were predicting the winners already:

Yumna should definitely get one for PKS. So should Bilal.

People were ready to fight!

i will come for your throat if you give award to anybody other than sajal and yumna. #LSA2021

Ayeza Khan fans were excited too!

Really looking forward to LSA 2021! I know the competition is tough but I really want @Ayezakhanak3 to win something. @LuxStylePk #20yearsofLSA pic.twitter.com/HU8hLTHJrJ

Alif was definitely a favourite!

Alif was such an amazing show! Poore saal ka sabse behtreen drama tha. It has to win this LSA @LuxStylePk #20yearsofLSA pic.twitter.com/9apnFfesxI

Pehlaaj fans were over the moon!

Congrats to you too @iqrarulhassan as your son has nominated in Lux Style Awards.#20YearsOfLSA pic.twitter.com/zdCztNg68k

And while others seemed pretty happy with the nominations, many were disappointed!

No matter how huge they were in terms of TRPs, award shows shouldn't be nominating shows like Raaz E Ulfat, Fitrat, Meherposh, Deewangi, Kahin Deep Jalay. Where are the STANDARDS? 😬 #LSA2021 pic.twitter.com/RQFriBaSVr

Nominating one actor for two roles doesn't make sense tbh and it eventually results in dividing the vote bank of the actor. They could have nominated Ahmed for EhdeWafa and Ahad for YDM. Instead of Ahmed and Manzar Sb they nominated Imran for KDJ and Danish😒 #LSA2021

People had their reservations:

I have some mixed feelings about LSA nominations this year. Some deserving one are not nominated like Ahmed Ali Akbar for Ehde Wafa, Mohib Mirza for Dushman e Jaan #LSA2021

People wanted all 4 leads from Ehd-e-Wafa to be in the list:

with the time passing I’m realising the fact too that in Ehd-E-Wafa all four we’re equally main! So then ahad ob wahaj & ahmed all should be in the nominations list! Isn’t it? Ahad nay koi khaas teer mara tha? Ahad fans dont come up attacking me! #LSA2021

People were also disappointed on Kubra Khan being missed out:

Lol! Kubra Khan is not nominated for Alif but Ayeza is nominated for Meherposh🤣 WHATTA JOKE!! No hopes for Raqeeb Se next year😭 #LSA2021

Where THE HELL IS Kubra Khan for Alif? #LSA2021 pic.twitter.com/Zare2zp29E

why is Husn-E-Jahan not in the list? Kubra deserved to be nominated #LSA2021

Imran Ashraf wasn’t as much of a favourite in Kahin Deep Jalay:

Imran ashraf's Kahin deep jalay performance is a textbook case of how NOT to do acting and it's nominated. #LSA2021 pic.twitter.com/32S8pD38FF

Who will you be voting for? Let us know in the comments below!

Pakistanis Are Sharing The Funniest Things Their Grandparents Have Said & We Can't Stop Laughing!

Boomers Vs Millenials Vs Gen Z: Who's Got Better Music? The Debate Is On!

Director Teefa In Trouble, Ahsan Rahim & OST of Koi Chand Rakh, Shani Arshad disappointed about their songs not being nominated at the LSA