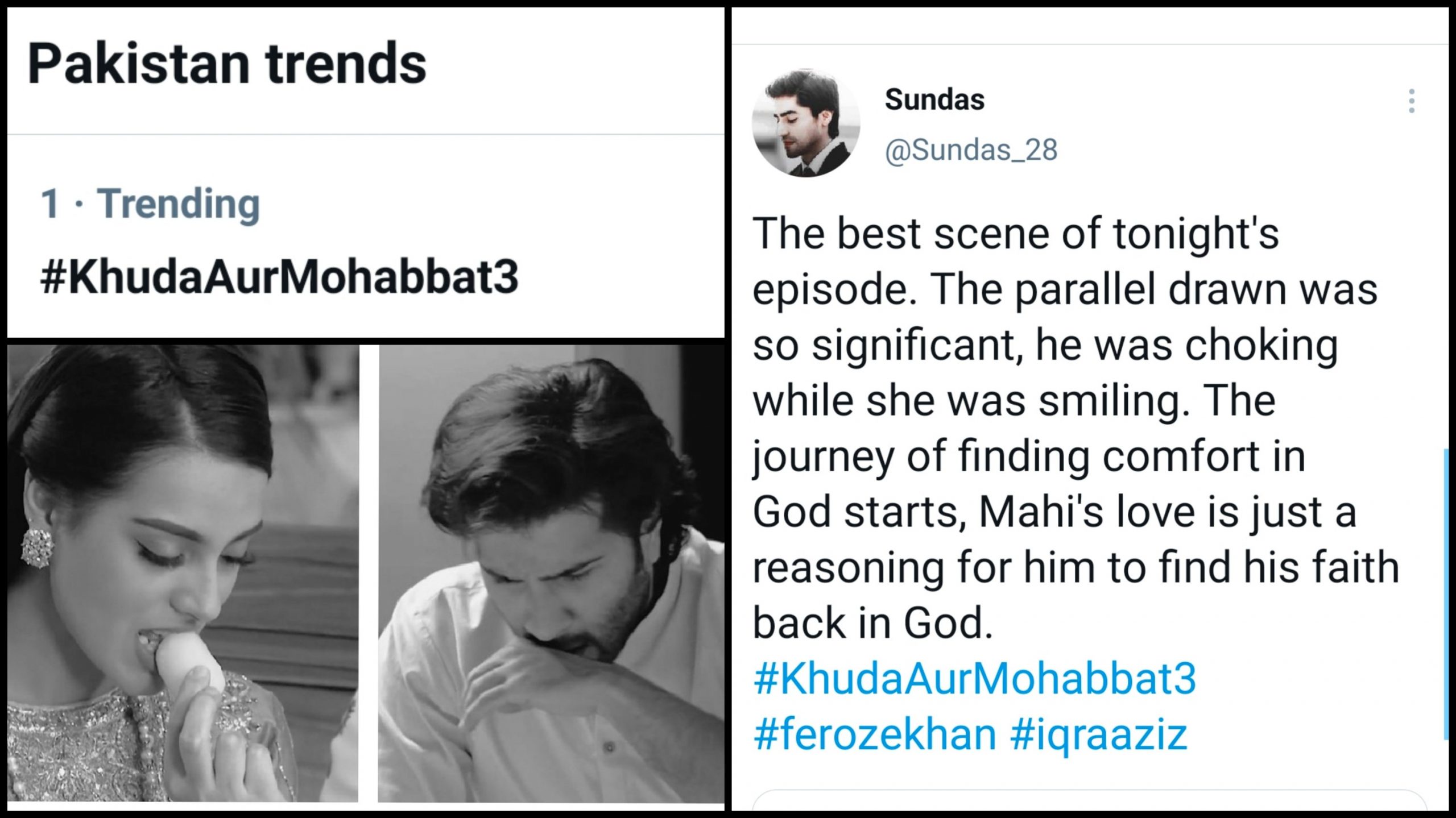 One of the most anticipated dramas of the year is back this week, breaking yet another record of 5.5M views in just 10 hours of being aired and the views aren’t slowing down anytime soon!

With the much awaited meeting between Mahi and Farhaad where he confesses his love for Mahi and Mahi dismisses all his feelings, the drama will now only get more and more intense with each passing episode! The drama has since then become the top trend on twitter as fans come to share their love for the drama:

And they’ve got lots to say!

The moment when mahi ate that sweet and feedi got hiccups,
The way he was collecting all the broken pieces of his heart 🥺💔
Uf! That pain though#FerozeKhan #KhudaAurMohabbat3 pic.twitter.com/AbM8A3Lg8P

The scene that broke us 😭

Couldn’t have said it better!

The best scene of tonight's episode. The parallel drawn was so significant, he was choking while she was smiling. The journey of finding comfort in God starts, Mahi's love is just a reasoning for him to find his faith back in God. #KhudaAurMohabbat3 #ferozekhan #iqraaziz https://t.co/RhUyH27mON

No one could have played Farhaad better than Feroze Khan:

feroze khan is so good at portraying farhaad’s feelings you can put yourself in his position even if you’ve never experienced a heartbreak before, now that’s what u call a good actor🤍✨ @ferozekhaan #KhudaAurMohabbat3 #FerozeKhan pic.twitter.com/gTBMof8tov

-SO RAW AND INTENSE.. The way you carry your character is just phenomenal.. You truly deserve all the love and appreciation.. It's not an easy play to carry but how well you bring heart and soul to Feedi.. Much love.. I'm teary and grateful.#KhudaAurMohabbat3 #FerozeKhan pic.twitter.com/Y70fht8SXe

My heart broke into pieces especially in the last scene the way Feedi is in pain just hurts me! 😭🥺 #FerozeKhan does it so naturally I swear 😭 #KhudaAurMohabbat3

I know ya all think Feedi is stupid he got in this auto-destructive mode that if he doesn’t have Mahi he’d rather die. That’s kinda dumb but it’s how Khuda Aur Muhabbat has always been. He will be heartbroken, humiliated and he will find comfort in God. #KhudaAurMohabbat3

Haye, another heartbreak that Naheed will go through 💔

Fans were in love with the dialogues:

these words coming from someone you already love is enough to make you die there itself😭#KhudaAurMohabbat3 #KAM3 pic.twitter.com/lbJjsEQVD5

People were feeling every emotion that Farhad was feeling:

-I wish I could slap Mahi and hug Feedi.. The way she disrespected and made fun of his pure feelings and devotion towards her.. How can someone be that rude? He is always sweet and respectful towards her.. When she broke his heart and he still cares for her..#KhudaAurMohabbat3 pic.twitter.com/mvhYphY3MY

Mahi the guy you’re taunting today is the guy you will fall for tomorrow and a lot of pain awaits you ahead! I’m not ready for next week Feedi will get shot 🥺😭 #KhudaAurMohabbat3

People had questions for Feroze!

MAHI WILL SUFFER EVEN MORE THAN THIS
NOT ONLY HER
EVERYBODY AROUND HER WILL BE AFFECTED AND PAINED.
🙂🥺🥺
AB ASAL MEI SAB KUCH SHURU HUA HAI🌝 pic.twitter.com/Gn4bghaw4H

I think we all did!

SUCH AN INTENSE YET BEAUTIFUL SCENE THIS WAS!!! 😭💗#KAM3 #KhudaAurMohabbat3 pic.twitter.com/g54KhwFz3o

Don't be crazy for it. Its just a drama

How did you like last night’s episode? Let us know in the comments below!

Telefilm Teri Meri Kahani Wows The Audience & They Can't Stop Talking About It!

5 Dramas We Love At The Moment!