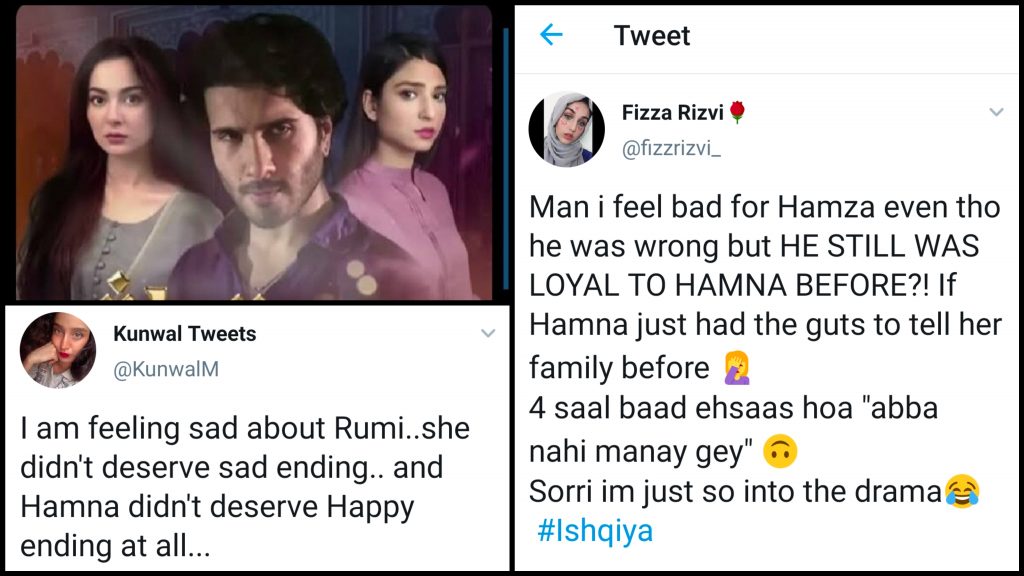 Investing 29 very long weeks in Ishqiya, fans were thinking they’ll get the happy ending that Rumi and Hamza deserved, but as the last episode aired, fans were left heart broken!

Making the drama a top trend on Twitter, people have lots to say, especially the #Rumza stans!

Man i feel bad for Hamza even tho he was wrong but HE STILL WAS LOYAL TO HAMNA BEFORE?! If Hamna just had the guts to tell her family before 🤦‍♀️
4 saal baad ehsaas hoa "abba nahi manay gey" 🙃
Sorri im just so into the drama😂
#Ishqiya pic.twitter.com/OYqbxUap2M

The ending was beyond fans:

How come the girl who did not even stop her sister from marrying the guy whose only intention was revenge upon her and clearly using her sister got happy ending and
The girl who was kind hearted and selfless got a sad ending? WTF was the ending #Ishqiya

Is no one going to talk about Hamna’s mistakes? She literally betrayed not only Hamza but Rumi as well. If she was forgiven, why not Hamza?? #Ishqiya pic.twitter.com/2ib36dG5OB

Worst ending. The only sane and nice character got played. Makes no sense #Ishqiya #Rumi pic.twitter.com/fDv6e8ZfUG

Some fans were furious!

Me to Hamna : 😭😭😭😭#Ishqiya pic.twitter.com/wtbWNPPal3

Many argued how Hamza and Rumi deserved a happy ending:

Never did any harm to each other, still lost their child,their marriage, their happiness and everything else! Like wtf did the writer do! They totally deserved a happy ending😤#Ishqiya pic.twitter.com/NrKCw0uJtM

People were all praise for Azeem:

"May be what you want is a drop, but Allah is planning an ocean for you" perfectly suits here…Hamna wanted Hamza and Allah blessed her with such an ideal partner like Azeem🌼#Ishqiya pic.twitter.com/PnozrkUZHr

Many found the drama serving no justice to Rumi:

To me #Ishqiya has both good and bad ending…bad in the sense that it was not a happy ending😕..nd good in the way that it has shown the worst result of egotism…but above all justice has not been done wid Rumi’s character….just a view pic.twitter.com/V58EynFBdy

hamza’s character growth was one of the best, yes he was a jerk initially but he was betrayed too and then boy changed himself entirely for rumi and genuinely started loving him. i am so disappointed rn. #ishqiya pic.twitter.com/jjIVFpxA77

Many found a lesson in the drama:

#Ishqiya 💔
The lesson is that parents need to be flexible and understanding. So their kids don't hide things from them. pic.twitter.com/y24oO8fj7E

Many were missing the Khalil ur Rehman Qamar touch:

Story would’ve been different, if this guy was around 🤣#Ishqiya pic.twitter.com/dRgPoYMqC6

Sad ending but moral is good.
Those who don't respect girls deserve the same. In this drama we should learn a lot and respect women.#Ishqiya #Hamza pic.twitter.com/iKIpxODVSR

If word "Sakht londi" had a face it would be Rumi 🔥#Ishqiya pic.twitter.com/Z7LK7r0o2I

When Hamna deserve a second chance then Hamza too because it's not just Hamza who did wrong even Hamna was equally involved😠😏#Ishqiya pic.twitter.com/i5ufyJSPIr

All of this shit happened just because hamna could not stand up for her love, and she is the one who got a happy ending. Are you fucking kidding me?? Rumi forgave hamna but she could not forgive Hamza?? what bakwas, so so disappointed!! #Ishqiya

Others were calling it a waste of chemistry:

so rumza didn't get a happy ending whereas hamna's mistakes weren't even addressed🙂all that character development on hamza's part went down the drain🙂my only regret is that feroze and hania had to come together for a drama like this.what a waste of their chemistry #Ishqiya

#TeamHamza was left the most hurt:

Hamza was wrong I agree but he never played with rumis feelings he was real with her and he didn’t deserve this.
I HATE THIS.#Ishqiya

Imagine wasting 28 weeks watching and loving a great show and then see the writers destroy it in front of your eyes and you can't even do anything except tweet…#Ishqiya pic.twitter.com/4l9a66SFIo

And we have a winner!

This is what it is!!! 🙌🙌🙌
We invested so much of our love and time to Rumza that we really did not want to see anything else other than their happiness. 💔
This comment sums up Ishqiya in a very good way. Let's not cry anymore and let's just be happy that it happened.#Ishqiya pic.twitter.com/nmNKVMdeie

What did you think of the ending? Let us know in the comments below!

Truer Words Have Never Been Spoken About ‘Pasand Ki Shadi’, & Dukhray Go On!

This Tiktok Video On Love Has Twitterati Confused As Hell!