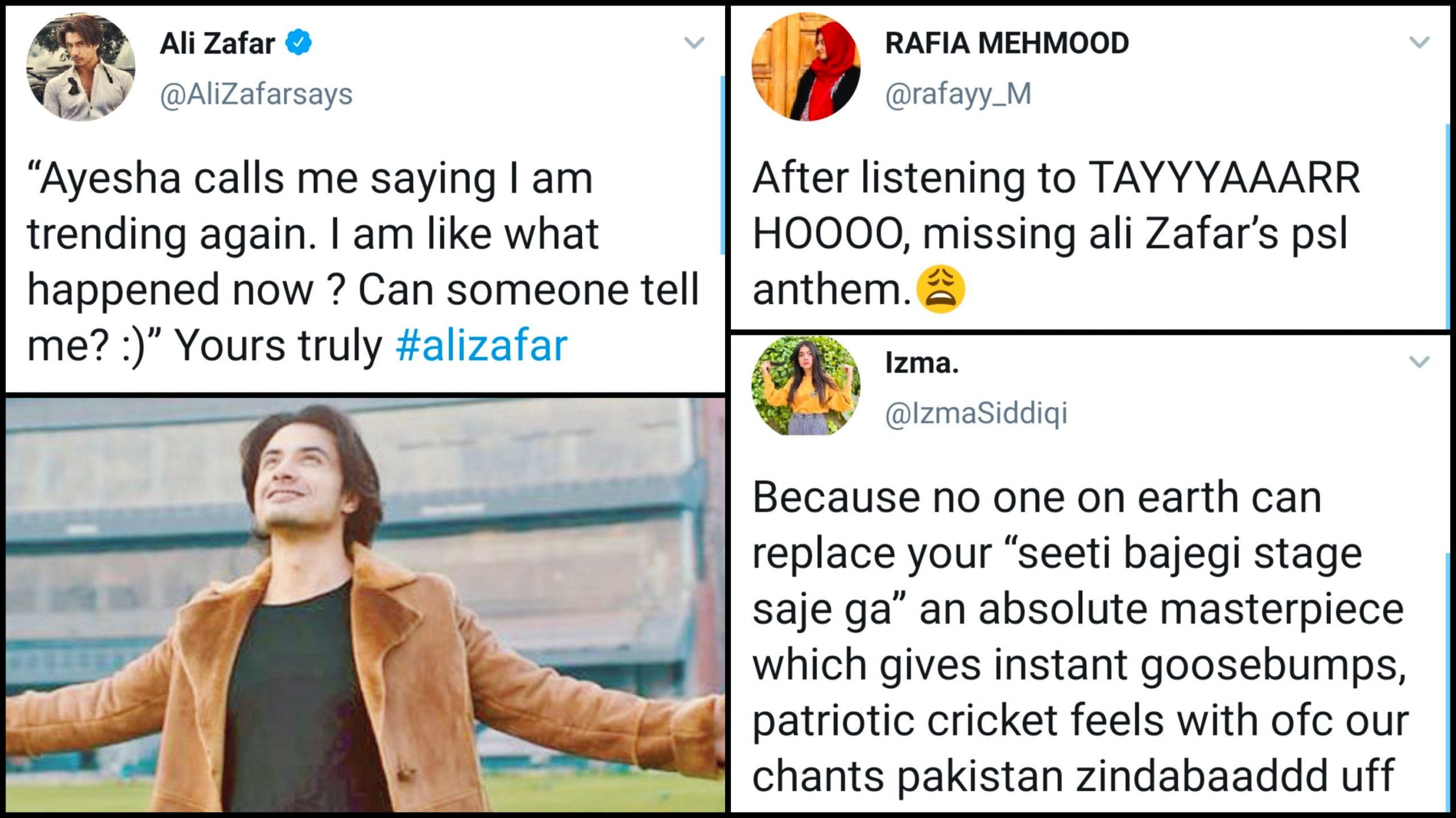 PSL is right around the corner and to get the people in spirit, PSL released their official anthem for the fifth season featuring Ali Azmat, Arif Lohar, Asim Azhar and Haroon:

The song however, did not live up to the expectations and people were immediately reminded of the previous anthems that Ali Zafar had done for PSL, making him one of the top trends in the country:

Which left him wondering why:

“Ayesha calls me saying I am trending again. I am like what happened now ? Can someone tell me? :)” Yours truly #alizafar

And the answer was obvious!

Because no one on earth can replace your “seeti bajegi stage saje ga” an absolute masterpiece which gives instant goosebumps, patriotic cricket feels with ofc our chants pakistan zindabaaddd uff https://t.co/BagBELzdQb

The bar was set way too high for many by Ali Zafar:

The bar is too high for others… pic.twitter.com/z3k3T2J1r5

People were sharing how much they missed Ali Zafar’s voice in PSL:

Believe me most of us are missing his voice from PSL anthem.! His voice was 'JAAN' of PSL ❤️.@AliZafarsays#PSLV #TayyarHain#alizafar pic.twitter.com/9VF976NQyg

The feel and vibes from Ali Zafar's anthems were unreal. At least, they synced with the video, lyrics, environment created & used to boost up the emotions. Ali Zafar's songs are irreplaceable & this is why only his songs are still played in our stadiums.#TayyarHain #PSL2020

They deemed him irreplaceable:

Once a legend said that

Most definitely the best PSL anthem:

Some were tweeting out their reactions in the most apt way:

This is the reaction of Ali Zafar and every fucking sane pakistani after listening to "Tayyar Hain".#TayyarHain #PSL2020 pic.twitter.com/t3bkHVvKaE

Some thought no one can reach Ali Zafar’s standard:

This man has set standards which nobody can meet.
Ali Zafar still has the best PSL Anthem.#PSLV #PSL2020 #TayyarHain pic.twitter.com/kCGnsXYVj6

People were sharing how the old anthems still gave them goosebumps:

I literally have goosebumps whenever I listen to this…

For some he was PSL ki jaan:

Believe me most of us are missing his voice from PSL anthem.! His voice was 'JAAN' of PSL ❤️.#PSL2020 pic.twitter.com/KZeZLVsy4E

His fans were requesting him to make an anthem on his own:

And there were more reactions:

What do you think about the new PSL anthem? Let us know in the comments below!

9 things you should know about the Aquarius in your life