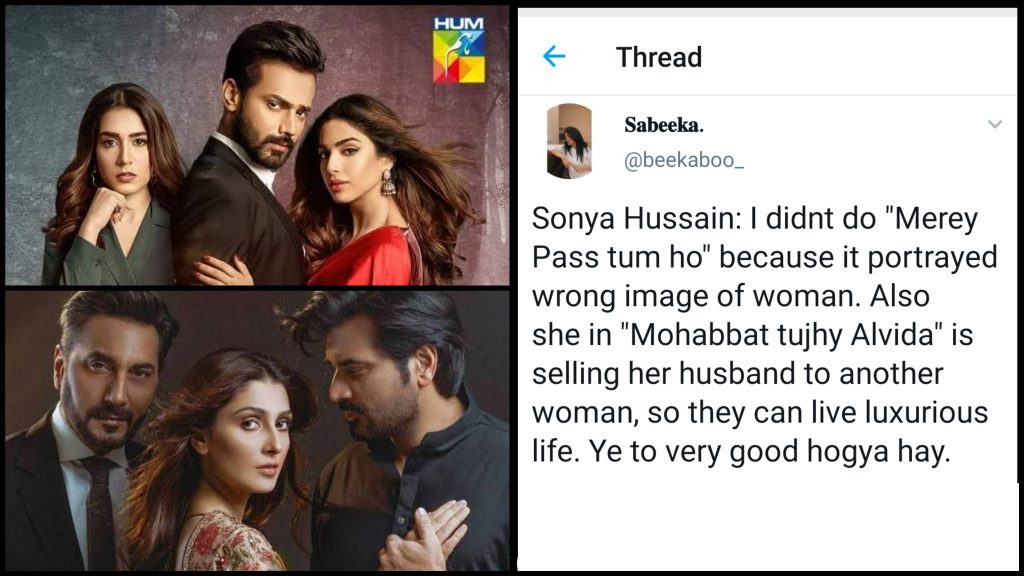 Back when Meray Paas Tum Ho was the talk of the town, Sonya Hussyn revealed that she was offered the role of Mehwish before Ayeza Khan but rejected it because it portrayed women in a bad light.

And while people loved her stance on rejecting the role of Mehwish, they feel that her on-air drama Mohabbat Tujhay Alvida narrates the story of a similar woman:

Sonya Hussain: I didnt do "Merey Pass tum ho" because it portrayed wrong image of woman. Also she in "Mohabbat tujhy Alvida" is selling her husband to another woman, so they can live luxurious life. Ye to very good hogya hay. pic.twitter.com/i52uVFMxJt

People were calling her a hypocrite:

Hypocrisy is the name of everyone in film industry

People found the storyline to be problematic:

this drama is detesting. i cannot absorbe a second of it. i am so sad for such great actors working in it knoeing the shitty problematic story

People were calling her previous statement an act:

But she is very good actress

That’s one way to put it!

In MTA she is portraying brave side of women. Like brave enough to sell her husband. Isn't it? 🤣

Some found her to be an opportunist:

Others weren’t too happy with the drama:

She is acting so over in the drama..it's very annoying 🙄

And then they raise hue and cry about promoting the local content & have the audacity to call other artists an "international garbage"- way to go 👏👏👏🤦🏻‍♀️ https://t.co/zbaRXU4oaP

People were also appalled that she is doing a film opposite Mohsin Abbas Haider:

Also, she is doing a film with Mohsin Abbas, the same man who beat his wife and then accused her of cheating while he was cheating on her. https://t.co/uOnDOC7yOh

People had some very bold opinions:

I'm so so happy she didn't do MPTH she could have ruined the character.

Some were looking at the bright side:

At Least Better Than Mere Pass Tum Ho , Haraam Relationship With An Another Man… https://t.co/oka572AgAF

Fans really think that there must be a reason for it:

There is difference between begharati & making ur husband marry another one , mehwish sold herself/ love for money she were living with a man without nikkah , ulfat sell her husband put him into a halal rishta she still love her husband tou maybe there must be a reason behind all https://t.co/tFFho8UNaJ

Some had theories of their own:

She probably was scared of that “Thappar” scene so she refused to work in this drama. https://t.co/5yvHErI0SC

What are your thoughts on Sonya Hussyn’s previous comments following her role as Ulfat? Let us know in the comments below!

10 Organic Bar Beauty Products You Need In Your Life!

Curtain Raiser: Here's All That You Need To Know About Hum Social Media Awards Powered by Facebook!