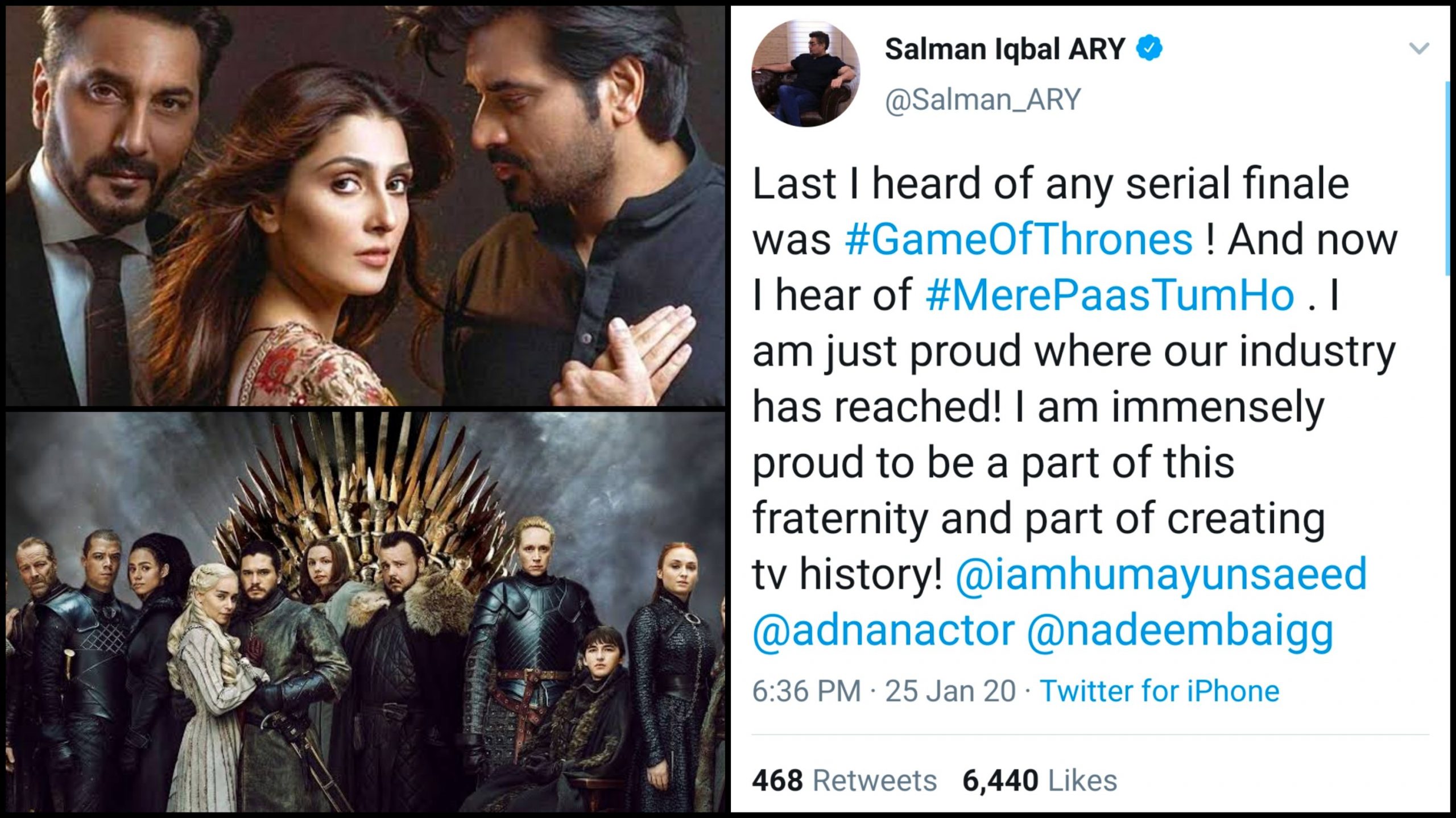 One of the most watched dramas in the history, Meray Paas Tum Ho, came to an unsettling end on Saturday.

With videos of people crying over Danish’s death and news channels reporting the death, Salman Iqbal compared the hype of the drama to the the very famous show Game of Thrones congratulating how far the industry had come:

Last I heard of any serial finale was #GameOfThrones ! And now I hear of #MerePaasTumHo . I am just proud where our industry has reached! I am immensely proud to be a part of this fraternity and part of creating tv history! @iamhumayunsaeed @adnanactor @nadeembaigg

And the netizens were just not having it with the comparison:

Some thought he was being over-confident:

People came at him with facts:

The full viewing for game of thrones, that included pirated downloads , exceeded 80 million people worldwide & ain't no way that many people watched this. https://t.co/wmJcV8Uc9r

And of course, there were epic memes:

Some suggested that he starts preparing his Oscar acceptance speech:

You should probably start preparing your Oscar acceptance speech now

Some still weren’t over Danish’s death:

App to proud ho par danish ko mar k jo hamain rolaya hai us ka kya 🤷‍♀️why wafa b ur mot b ur mehwish mazy b paisy b ur mafi b.

People were tweeting out their hilarious reactions:

Some are actually planning to sue him, #YouHeardItHereFirst:

It was a good effort but comparing this crap #MerePassTumHo with #GameOfThrones is an insult of Game of throne. I plan to sue you being this much dumb. https://t.co/qSfVHrg9xn

You do realize #GameOfThrones ki finale was… shit? https://t.co/avfuZhrmCV

Some were disappointed how there wasn’t a Humayun Snow coming back to life:

You just heard about GOT but never about Jon Snow, we were expecting Humayen Snow scene yar 🤨 https://t.co/04K7CXsUmY

It’s not that simple:

killed one lead character in drama, thinks it's similar to GOT, matlb khuch bhi https://t.co/vvyYml6pwa

Some threw shade at him with the infamous 2 takay ki aurat dialogue:

Many were appalled at the audacity:

He mentioned Game of Thrones and Mere Pass Tum Ho in one tweet. The audacity. Wow https://t.co/OavNw2aXly

And after all the bullshit saga of MPTH and its shitty subject, he has the audacity to come up with this comparison….. https://t.co/6weosazfcv

Some did however, agree, in a whole different sense though:

Some still had their reservations against the content in the show:

Game of Throne was an epic series based on the struggle between dynasties to take control of the throne while #MerePassTumHo is shameful show presenting woman as a gold-digger. You should be ashamed for discracing women and comparing this disgraceful show with a great #GOT https://t.co/zfCIvqe3RO

One may be have lil bit issues with dialogues but Yes #MPTH far better than tat shit GOT which was not even realistic based on fantasy!!!!! Well done Pakistan, Pakistan Zindabad 🇵🇰 https://t.co/c6e3v7mXr7

Those making a big deal out of #MerePassTumHo don't know how quickly we get over things. I mean we barely talk about GoT anymore; the nailbiting series that kept us on the edge of our seats for 8 years.

What do you think about Salman Iqbal’s tweet? Let us know in the comments below!

Hum Style Awards 2020 Red Carpet – The Fabs and The Drabs