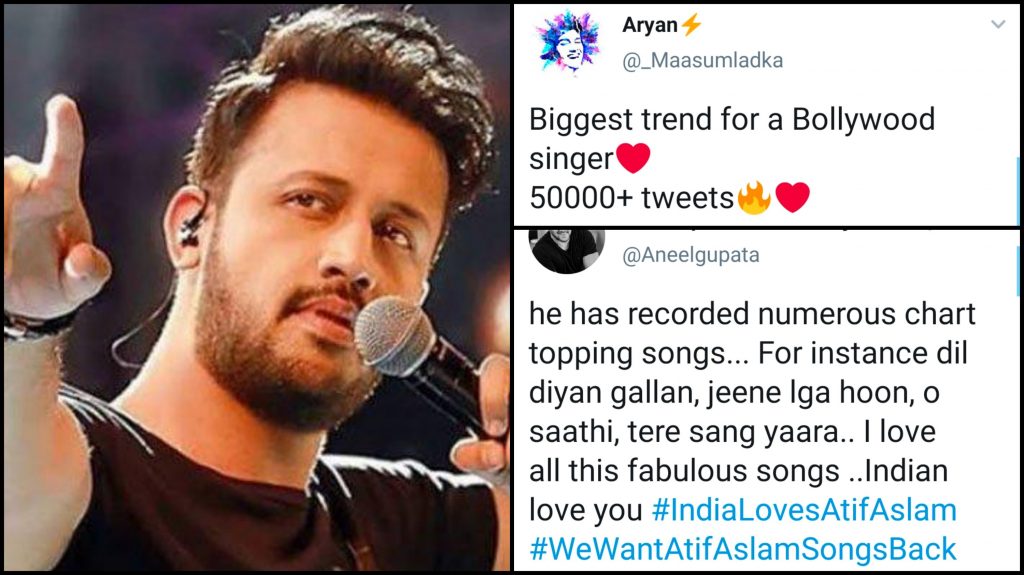 2 days after releasing Atif Aslam’s version for Kinna Sona from the movie ‘Marjavaan,’ T-Series faced tons of flak from Indians as they trended the hashtag #AtifAslamNotWelcome and demanded that the song be removed asap!

The trend also caught the attention of Maharashtra Navnirman Sena (MNS) and their President of Cine Wing issued them a stern warning to take the song down:

WARNING TO TSERIES
Take down Pakistani singer Atif-Aslam song from your TSeries youtube channel immediately else we will take a major action against @TSeries. #TakeDownAtifAslamSong @itsbhushankumar @mnsadhikrut @rajupatilmanase

The music label has since then taken the song down and has issued an apology for not complying with the All Indian Cine Workers Association (AICWA) which has banned artists from Pakistan from working across the border.

And while hastags like against Atif Aslam have been trending in India, his fans have started #IndiaLovesAtifAslam and #WeWantAtifAslamSongsBack to support him!

His fans were full of love!

People were sharing what others had to say about his kindness:

The trend had more than 50k tweets in support:

Biggest trend for a Bollywood singer❤
50000+ tweets🔥❤
.
Congratulations to each n every @itsaadee fan.
We did it. We won Mr. STARK❤#IndiaLovesAtifAslam #atifaslam pic.twitter.com/pD38ZACQqR

Many were throwing shade at other fans:

Le other Bollywood singer to their fandom: pic.twitter.com/HjFbimm4bu

Singer Tony Kakkar too tweeted in support of Atif Aslam but deleted the tweet after facing severe backlash:

Fans were adamant that Atif Aslam cannot be replaced!

TV Talk: 10 Television Directors Who Keep Us Entertained The Most!

5 iconic Pakistani songs of all time