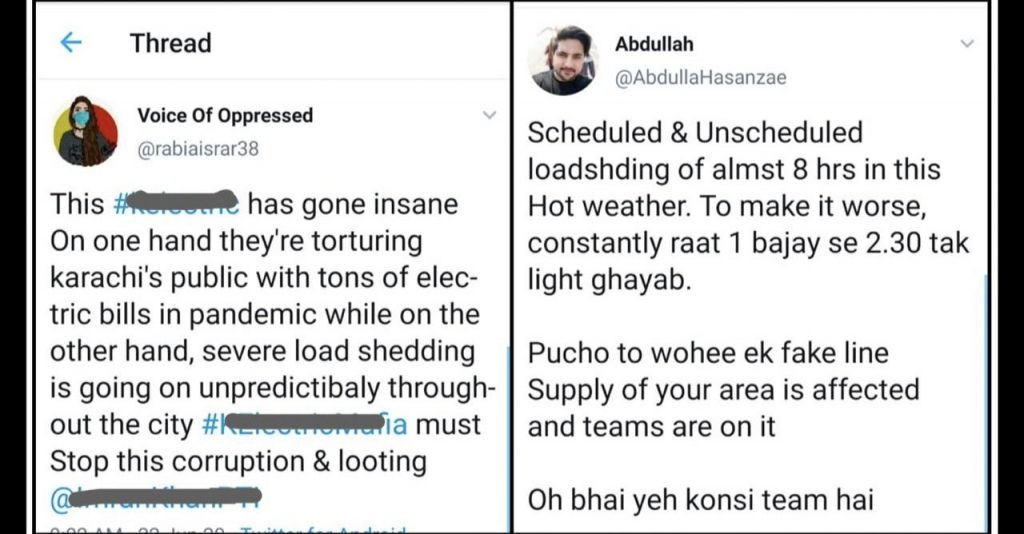 As Karachi witnesses one of the hottest summers, power outages have been more frequent and longer for the citizens, with some areas experiencing load shedding for 5-6 hours almost daily in the name of ‘technical faults.’

With the weather so humid and hot, the unannounced outages have the citizens furious, various protests were held today against this injustice, and the internet has lots to add to the issue!

We are facing 7.5 Hours or more Loadshedding per day in our area۔
Whenever we asked about relief they say that we are not getting full recovery۔
If we try to argue they make as defaulter۔#KElectric is a Mafia#KElectricMafia pic.twitter.com/PsgdpOiDxx

People were asking if Karachi was even owned by someone:

What the is wrong with #KElectric? Load shedding in the name technical faults that too in this Hot weather is not on! Any owner of #Karachi?

People were also furious at the overbilling:

You're Gonna Burn in Hell….
2 hours Off, 10 minutes On, 4 hours Off, 2 minutes Off
You don't even pay for our Appliances and charge us Heavy after wrong readings…
Do you even have a Family or just exist to irritate us @KElectricPk #KElectric #imrankhanPTI #Loadshedding

People were also complaining at the odd hour loadsheddings:

What the hell is wrong with you? @KElectricPk How could you do load shading in the 5AM in the morning. Don't you have other schedules in the day? You are mentally torture people. Don't you care about kids and old people? 5AM in the morning? #KElectric #KE_ShamefulServices

Nowadays #KElectric has started a new stupidity. Exactly at 2 o'clock in the midnight, for one and a half hours, the whole of Karachi is plunged into darkness.#KElectricMafia pic.twitter.com/bNabTKDKTj

Can you please let me know the reason of this prolonged load shedding in this intense heat and humidity. Why this insensitivity?#KElectric

People were sick of the same replies:

Some have been wanting to file a case against them:

Does anyone know how to file a human rights violations case against @KElectricPk in international Court of Law for Karachites?
Pakistani judiciary and federal and provisional government seems to be on #KElectric payroll, so no hope from them.#KE_ShamefulServices @ImranKhanPTI

People from middle class were worried:

People were furious at their customer service:

Dear @KElectricPk
Even after paying all the hefty bills and heavy taxes, your services still remain worst.
PLEASE PLEASE Get lost if you can not solve the issue of loadshedding in 21st century!! #KE_ShamefulServices #Loadshedding #KElectric

Some were asking where the Sindh government was:

Our old age citizens of Karachi are dying due to this load shedding in this extremely hot weather,where is sindh gov ,where is humen organizations #KElectric

People were done with the games:

This #kelectric has gone insane On one hand they're torturing karachi's public with tons of electric bills in pandemic while on the other hand, severe load shedding is going on unpredictibaly throughout the city #KElectricMafia must Stop this corruption & looting@ImranKhanPTI

What do you think about this shortfall? Let us know in the comments below!

15 Pakistani Fiction Novels You Need To Read If You Haven't Yet!