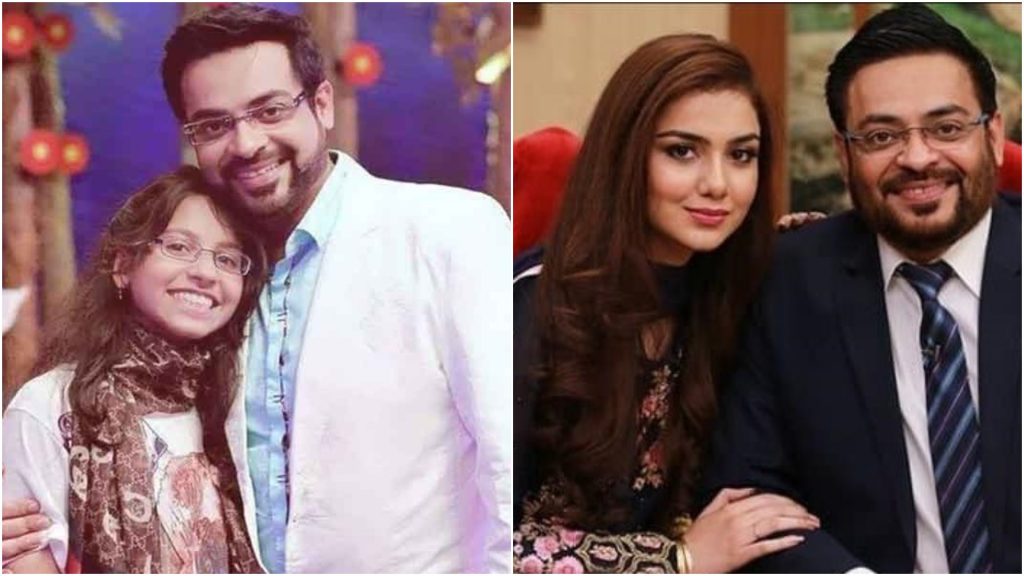 Aamir Liaquat is the undisputed king of controversies. Recently, he has been away to perform Umrah with his second wife Tuba Aamir and both have been keeping their fans updated through social media

I am in #Madinah and it feels like Home 🙏🏻 #Blessed #Alhamdullilah

And while their fans congratulated them, Aamir’s daughter sent a very angry sub-tweet to Tuba:

Go to Makkah or Madinah all you want, Allah will not forgive those who have broken families and wronged their own. Its sad to see hypocrisy to such a large extent. Her sins could never be forgiven.

In her tweet, Dua mentions how Tuba who had broken their family will never be forgiven for her sins. She also mentions people who have wronged their own, hinting towards her dad. Her tweet got a lot of support from her followers:

It seriously breaks my heart to see children suffer because of marital issues. Duas for u and your mother and family. But u shouldn't just blame her.. It was your father too.

A few tried explaining how her father was equally responsible for breaking their home:

Dua beta plz be patience.. Beta in my view, if u don't mind… She is not only responsible to broke your family,, she is not alone..your father is also responsible and a crime partner of her..Allah aap k dil ko sabar dey aamin

Majority of the people tried telling her to be patient and not discuss family matters on social media:

Some tried telling her that she is too young to be talking about these matters:

Beta its not her its your father AND her. Theyre together in this marriage. Youre just too small to speak like that. I do not come from a perfect family too. But

Some suggested that she forgives them

Trust Allah and don’t wish bad for him or her, Allah loves people who forgive. I know how hard it is, even I hate her every time I see their picture together. But you can’t change anything, just accept the truth and take care of your mom!!

But Tuba too made a shady tweet, in response to Dua’s tweet, saying that “you just don’t go to Makkah and Madina but are called there by Allah” and that “there’s a reason Allah is the judge and not humans”

The most miraculous thing about Makkah & Madinah is that you can never just ‘go’ there until you are Called by the Master. Allah is the ultimate judge of everything & no matter how much anyone curses or hate, He knows the truth. There is a reason He is the judge and not humans😌

Aamir Liaquat too joined in as he quoted Tuba’s tweet and told her he was proud of her:

Understanding is an art. And not everyone is an artist. Proud of you. https://t.co/YKhAhA2i74

And while Aamir Liaquat tried saving her, both Aamir and Tuba faced tons of backlash for picking a fight with a kid:

And second thing if you are realy that good human why do you even rply this way to @Duaa_e_aamir . She is just a kid you are married to her father. Can't you tolerate and show some not love then atleast maturity and sensibility.

People were furious at Aamir for picking sides:

Aamir bhai she just retweeted a tweet where ur daughter was called a stupid.. U shouldn't be proud of something like that.. Rest is up to u.. May Allah guide all of us to the righteous Path aameen

She is taking jabs at your daughter that too on a public forum and you are encouraging it? Shameful

Then how come all these corrupt politicians and thieves go for umrah after every six months? Money can buy everything including plane tickets! They're called to give hidayah and in your case to guide you to not be a home wrecker

Some of her fans were disgusted by her immature behavior

People were appalled at her behavior

R u trying to compete with the daughter of your husband? 🥊🥊🥊

Needless to say, she made the people really angry:

Wao!
I hope your duaghter may not go through the same mental crisis @AamirLiaquat first duaghter is going through yet.
If he can leave Mrs Bushra Amir then you are nothing but a piece of shit.

Many criticized her on her logic and said it’s the money that takes you places:

That’s why poors are excluded from the prestigious call!

What do you think about this situation, should the Aamir Liaquat family wash their dirty linen in public? Let us know in the comments below!

This guy from yesterday’s match is now an epic meme!