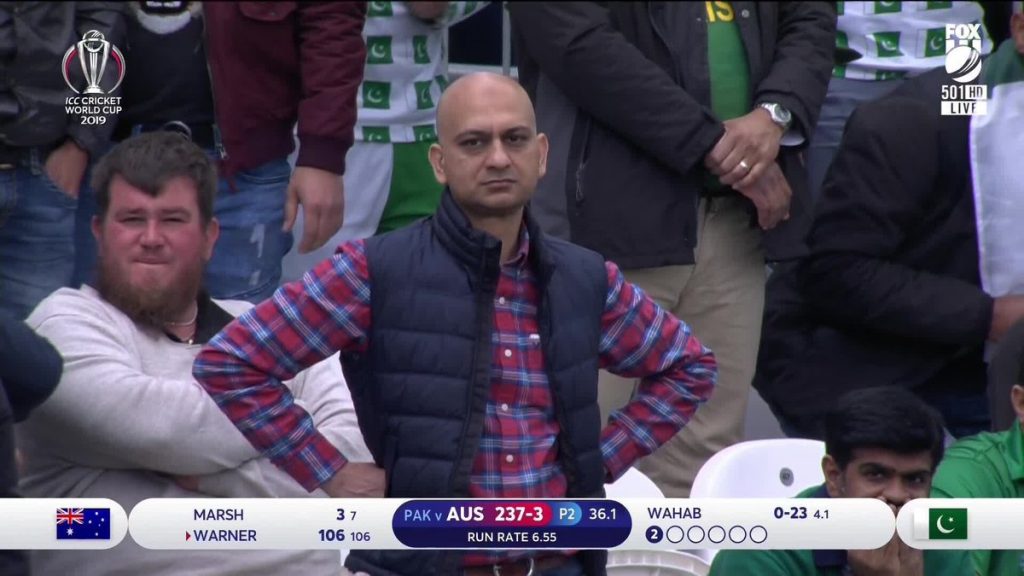 The internet is a funny place, one minute you’re a nobody and the very next minute you’re a legendary meme! Same happened with one of the match attendees in London during Pak vs Aus match whose reaction (other than summing up yesterday’s match) caught the attention of so many that he is now an epic meme and is all over Twitter and Faebook!

This Guy is the Mood of whole Awaam watching the teams fielding…. pic.twitter.com/RK9OTGQlXb

This is exactly how this guy turned into a meme with his epic reaction and the memes that have been floating around are absolutely hilarious and will put you in fits of laughter, because relatable AF!

Dettol kills 99.99% germs. The .01% germ after all its friends died pic.twitter.com/gHilDobfI6

You don’t mess with the genie

Me: And for my last wish, I want 3 more wishes

9 out of 10 Doctors recommend Sensodyne

How my mom looks at me when the e molvi in her iPad is giving lecture on obeying parents https://t.co/1BabbQ3H9O

When mom tells you that she won't beat you up if you tell the truth. https://t.co/H5MuzMYVHH

my one brain cell looking at me when i type two sentences of my thesis and take a break https://t.co/1EiefjQVvm

When you come home past curfew and dad is standing at the door https://t.co/RVeHDy85vV

Me looking at myself in the mirror after I tell the barber I really love the haircut pic.twitter.com/Vm1AyAhW1L

Us watching our batting collapse for the 1968719th time: pic.twitter.com/WRJLO3uqid

10 yr old me Breaks a glass
My mom: pic.twitter.com/EuuGtANiDi

Me standing at the airport waiting for the team to return. pic.twitter.com/Sk3ybg9ya4

Yes, the only two moods we have, there’s no in between:

My only two moods. pic.twitter.com/LoYemumpRz

Drinks directly from the bottle

Adnan Sami realising all the secret agent memes are coming back pic.twitter.com/DFqbFljnFP

Umpire: Am I a joke to you?

The umpire when Shadab takes a review pic.twitter.com/8B9JwPi0ZT

Teenday in freezer watching me order pizza for the 3rd time this week pic.twitter.com/k7ZYhs0V7i

When you see your friends enjoying their life without you. pic.twitter.com/OaHcsc4n7c

desi dad looking at you as you turn on the air conditioner pic.twitter.com/midsOvbZ2Z

Time to break out!

Hahaha, can all the husbands relate?

My weighing scale looking at me when I open food panda pic.twitter.com/kscS0ryR7X

Ah, someone pay him!

When you accidentally become a meme but don’t get paid for it: pic.twitter.com/rWwHxiCd2l

As the memes started trending, ICC joined in too by dedicating a symbol emoji to him!

What are your favorite memes? Let us know in the comments below!

Aamir Liaquat's daughter and his wife Tuba just can't stop throwing shade at each other!

LSA 2019: Here's who we think will and should take the fashion awards home!