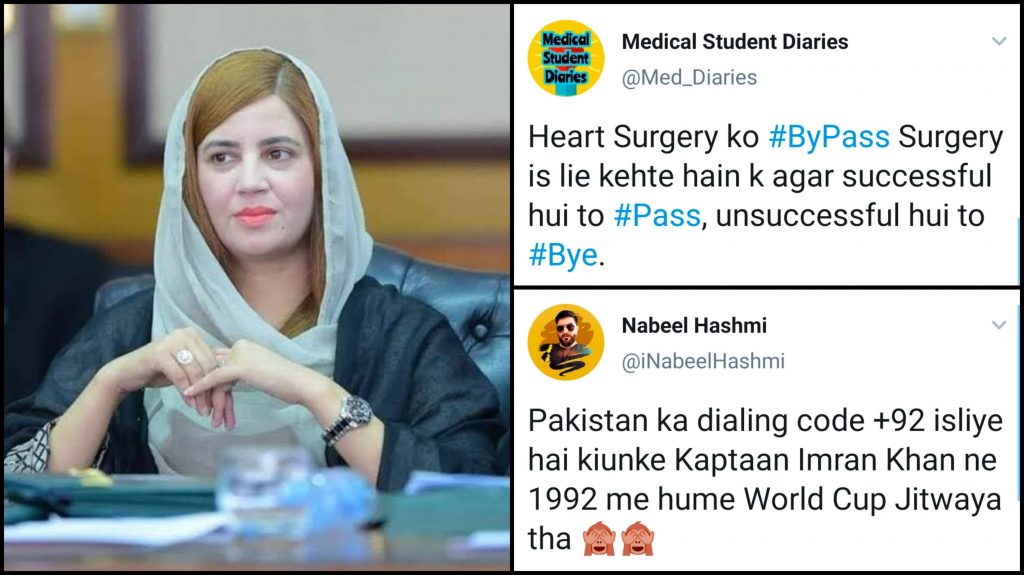 Minister of State for Climate Change, Zartaj Gul Wazir, had social media in fits after she gave a novel definition of COVID-19 on a news channel.

According to the minister, “COVID-19 means that it has 19 points that can be applied in any country in any way.”

And the country is having a field day churning out meme after meme!

iPhone 11 made its way into the memes too!

The “21” in MiG-21 means it flies only 21 seconds across border. #zartajgulwazir #coronavirus #COVID19 pic.twitter.com/0sFNc1Kbo7

Some even shared what the virus might be feeling:

The Doctors are screaming 😂

Some shared her take on T20:

You can even say the battery lasts for 3310 days without charging:

Some could relate to her:

Some actually took the time to have it all explained to her instead of making fun of her:

Please RT so that it reaches Zartaj Gul and she can stop embarrassing PTI voters. pic.twitter.com/iNfflIhNkv

And while it was all fun and games for some, others were genuinely concerned:

Zartaj Gul Wazir is an embarassment. Not because she does not know a single thing about the science & social impact of climate change, & COVID-19, & anything at all, but because despite being a minister for more than a year now she hasn't even tried Googling anything about them.

This zartaj gul shit isnt even funny anymore. Its outrageous. It makes me SO angry. This isnt a joke. We LIVE here. Shes the FEDERAL MINISTER, the PERSON IN CHARGE FOR 220 MILLION PAKISTANIS when it comes to climate change— the biggest most time sensitive disaster we're facing.

Genuine question @zartajgulwazir do you feel confident in your qualifications and expertise to successfully and effectively run the ministry of climate change, given it’s the foremost challenge facing our world?

Zartaj Gul then took to Twitter to clarify how it was a mere mix up of words and how the criticism only makes her stronger, you go girl!

What do you think about this mix up of words by Zartaj Gul and the netizens criticizing her? Let us know in the comments below!

A Bunch Of Privileged Kids Bullied An Autistic Kid & It's Not Okay!

10 Things You May Not Know About Adeel Chaudhry But Should!