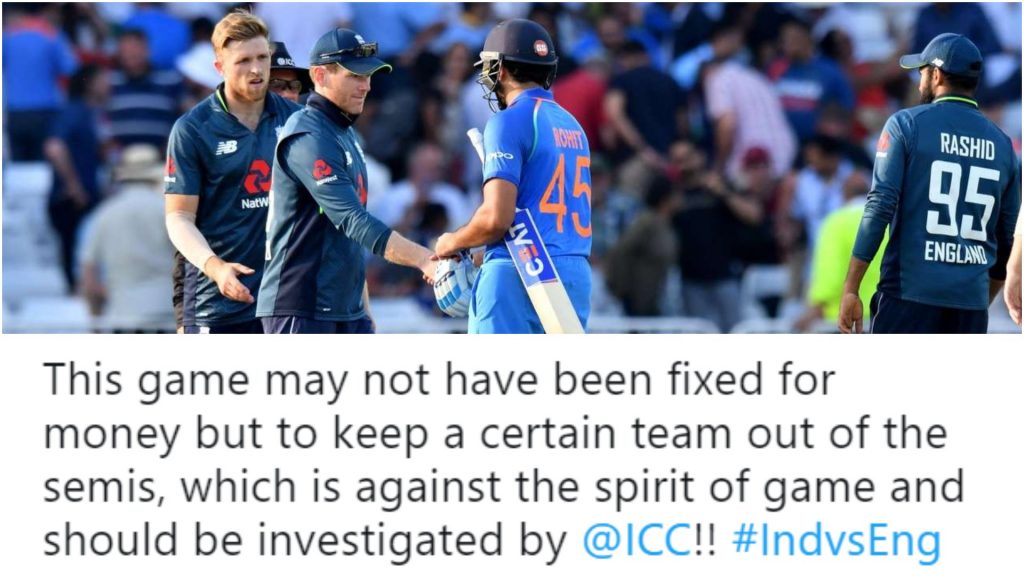 Yesterday India played against England and lost, a ton of Pakistanis were rooting for India to beat England. Had India won the match, the chances of Pakistan making it to the semi-finals could have been much better. But team India and their intent was pretty clear from their body language and lack of interest and the internet was not happy about it!

This game may not have been fixed for money but to keep a certain team out of the semis, which is against the spirit of game and should be investigated by @ICC!! #IndvsEng #ENGvIND @SkySports @ARYNEWSOFFICIAL

Many knew exact reason why:

Many compared world class.Indian team to that of Lagaan 😂

0% effort and 0% interest shown by indian team today in a world cup match which u r playing for your country,im really disappointed as a genuine cricket fan! Small people small mind! #INDvsEًNG #fixed

How on earth Indian team hit their first Sixer in the 50th over while chasing 337. They played like a Test Match in the final 5 overs. A lot of questions are being raised. #IndvsEng #ENGvIND. Did ICC and BCCI together fixed this match ? Has indian mindset currupted ICC as well ?

Many called it a surgical strike:

India carried out a surgical strike on itself to stop Pakistan from making it to Semi finals. #INDvsEًNG #fixed

Virat hitting boundaries so it doesn't look soo obvious that the match is fixed, a good captain, a good batsman and a good actor too.

Many thought it was a part of a more sinister plan:

For @ICC investigating India's suspicious loss to England is a clear case of match-fixing – a whole match fixed, not just spot-fixing. A whole team fixed a match to lose as per a sinister plan. @ICC wil lose moral authority by not conducting an inquiry in2 India's off performance

People couldn’t get over the fact that the first six was scored after 50 overs:

Aunty Gormint made an appearance:

People claimed that the Indian team was scared of the men in green:

I told you guys this match was fixed. #TeamIndia knows it well that Green Shirts are in great form. India lost it deliberately – they don't want to see Team Pakistan in the semi-finals. Shame on you India!#INDvsENG #indiavsEngland

People shared how even the commentators were baffled and in disbelief over a performance so poor:

But none the less, there was hope!

Do you think the match was fixed too? Let us know in the comments below!

Baaji Please! – Things We LOVED & HATED in the Film!