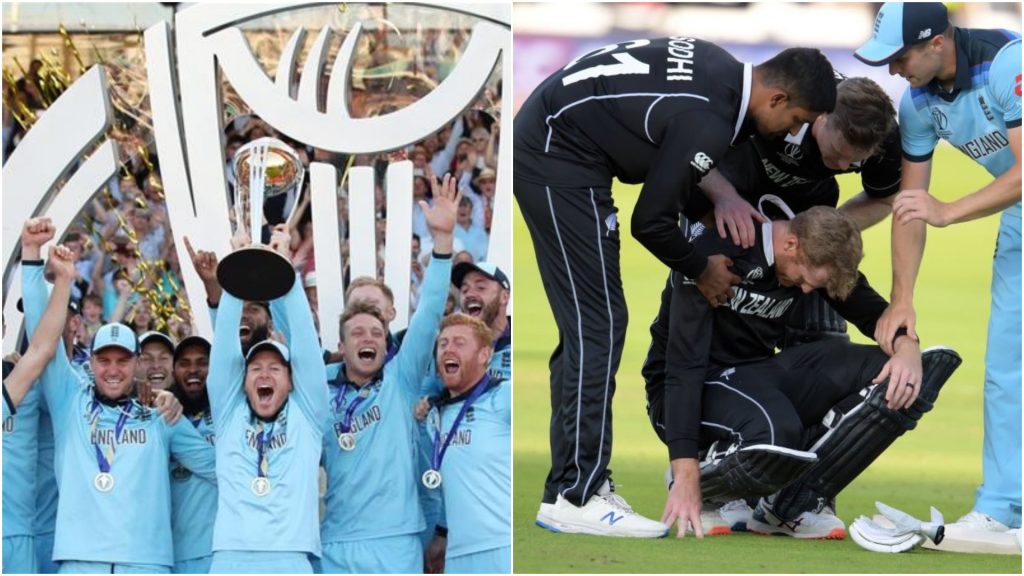 What started off as a boring final, turned into one of the most exciting and exhilarating matches in the ICC Cricket World Cup 2019! As the tournament came to a tie with both the teams scoring 241, the match then proceeded to a tie-breaking super over which blew us all away! I mean, it was one heart attack after another no kidding!

But England took home it’s first ever World Cup trophy defeating New Zealand by the finest of the margins and the fans were happy and heart broken at the same time! 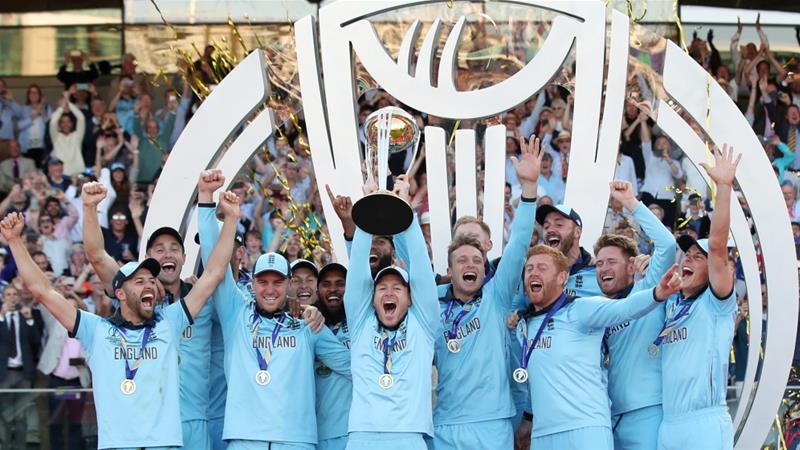 The internet was a whirlwind of emotions with every ball bowled, and even though we Pakistanis were out of the tournament since a time, you just can’t take cricket out of us!

I just love Pakistanis. No matter if Pakistan plays or not, we always have somebody to support amongst the two teams, and we support them with all our heart. 😂

A lot of people found the match to be boring initially, but boy oh boy, how tables turn!

What started off as a dull drag-on ended as the greatest game of cricket ever played.

Do not ever believe cricket is a boring game. #EngvNZ

People were loving the atmosphere:

What a wonderful choice of songs for a cricket final as amazing as this. #NZvsEng #CricketWorldCup2019

SCREAMING COS OF THIS MATCH. IMAGINE IF THIS WAS PAKISTAN PLAYING WE’D BE IN EMERGENCY RN 😭😂

We fell in love with cricket for this day. Didn’t we? What a match!

Even seasonal and clueless fans like Piers Morgan couldn’t resist showing their excitement:

I’ve no idea what the f*ck is going on but this is the greatest game of cricket I’ve ever watched and the excitement may kill me.

And then came the unbelievable over throw that got England the 6 runs they were desperate for, if that isn’t good luck then we don’t know what is!

The 6 runs absolutely turned the tables for England and Twitter lost it!

That four on overthrow would be remembered for generations … unjust, yes, but quality stuff

THIS MATCH HAS NOW OFFICIALLY OVERTAKEN THAT AUSTRALIA-SOUTHAFRICA SEMIFINAL AS BEST EVER ODI INTERNATIONAL.

Even Mahira Khan was losing it:

Being a cricket lover, what a day to be alive.#CWC19Final

England really lucky New Zealand should have won, first that boult catch that carried for six & then the overthrow that hit stokes, kia qismat hai

New Zealand put up such a strong performance that people wanted a trophy for both the teams:

CAN WE PLS HAVE A WORLD CUP TROPHY FOR BOTH THE TEAMS.

Karan Johar too shared how he had been enjoying the match:

For someone who was never a sports person! I have behaved out of character and screamed insanely with my Mother watching tennis and cricket!!! Tennis broke my heart but I am still hoping for NZ!!!! This match is insane!!!!!!!

This match is more dramatic twists and turns than an Abbas Mastan movie.#NZvENG

And as the match came to a tie and entered its super over, the tension was REAL:

It all comes down to SUPER OVER.

Super Over. Tie-breaker. Find me something, anything, that can come close to challenging live sport

I can feel the tension in my bones. #ENGvsNZ

Its probably gonna take decades for another worldcup final to be this exciting and crazy. Whatever youre doing, leave it, switch on your tv and watch the super over.

Another thing that had the fans wooed was the fact that Jofra Archer had tweeted the same score years earlier: 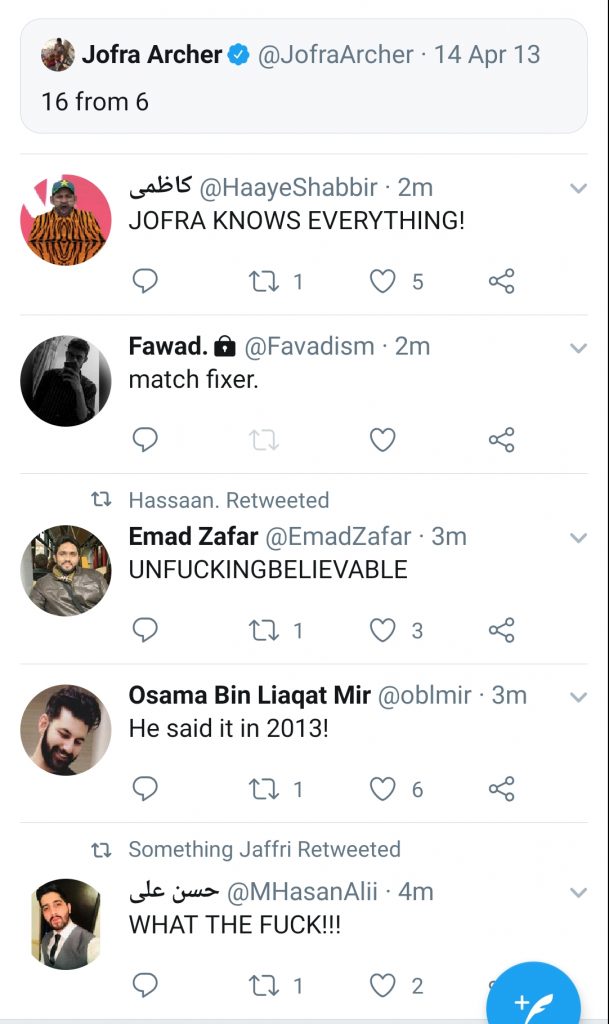 You've got one, Jofra https://t.co/kDQqbdpIzL

morgan: "just tell me what's happening on the last ball i know you tweeted it already" pic.twitter.com/siLV4zTf2Q

Only to realize this:

Among other things, what I learnt from this worldcup is that Jofra Archer has a tweet for everything.

The super overs came to a tie too!

But the team that scored more boundaries was the winner:

England hit more boundaries. Can u believe it !!!!

Haha for all the British Pakistanis:

At least all Pakistanis with British passports will be happy. 😅

This was the greatest story that we’ll live to tell…

Extremely proud of be a cricket fan to be able to witness the greatest World Cup final of all times.
Going to tell my grandkids about this match. One hell of a game.

You may live a hundred years and still not witness a World cup final better than this. Amazing cricket. Well played NZ, Congratulations England, finally.

I've seen everything in my life now! Best ever World Cup Final! #CWC19Final

What did we do to deserve this fine day?

They tied the match and the super over. We have witnessed the best world cup final in the history of cricket.

Many people were mad the the criteria to choose the winning team:

Sports are a scam and I am never watching any of it ever again.

Cricket rules are a bloody joke. England just pulled off one of the greatest sport robbery of all time.

NZ have always won spirit of cricket awards for being the “good guys” and again they went down due to some questionable rules of the game. Mad respect for them, even after 4 off the throw Williamson did not intervene! I cannot imagine any other Captain not arguing with umpires.

And while England won the match, people were all feels for the New Zealand team:

What a thrilling game of cricket! It’s not over till it’s over. 😅Congratulations @englandcricket it finally came home 🏆
Hard luck @BLACKCAPS but a fighting effort from the lot 👏🏼 👏🏼 #ENGvsNZ

What a bloody final!!! Eng one second and NZ another. Both teams showed immense mental strength. Congrats to England! Feel proud NZ. Cricket was indeed the winner. Best final ever! ZABARDAST #ENGvsNZ

Have to feel for New Zealand. They were brilliant and unlucky. Well played.

#ENGvsNZ #CWC19Final Congratulations to England…. But NEW ZEALAND is my CHAMPION!!!! What an amazing nation and what a brilliant team…. ❤️

And well played kiwis .. you won our hearts ♥️ and now you earned our respect too.. #meninblack by far the best team of the tournament..

WHAT A FINAL!!! Congratulations England 🙌🏽 but only love for the New Zealander’s !! what a World Cup final these two teams have put out for us. Cant get a better treat for the cricket fans & world. Cricket wins 🏏👏🏽 #CWC19Final

The stroke of luck for Stokes.
I feel for NZ and Williamson.
And I feel for Federer after being match points up.
Amazing sports day though.

I cannot decide what has made my heart break more; Pakistan not qualifying or NZ losing. Kane Williamson. 💔

i’m not crying
you are pic.twitter.com/vgFHkoOZXp

Imagine not losing in a World Cup final twice and yet still not winning the World Cup. How do you cope with that?

Smiling through the pain~

Me after looking at Kane Williamson's fake smile. #CWC19Final pic.twitter.com/fyjM7yd9d6

There were some bitter Indians too but they were served right….BURNNNNNN!

We didn’t but if you guys need any tips to beat NZ or Eng do let us know https://t.co/plH6KWIa4r

Moral of the match:

MORAL OF THIS FINAL : HARD-WORKING AND LUCK BOTH ARE EQUALLY IMPORTANT, ESSENTIAL AND MATTER AND ALL OF ABOVE NZ DOES NOT DESERVE THIS.😩

And here’s the best that this World Cup bought with it:

Haha, can we please have the next World Cup in Pakistan? 👀

So here's an interesting fact:

At the end of the day, you can’t deny that we beat both the teams, WIN!

Guess who beat both of these teams?? pic.twitter.com/GTjLisj97h

Anyway we beat both England and New Zealand so pic.twitter.com/69BeWVoeCp

Divided by borders but united by the love we share for cricket! And while some of us may be upset about the World Cup ending, you have T20s coming up to look forward to!

5 reasons why the 'Heer Maan Ja' trailer has us excited for the film!

The Government of France celebrates 230th Bastille Day in Karachi