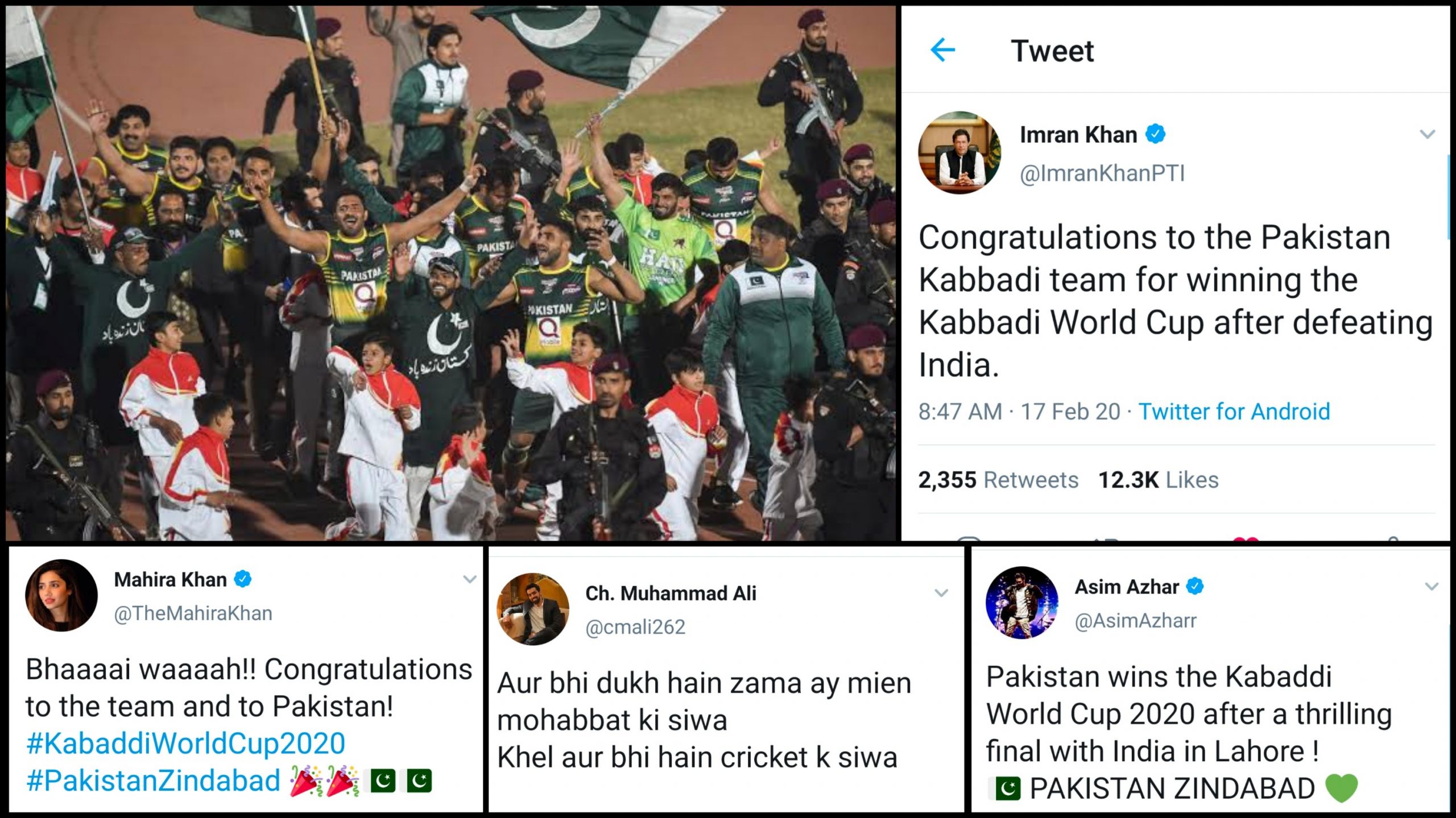 This is the first time the Kabaddi World Cup was held in Pakistan, we just weren’t the hosts this time, we were the winners too! 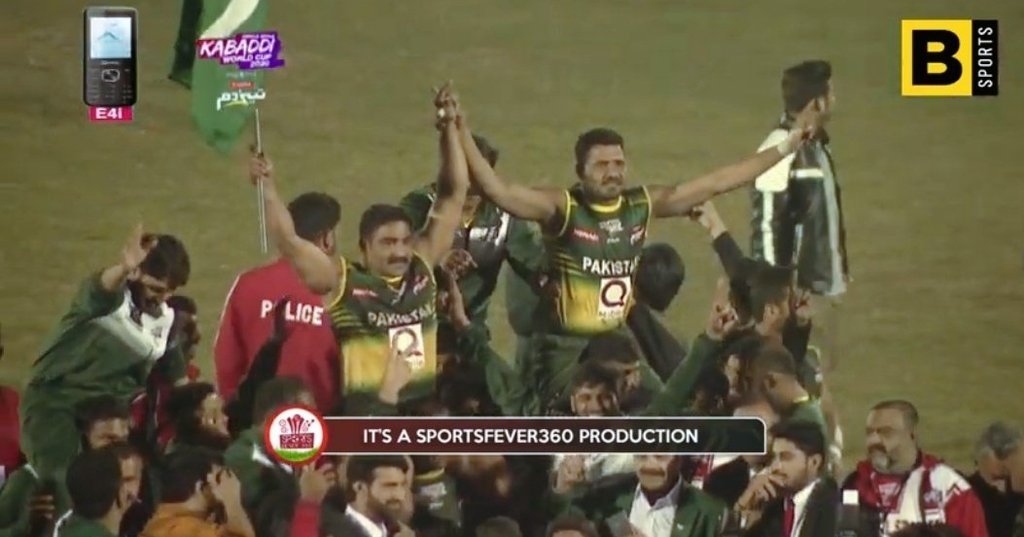 The tournament was eight-day long with matches in Lahore, Faisalabad, Kartarpur and Nankana Sahib. And teams that participated included India, Iran, Canada, Australia, United States, Sierra Leone and Kenya! And as the news broke, people were congratulating and cheering for the team all over social media! 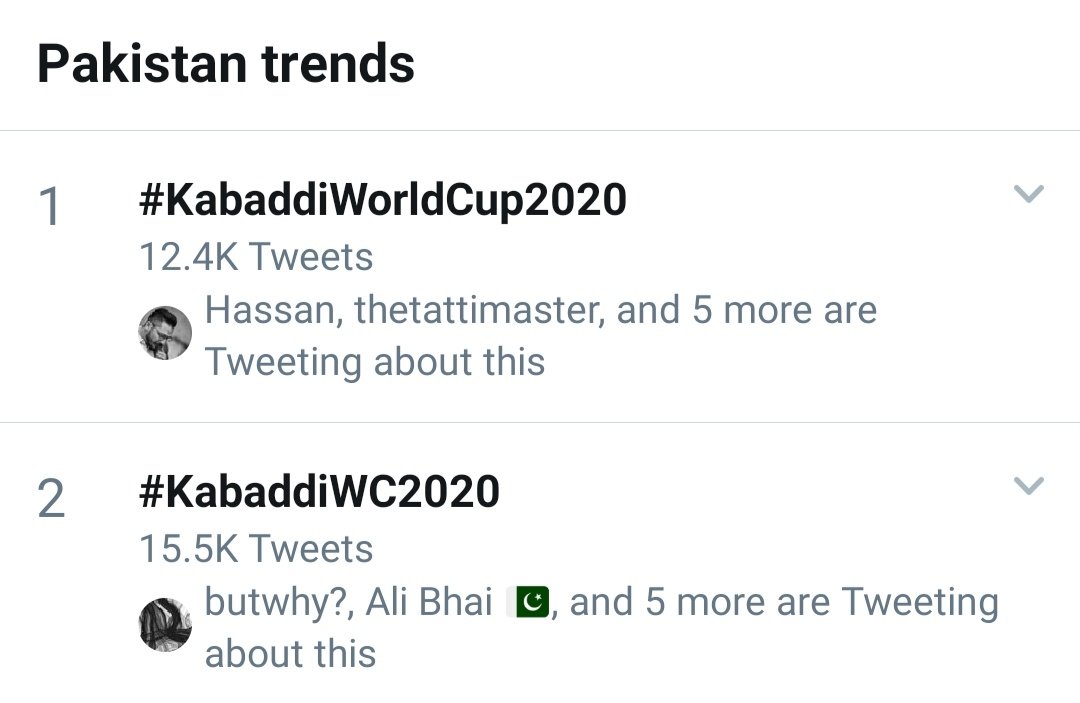 Congratulations to the Pakistan Kabbadi team for winning the Kabbadi World Cup after defeating India.

It was a close win!

Game Changing moment of today's epic encounter.
This video shows the level of commitment and sheer briliance from Pakistani defender which changed the fate of whole match by the grace of Almighty Allah SWT. #KabaddiWC2020#KabaddiWorldCup2020 pic.twitter.com/xFTXTca0qL pic.twitter.com/DWPBiZnoUA

Congratulations were pouring in:

Congratulations Pakistan on winning the Kabaddi World Cup after winning a closely fought FINAL against India in Lahore. Loved the Punjabi commentary. #KabaddiWC2020

Maza agya😘😘 At the end of first half they were 6 points behind and ended up winning the World cup ! Surely the Unpredictables for a reason ! 😍🤞#ApniMittiApnaKhel #KabbadiWorldCup2020 pic.twitter.com/EOQiRlToVd

People were living for the commentary!

This commentary is more entertaining than the Match itself. #KabbadiWorldCup2020

Well you gotta root for that punjabi commentary too.#KabbadiWorldCup2020 https://t.co/JlLsF9vJMk

People were excited for the win:

It was an absolute full house:

We’re a nation so full of love:

Scene during final of #KabaddiWorldCup2020.

Pakistanis respect each other no matter the religion. And this shot of commentary box speak a million words.

This is Pakistan you could never be like, India. #PakistanZindabad pic.twitter.com/Bt2MgxrFpM

People who attended the match were sharing what the atmosphere looked like and it was insane!

I don't have the words to describe the excitement and energy I witnessed at Punjab Stadium today. Unreal scenes!!!#KabbadiWorldCup2020 #Kabaddi pic.twitter.com/S2ZVlOie9L

Congratulations, #Pakistan for winning The Kabaddi World Cup 2020! We need to refine our Stoppers, but our Raiders are the best in the world! Finally, a title to our name!#KabbadiWorldCup2020 pic.twitter.com/QsSBB6khHf

Is trophy py sirf PAKISTAN ka haq hai ab. I still remember when India beat Pakistan because Referees were biased. It kinda broke hearts of me and many sporting fans but today In Pakistan, in front of home crowd, Indeed Allah had better plans for us.#KabbadiWorldCup2020 #kabaddi pic.twitter.com/BY095APxod

Congrats to Pakistan for Winning the #KabbadiWorldCup2020 . We are all very proud of our players . I urge Federal Sports Minister Respected #DrFehmidaMirza to Honour them also @ShezrehMirza

People were also thanking the Indian team for coming to Pakistan:

Congratulations team pakistan 🇵🇰 n thanks team india for coming to pakistan despite of not getting clearance from Indian government. #KabaddiWC2020 pic.twitter.com/XUqK2fGHzB

The celebrations were crazy!

Haha, the win was fantastic!

Congratulations to team pakistan on winning the Kabaddi worldcup
You all are the champions
Proud of you all
The win is fantastic😂❤
#KabaddiWC2020 pic.twitter.com/N5JLJFyW9l

Many were throwing shade on the losing team:

Are you excited about this win? Let us know in the comments below!

From University Outfits to Work Outfits- Bonanza Satrangi Summer Collection Has All the Options!

People are in love with the SSG gang reuniting and their sharartein!

Comedian Shehzad Ghias Sheikh made satirical posters on Mard March and the internet is loving it!