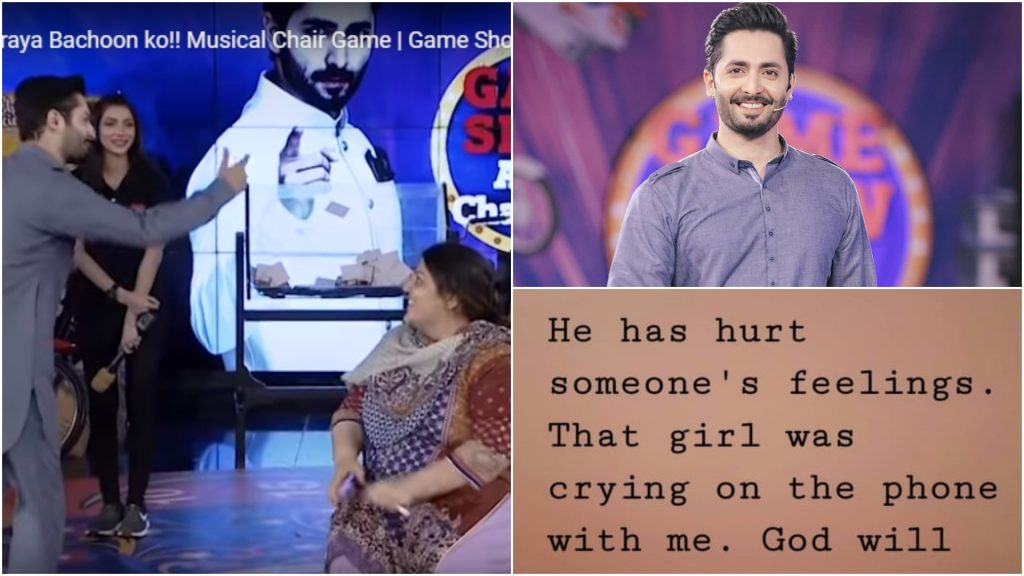 Danish Taimoor who has been hosting a game show on BOL TV called Game Show Aisay Chalay Ga has upset a lot of people after he blatantly fat-shamed one of the show attendees who was contesting in a round of musical chairs on his show as seen in the video below.

Throughout the game Danish Taimoor did not miss on a single opportunity to call her aunty, moti aunty and caution others about her weight… The channel even uploaded the video to twitter with the caption saying ‘Aunty ne haraya bachon ko,’ I mean its 2019 and people like Danish Taimoor still think shaming someone for their looks is funny *SMH*

The girl kept on insisting that she’s not an aunty and even offered to show her NIC for him to stop calling her aunty. With every passing round, his taunts only increased and she was the sole target of shaming throughout the segment.

People were furious over Danish Taimoor targeting her and expressed their disappointment via various social media platforms:

So, #danishtaimoor is pretty despicable – in a long line of Pakistani male celebrities who think they are funny. #BodyShaming isn’t humorous Danish, neither is hurting someone’s feelings. Cracking jokes on how someone looks just really shows what trash you are.

Another user posted the whole story of what went down during the show:

The woman is hurt you can check and contact @xeracurvyco on Instagram for the details. I got to know through her insta stories.Body shaming is all around us. Judging has become such an automatic response that people tend to do it without any prior thoughts. #danishtaimoor pic.twitter.com/TWaJRL6vWP

Some people to find humor in degrading someone else’s body. U don't know what one goes through when you make jokes on their weight.Becoz u have no idea what they are struggling through. It could be genetic or due to medical conditions, which u have no idea about. #danishtaimoor

Danish taimoor needs to make a public apology to the woman he humiliated. It's not funny to comment on woman's body on public forum.#danishtaimoor

I am totally totally disgusted with #DanishTaimoor who Body Shamed a lady in his game show on #Bol Tv. He was continuously saying her "Anti" and like "Bacho bach k rehna anti se". Agr apko us se itna hi masla tha to ap pehle hi usse khelne se mana kar dete youn bar bar kisi ki insult karna kahan ki entertainment hy? I saw many times #FahadMustafa doing the same thing in his show. Why plus size people are always on hit. Like kahan mar gaye hain ethics celebrities k 🤷 Did he even imagine what that girl was feeling after continuously listening such trash comments by him. I can literally feel her because being a plus size I know how bad you feel when you have to bear such comments on daily basis. When this society will accept plus size people. When they will stop body shaming and skin shaming? Every human being has right to be treated with respect . I really want @danishtaimoor16 to publically apologize for humiliating this girl on his game show. Social media has power and we can make him to do this. #riwaajkhaana #saynotobodyshaming #ipledgetoendbodyshaming #bodypositive

Fans bombarded him with comments under his photo, most of which have now been deleted: 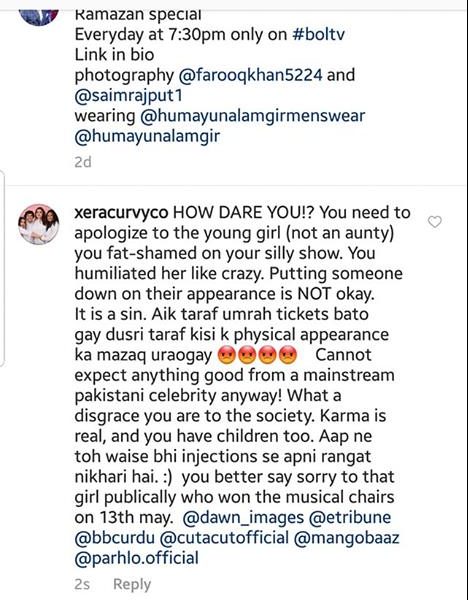 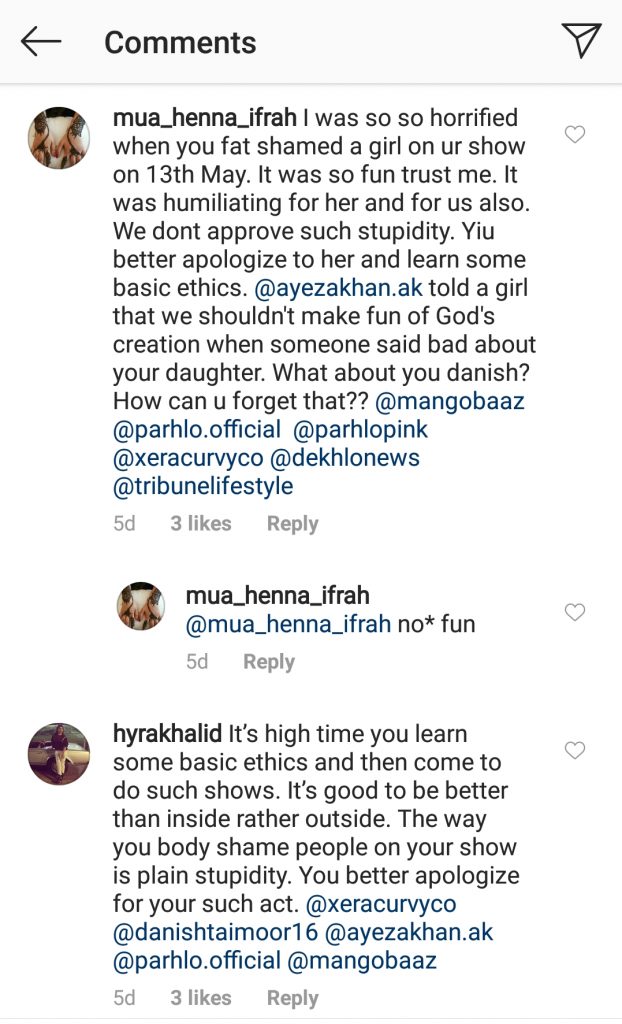 An even more stupid segment takes place in Fahad Mustafa’s show where he calls women and weighs them on camera, subtly fat-shaming them too as he’s at it.

The issue was first raised in a closed group called Xera Curvy and Co that promotes body positivity and is constantly trying to lift other women who face all sorts of body shaming at the hands of the society. Just because someone is on the heavier side, it does not give you the right to publically humiliate them or belittle them. BODY SHAMING IS NEVER OKAY! When will our celebrities actually learn some manners?

Historic Pictures from Golden Era of Pakistan will make you say ‘woahhh!’