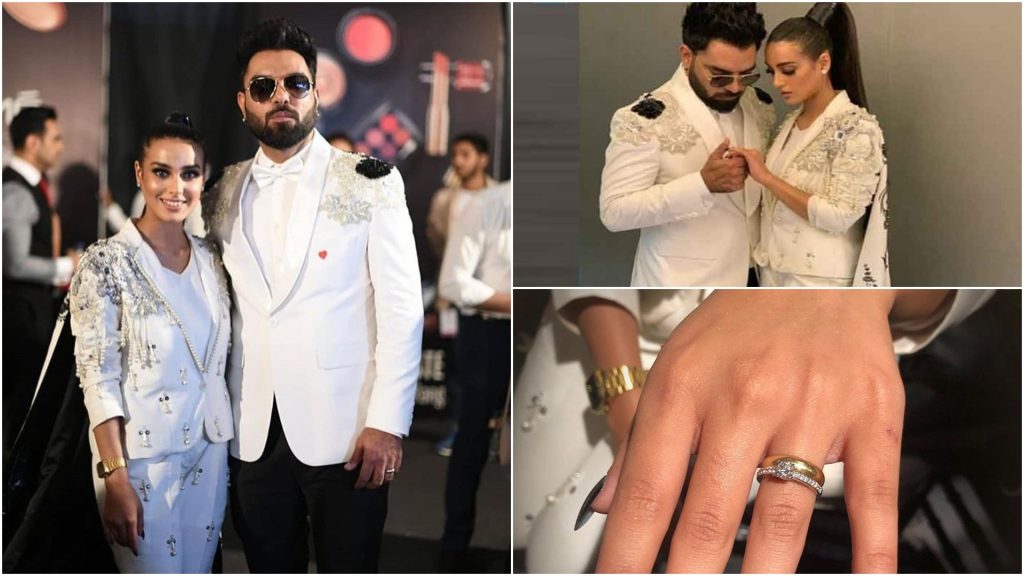 So last night at the LSAs, Yasir Hussain proposed Iqra Aziz on his knees, with a ring that we’re living for! Love was literally in the air last night.

A post shared by DIVA Magazine Pakistan (@divamagazinepakistan) on Jul 7, 2019 at 1:50pm PDT

And if you’ve been curious, here’s the ring!

#DivaReports: #YasirHussain and #IqraAziz made it official in a way much grander than we expected, at #LSA2019, while Yasir was hosting the award show. The ring presented to Iqra truly is beautiful! @iiqraaziz @yasir.hussain131 Photo by @luxstylepk

Many found the proposal to be really cute, love and tons of prayers were being sent to Yasir and Iqra from their family, fans and fellow colleagues.

And while many were loving the gesture, a ton of people on social media were not happy:

imagine marrying a homophobic and insensitive person with 0 sense of humour… https://t.co/JkdREwnhXb

Many thought Yasir had hijacked Iqra’s night to shine:

A man hijacking her defining moment just to propose her. Sad. https://t.co/b8ut23nL4I

I think Yasir Hussain stole Iqra Aziz’s thunder by proposing her on one of the biggest nights of her career where she won best actress award.

Their little PDA triggered a ton of people:

What is this men!!
Shame on both of you guys. #IqraAziz #YasirHussain
It's Pakistan Not a European country.
Nd you are not a married Couples.#Astagfirullah#LSA2019 pic.twitter.com/uAVG6wjxrO

People were grossed out:

Some suggested that Iqra takes a bath asap!

And #YasirHussain proposed #Iqraaziz in #LSA2019 And his PDA started

Someone pls ask iqra to wash herself with aab.e.zamzam 😒😒😒 pic.twitter.com/IMz7c4klBL

Welcome to the islamic republic of pakistan.
WTF is this jani @ImranKhanPTI . pic.twitter.com/rsQSOARohi

Some thought that proposals are a very personal thing to be shared with hundreds of people:

i find public proposals to be kinda… trashy. and overdone. to each his own tho. i personally would not want to involve anyone else in such an intimate moment – especially WHILE it is happening 🤷🏽‍♀️

If this is what they are doing in front, Imagine what would they do in private?? 🤮🤮🤢🤢🤢😭 #IqraAziz #SastaComedian #YasirHussain

It was embarrassing to see #IqraAziz and #YasirHussain. It brought on anger for Yasir, and a sad feeling for Iqra. True love is smthg spiritual and shys away from the public eye.#IqraAziz pic.twitter.com/Rqk9ajsdYy

Some found it really weird:

Some were pretty observant:

Everyone is busy criticizing the action of both #IqraAziz and #YasirHussain whereas no one noticed that is sab main us bichari ki mushkil se chipkai gai pony gir gai.
Feel sad for the little girl pls!? https://t.co/fPpY7C0OAC

And there were way too many memes!

Reminds you of someone?

That one aunty in ur relatives that won't stop kissing u everytime she visits ur home.🤮#LSA2019 #IqraAziz #YasirHussain #Pakistani pic.twitter.com/ZE5zyA48y8

Some thought he was inspired by Bhai:

Even Imran Hashmi was compared:

Many found the leaked footage…

Some shared how they felt about the proposal step by step:

what was that proposal?! 👀
– it was bearable till that hug
– those kisses and everything like seriously when the senior actors are sitting there
– + when on air these are watched by families 🤦🏻‍♀️🤦🏻‍♀️🤦🏻‍♀️🤦🏻‍♀️🤦🏻‍♀️🤦🏻‍♀️🤦🏻‍♀️
Maintain some decency Fgs#LSA2019 #IqraAziz #YasirHussain

Many wanted to call in PEMRA:

You guys are public figure, atleast you should think what impact this act will create on audience. You are not married and also not in Europe. @reportpemra Pemra should take notice of all this shit. They should notice about what they are trying to deliver their nation. 1/2 https://t.co/NvYBZs9p5W

And while there were tons of memes and backlash, there were people who spoke out against the trolling:

"hawwhaye apni fiance ko publicly kiss kar lia taubah taubah".
Stfu parween, just because your cousin/husband/Alhumdullilah4Everything feels ashamed to even hold your hand in a park doesn't mean others can't do it either

Are you guys pissed cause your partner or partner to be would never kiss your face in public? Get a fucking job and focus on that other than sticking your whole self in someone else's personal life.

at least they are now comitted for halal relationship not like many of us doing haram stuff ,asking nudes doing sexting all night long and than criticize others#iqraaziz#YasirHussain pic.twitter.com/Matvt0OEdM

A few harmless kisses on the screen have some of you begging the gods to save your ‘eeman’ but you never feel the same kind of terror when reading about acid attacks, honour killings and frequent incidents of child abuse.

Thats none of our business if someone hugs, kisses or fucks her girlfriend in Public as far as its not interfering our personal life. yes im saying this about Iqra & Yasir

I hate #YasirHussain to the core, because of his potty thinking and so called "Oscar" level jokes.
But I'll never ever in my dream say/joke anything about his personal life. #LSA2019

What do you think about the proposal? Let us know in the comments below!

the internet is bashing Nida Yasir for being a total show off!