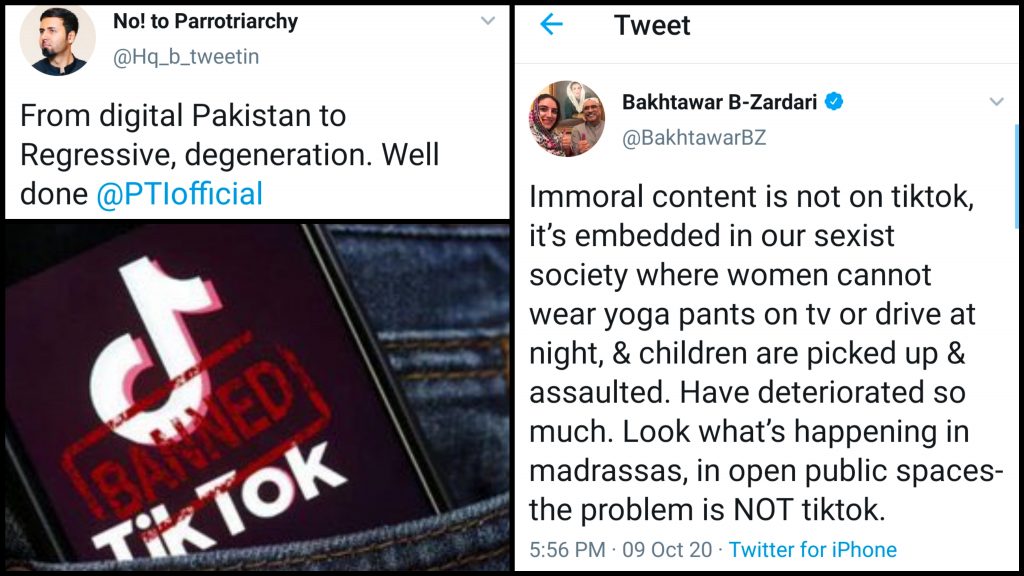 Tiktok has been facing quite the backlash in Pakistan for indecent content, and PTA has finally taken notice of all the complaints and banned the video-sharing app.

In view of number of complaints from different segments of the society against immoral/indecent content on the video sharing application TikTok, pic.twitter.com/Vmp5umixeL

According to PTA, they gave the developers a considerable amount of time to filter the immoral content, when it failed to comply, PTA banned the app altogether. And people have a lot to say!

Immoral content is not on tiktok, it’s embedded in our sexist society where women cannot wear yoga pants on tv or drive at night, & children are picked up & assaulted. Have deteriorated so much. Look what’s happening in madrassas, in open public spaces- the problem is NOT tiktok.

Iqrar-ul-Hassan shared how banning was not a solution:

Many were calling it a bad decision:

This is a bad decision, TikTok is a unique app in that it gives anyone the opportunity to get big and do something with their reach, where else would an average Pakistani make content and gain a following? Like that sindhi guy making baked bricks in his village with 1M followers. https://t.co/kz9GRNHTFM

People were calling it regressive degeneration:

People were sharing how they knew people who were solely earning via Tiktok:

My friend left his job to start an ad business on TikTok. He was employing people & making Pakistanis on TikTok money. Today the PTI government because they cannot control content reflecting people’s anger at poor governance banned TikTok and destroyed his livelihood #unbantiktok pic.twitter.com/7Qr6y1Xtfy

People were fearing that banning Tiktok was just the beginning:

I fear the #TikTok ban might be the beginning. Many other platforms could be in the line of fire given the grounds.

Many found that this was the country denying rights to it’s citizens:

PAKISTAN: In the name of a campaign against vulgarity, people are being denied the right to express themselves online. The #TikTokBan comes against a backdrop where voices are muted on television, columns vanish from newspapers, websites are blocked and television ads banned.

Fucking clowns. That’s what happens when only 1 institution is in control of everything. https://t.co/l8OVmS3mSq

People were calling it a violation of their freedom of expression:

So you can’t find immoral or indecent content anywhere else on the internet or mainstream media for that matter? Shitty logic as always and a. Blatant violation of our freedom of thought and expression.#tiktokbanned https://t.co/74Huu9teEY

People found the ban to be unfair:

I never used Tittok, but this is next level shit from PTA. They should focus on bringing digital rights &telecom reforms in Pak. All they are doing is banning apps for no particular reasons. This is what happens when you bring people in charge with no ties to the field at all. https://t.co/LhKCpBnu11

People were thanking their favourite tiktokers:

U can criticize them for so many reasons but they provide us so many entertainment 🔥 …. Thankyew all Ticktokers for making our quarantine special ❤️ #TikTok pic.twitter.com/V3fyB67YCj

People were feeling sad for Jannat Mirza who recently became the first Tiktoker in the country to cross 10M followers:

Feeling sad for Jannat Mirza who recently got 10 million Followers on #TikTok pic.twitter.com/Cdg5SQw9AX

People were waiting for twitter to be banned next:

Can’t wait for Twitter to get banned too just so we can get rid of this godforsaken app. https://t.co/BDYdXmRLUb

This isn’t a thing!
Why should we ban apps?
Who’re you to ban?
No laws, Just in the name of immorality and other content you are banning @tiktok_us ?#UnbanTiktok. https://t.co/It79yMTfqs

This entire society is immoral and indecent. Ban it as well https://t.co/POyVcRTCqn

Is there any chance of banning….umm…..PTA?

In view of number of complaints from different segments of the society against immoral/indecent content on the video sharing application TikTok, pic.twitter.com/Vmp5umixeL

And while many people were saddened by the decision, others were lauding PTA:

People were thankful for the ban:

Thank God, We are free from this virus now 🙏 #TikTok pic.twitter.com/STDCf1sEqr

Memers and Youtubers were celebrating:

People across the border could relate:

People had ample of memes:

People were calling it the biggest news of the day:

What are your thoughts on the ban? Let us know in the comments below!

There's Now A Chai Flavoured Ice-Cream With Paratha Cone & The Internet Is Screaming!

People demand tik tok to be banned in Pakistan