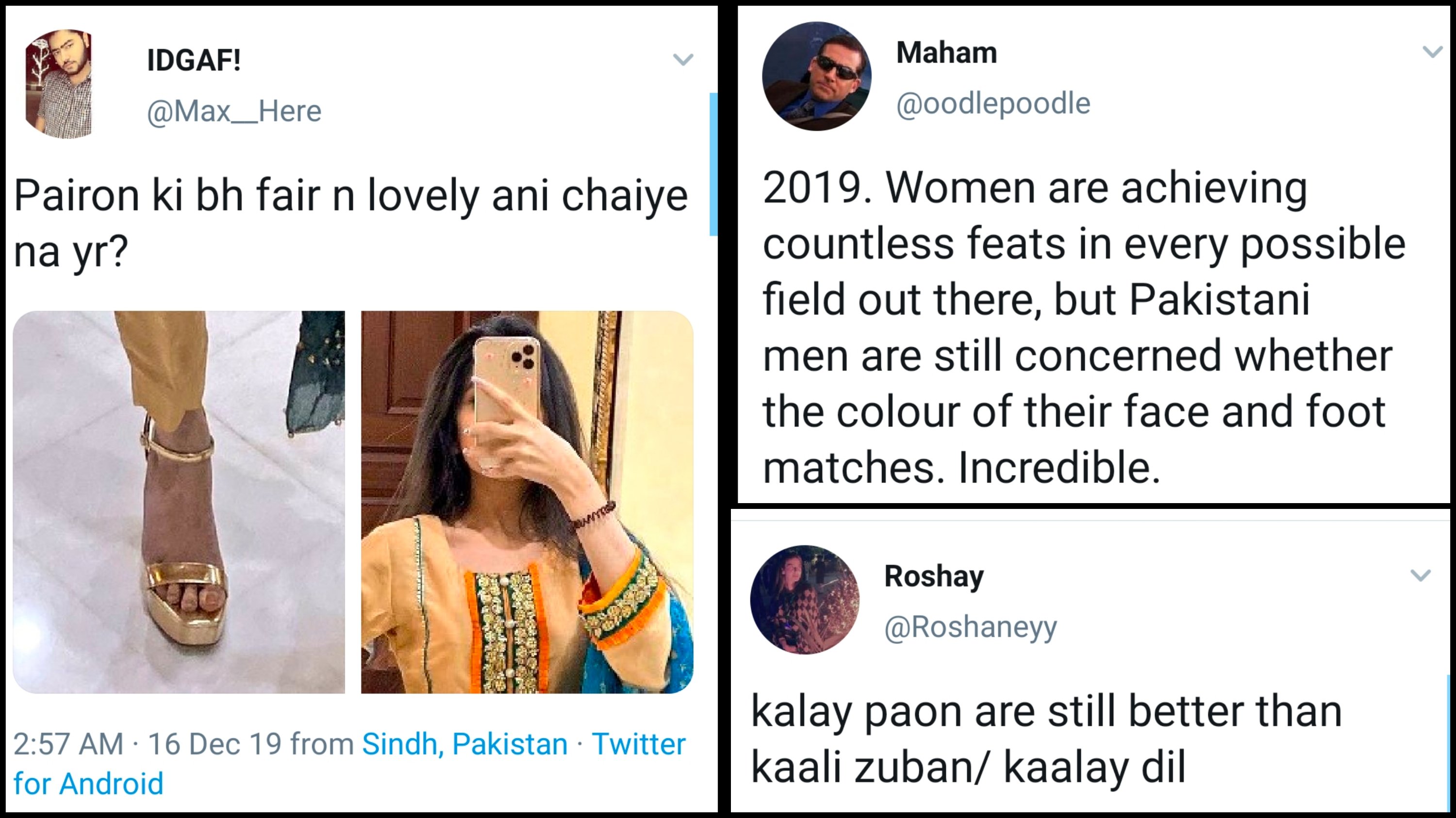 Body shaming is not a new phenomenon for desis, because yeh toh humari national hobby hai. A guy on Twitter with a little too much time on his hands posted a picture of a girl shaming her about her complexion:

Oblivious to the fact how shadows and lights work, the guy had a strong opinion on how there should be Fair & Lovely specifically designed for feet, and the internet was just not okay with it:

Shame on you people who have no idea how lights and shadows work. Shame on you for putting so much pressure on girls like this. Shame on you for thinking we all should look like a fairy tale princess fair from head to toe. Feet always appear dark when you're standing in light.

If you don't don't know how lights and shadows work educate yourself rather than putting BULLSHIT over here, and no matter how her feet look it's non of your fucking concern. Unless apko Chaatne hain.
Tum haseen farishtay Ho ya Humse Pari hona expect krte ho jahilon https://t.co/lG6qyPS085

They say men will be men:

2019. Women are achieving countless feats in every possible field out there, but Pakistani men are still concerned whether the colour of their face and foot matches. Incredible. https://t.co/YceakZeu2t

People were calling him out on his racist tweet:

Racist comment!
Every human is beautiful be their skin fair, brown, black or whatever color. https://t.co/cIQnXrycy9

People were sharing their struggles:

I have acanthosis nigrans. I have really dark finger knuckles despite of 100's solutions I tried. Sometimes its not about maintaining hygiene or skin care. It is what it is. Paon hath munh ka rang milany say bhtar hai match your words with your actions.Ajeeb jaahil! https://t.co/mkxcp1fZ7F

What about a fair n lovely for a dirty soul ? https://t.co/xWBFERHkXb

Some people are still stuck in the 18th century:

Dude has 3 filters applied on his display (still ugly tho) yet has the audacity to comment on someone elses complexion.
U look like a roach, crawl back to your sewer hole https://t.co/dK63vBuO8O

People were suggesting he uses Harpic:

We need something to clean that filthy mentality of yours too https://t.co/gqo9xAWixQ

People were hoping he’d grow up:

idk who is she but posting a picture of someone without them knowing because you think they look funny is not okay. it makes you an asshole and you should think about how your actions impact others and grow up a little. https://t.co/UAl89EZegt

A public service message from the netizens:

It’s an achievement if you ask him:

The saddest part about it is this fucktard failed to notice the lighting difference and the concept of "shade" flew right over his empty head yet he decided to make a complete nonce of himself thinking he actually did something. https://t.co/Q1DhDljyNR

People were asking him to stop trolling people based off of their skin colour:

please don't do this. stop trolling someone atleast on the basis of their skin color. tks

Only trash men can do insensitive tweets like this and give attention to similar tweets by others without thinking for a second how that girl will feel..
Go suck some white feet and choke on them you scumbag https://t.co/IjkxVlNGUW

And while majority of the people were calling him out for body shaming, there were certain people who found the tweet funny:

Turns out he wasn’t the only one who needed to attend physics classes again:

I also noticed this 😂

Women bringing other women down:

What do you think about the tweet? Let us know in the comments below!

Diva 2019 Round-Up: Male Models That Defined the Industry This Year