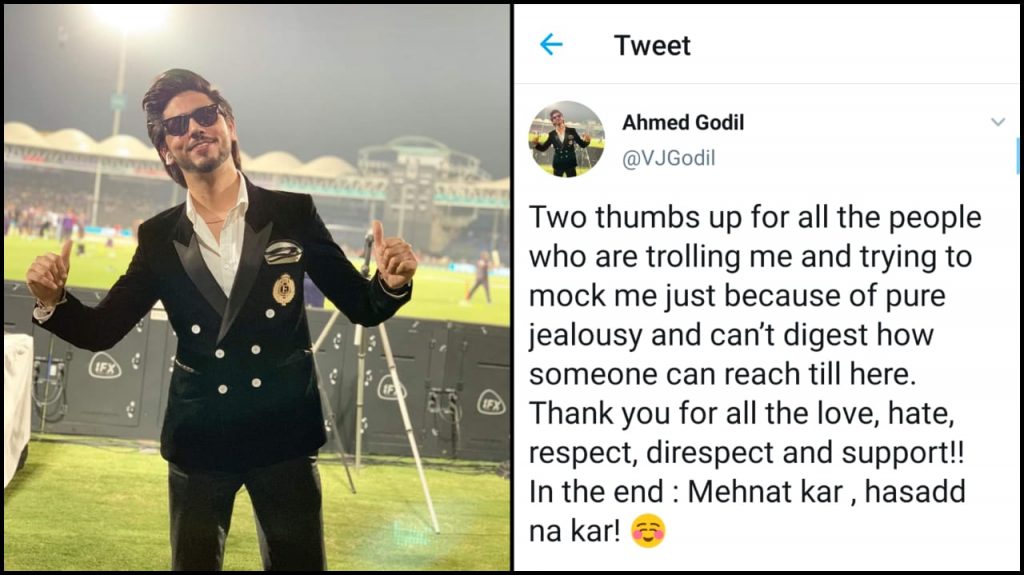 As the opening ceremony of the Pakistan Super League 2020 kicked off on Thursday, Pakistanis on social media found their mocking stock in Ahmed Godil, with memes on him throughout the match.

*Billions of people on earth and PSL management only got this clinical picture of constipation, AHMED GODIL, out of nowhere to host the most awaited event😑

People were annoyed with the repeated ‘Tayyar Ho’s’

People were calling him the most hated person:

People were just not amused:

People were criticising his skills:

So Ahmed Godil is hosting #PSL5, a very talented guy from karachi, i know him since years but the guy is disappointment here !! Sorry Ahmed ! You need skills here !! pic.twitter.com/mWIV1RBvzf

The awaam clearly wasn’t a fan:

People were being downright offensive:

People were also speculating that he’s being pulled back because of the backlash:

Can't say for sure but I think that host Ahmed Godil has been asked to not come on the stage again after relentless criticism on social media. No other explaination for his absence from the stage and the unexplainable gaps betweeen performances.

Disheartened by the memes and personal attacks, Ahmed Godil held a live session on Facebook where he shared how this was such a big milestone in his life:

Ahmed clarified how his intent was never that of mimicking Imran Khan but that’s just how he sounds naturally.

People were also accusing him of being high, because of his sunglasses:

For which Ahmed explained how his sunglasses were powered and how the laser lights used for effects were blinding him.

To which Ahmed replied that it was not on purpose, and he couldn’t help it.

He also encouraged people to send him constructive feedback rather than straight up try to end his career. Ahmed also revealed that someone had leaked his number and that he’s been receiving tons of calls and prank calls abusing him. He also took to Twitter to post what he felt:

Two thumbs up for all the people who are trolling me and trying to mock me just because of pure jealousy and can’t digest how someone can reach till here.
Thank you for all the love, hate, respect, direspect and support!!
In the end : Mehnat kar , hasadd na kar! ☺️ pic.twitter.com/hw2id7cfPr

We ain’t jealous of you you’re not fucking Tom Cruise you just ruined the whole ceremony you don’t even know how to host an event and don’t have experience as well then how the fuck did they allow you to ruin such a big event, don’t ever think to host next time https://t.co/XHXBGpMSge

Peopele were schooling him on how much PSL meant to them:

Bhaia g, ppl were waiting for this day since lony. And when u can’t fulfill their expectations, it means you are guilty. Also ppl are trolling u bcoz of your attitude of presenting. Plz improve and correct your attitude, so there will be no reason for them to troll. #PSLV https://t.co/gpdg6cAwJV

PSL Host: Do not mock me its bullying.
Also PSL Host: Who are you people? Jealous of me b/c you have done nothing with their life.

You wanna be a public figure, criticism is as much part of it as adulation. If you can't cope with it you shouldn't be hosting such events https://t.co/FJTjhSGwfR

The memes are unstoppable:

Some suggested that he joins classes:

People were just not having it:

Lol you are an entertainer , it’s you who should digest criticism when people don’t like what you have to offer. If hosting a cricket tournament is a metric of success for you then you really need to re-evaluate.
Next time, please talk like a decent human being and not a mawali https://t.co/Ac8kFlg7Fw

Though I hate comparison & I don’t want to compare one to other one but this kind of tweets & post shows how Professional & Creative u r😊@thePSLt20 I don’t know what sort of criteria you guys wants in #PSL host. Please allow me to mention some good VJ’s name who are master(1/1) https://t.co/xLP126IM9w

Some thought Nasir Khan Jan would have opened better than him:

Nasir khan jan wouldve opened it better than you did. https://t.co/1NymuGOAHZ

Some thought he was overacting:

Lol you are an entertainer , it’s you who should digest criticism when people don’t like what you have to offer. If hosting a cricket tournament is a metric of success for you then you really need to re-evaluate.
Next time, please talk like a decent human being and not a mawali https://t.co/Ac8kFlg7Fw

And while people are still bullying him, tons of people have been many standing up for him:

Ahmed Godil, who hosted PSL's opening ceremony and received a lot of flak, is the latest victim of social media bullying and doxing. He may not have met your expectations as a host and you are entitled to expressing your views but why so much hate? #AhmedGodil #PSLV https://t.co/Mqry2JWz1j

I know about Ahmed Godil from my time back in Karachi, org events. The guy was there performing in front of 35k live audience and millions of viewers across the world. If you are trolling him for his accent or hairstyle or whatever he did to invoke the artist in u 1/2

Try standing in front of 35 people and introduce yourself.

Many thought the nation fuels on jealousy and trolling:

Ahmed Godil spoke on Samaa TV. You all mocked a budding host.
Criticism and Banter has limits too. You don't stoop low or get personal.

People were feeling sorry for him:

For us Pakistanis , everything is fun and games. Literally everything. I repeat ‘EVERYTHING’.#AhmedGodil

Some thought it was the other technicalities that should be blamed:

The host is Ahmed Godil Idk how are you guys not aware of him, he has been hosting events for a long time.

Like I have seen him hosting many events that I have been to.

Many were schooling others to respect their artists:

#AhmedGodil
Sadly, we go beyond the joke to the extent that they also tear down the sanctity of the sheet and the four walls … Respect your artists and your people …
Plz Say #SorryAhmadGodil . for yesterday Troll
@VGGodil pic.twitter.com/p4gK8qLFNO

People were invading his personal space:

Many found him to be a good host:

He was very good and i must say that we Pakistanis should overlook every negative thing because International Cricket is back after alot of hardwork and sacrifices. Lets make it beautiful. #AhmedGodil

People were feeling sorry for what they had said earlier:

Hosting the Pakistan Super League is not an easy feat, let’s try and support the rising talent! What do you think?

5 Models Who Rule the Runway and 5 Who Make Editorials Rock!

This girl thinks smoking makes you 'modern' and the twitterati are debating!