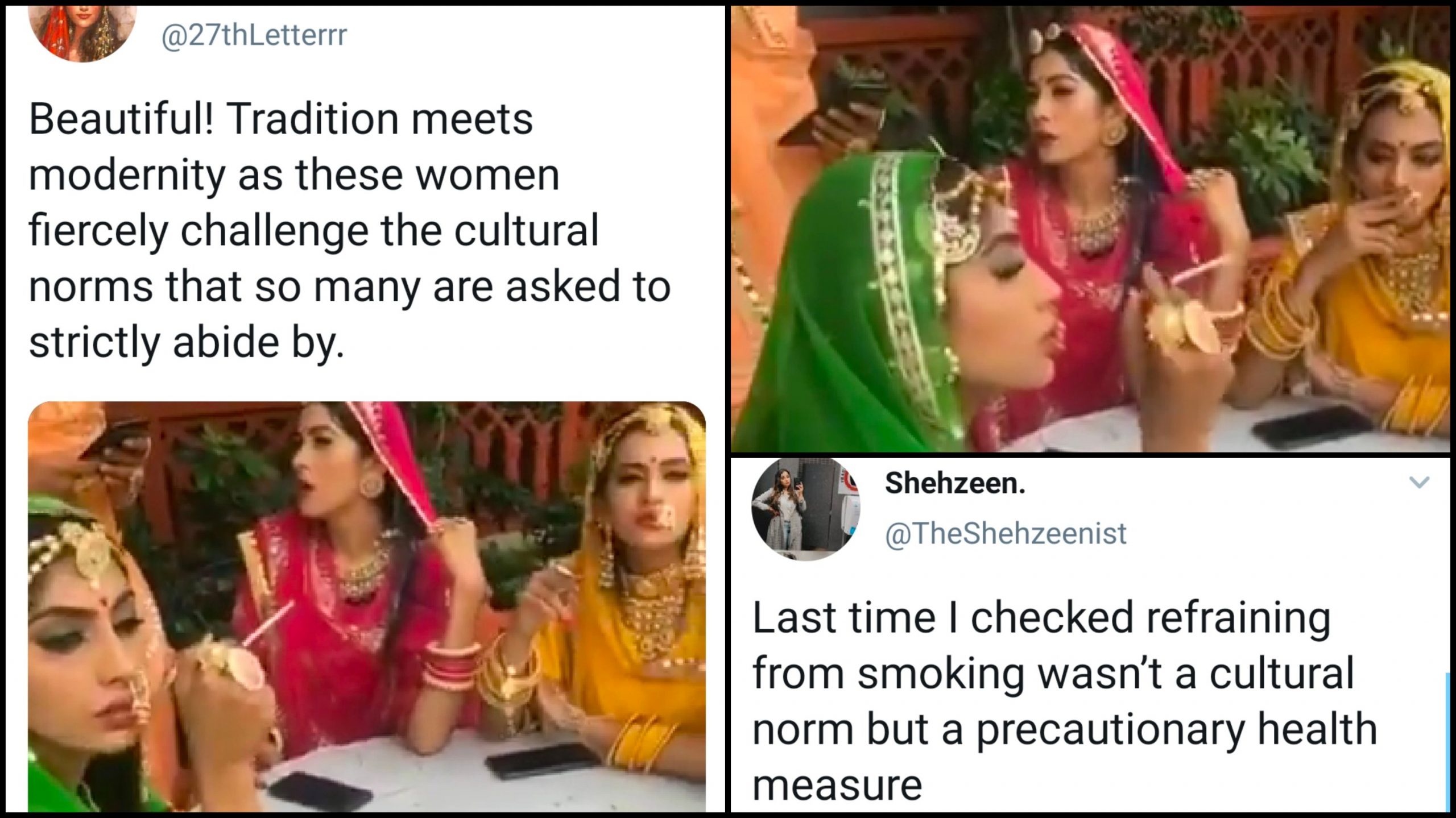 Everyday the twitterati finds something new to debate about, and today they’re debating if smoking makes you modern. A girl on Twitter shared a video that she finds beautiful, where young women dressed in traditional attire can be seen smoking cigarettes:

Beautiful! Tradition meets modernity as these women fiercely challenge the cultural norms that so many are asked to strictly abide by. pic.twitter.com/cCISntSC9W

According to her it’s the perfect amalgamation of tradition meets modern, and a norm that she thinks women are challenging but the internet thinks it has nothing to do with either one:

What's modernity in this picture? I only see a bunch of good looking and well dressed women involved in a very unhealthy activity.

Some thought they were models and the video was promoting unhealthy diet culture:

They look like models. They smoke to control their appetite. Nothing modern or beautiful about it.

Some came straight to the point:

Cigarettes were commercially produced first in the 1800s. Smoking isn’t modernization, it’s stupidity. For both men and women. https://t.co/yJSX5kaz8F

Some schooled her on how this has been a normal occurrence in rural areas:

Err have you been to rural areas in Punjab? Women smoking is not modern. Rural women already smoke cigs & hukkahs like a pro https://t.co/oJdlMNVAuY

Many wanted her to stop glorifying smoking:

STOP GLORIFYING AN UNHEALTHY BAD HABIT THAT ALSO POLLUTES THE AIR IN WHICH WE ALL HAVE TO BREATHE!!!!!!!!

Modern? I see traditionally dressed young women glorifying an unhealthy and dangerous activity! There's nothing 'modern' in this photo 🤐

Smoking has nothing to do with modernity or freedom.

Smoking is an addiction with negative benefits to health and environment.

People were concerned about the organ damage:

Good for them but ruining your organ has nothing to do with modernity.. https://t.co/l61eSO0rgC

Some were calling it an advertisement for cancer:

If cancer had an advertisement. https://t.co/wd0zciQMlq

Some thought it was a twisted interpretation of modern:

i just see an unhealthy habit/addiction that's been around equally for men & women for quite a while now🙄🤷🏻‍♀️twisted, inaccurate interpretation of modernity🚫⚠️ https://t.co/44OXZeo11r

my wife asks me how do I have whiter teeth than her, I just said I never had any kind of madha in my life

Smoking is as injurious to men as it is to women:

it's 2020 and people still think smoking is cool and modern? newsflash! it's extremely extremely extremely unhealthy for both men and women. no one is stopping anybody from smoking but you're an asswit if u encourage something as disastrous as smoking https://t.co/ndNsb8pNJs

Some were straight up savage:

People were sharing their personal experiences:

The dresses are beautiful..however, theres nothing cool or ‘modern’ about smoking..its an unhealthy & a filthy habit..I’ve been smoking for almost 30 yrs & it has caused me nothing but pain..I wish I had never started & had the will power to quit..please don’t promote it..thanks https://t.co/I0UMLValQ3

For many it was a disgusting habit regardless the gender:

Why does smoking always having to come in when we talk about challenging cultural norms!? ITS A DISGUSTING HABIT NO GENDER SHOULD HAVE!
There is nothing modern or beautiful about this. Wish these women were riding bikes on the road instead. https://t.co/B2Lao2m9U7

Many made the point how smoking should never be used as a symbol of empowerment:

Please never use smoking as a symbol of feminism or empowerment https://t.co/nzzT2tDepn

All our dadis were fiends what are you on https://t.co/AXzSKcZ28L

tradition meets lung cancer smh if u wanted modernity at least use a vape LOL https://t.co/t506lGnqoM

Some thought there were more important things that needed to be tackled:

I think there’s more important cultural norms to tackle than smoking cigarettes but y’all do whatever for the photo shoot https://t.co/WKgtku3YCK

me in exam hall trying hard to remember the answer

Some understood the place she was coming from but did not find anything positive:

Some liked the fusion:

Smoking is a personal choice…nothing to do with norm or culture..but i like the fusion🙃

Some were trying to make a point:

If men can smoke why cant women ?
Though smoking is injurious to health.

Some were calling out on the hypocrisy shown by men:

It was a whole mood for some:

What do you think about this video? Let us know in the comments below!

Sick of bullying, the PSL host Ahmed Godil speaks up against the trolls!

Shamaeel Ansari - The Last of Her Kind