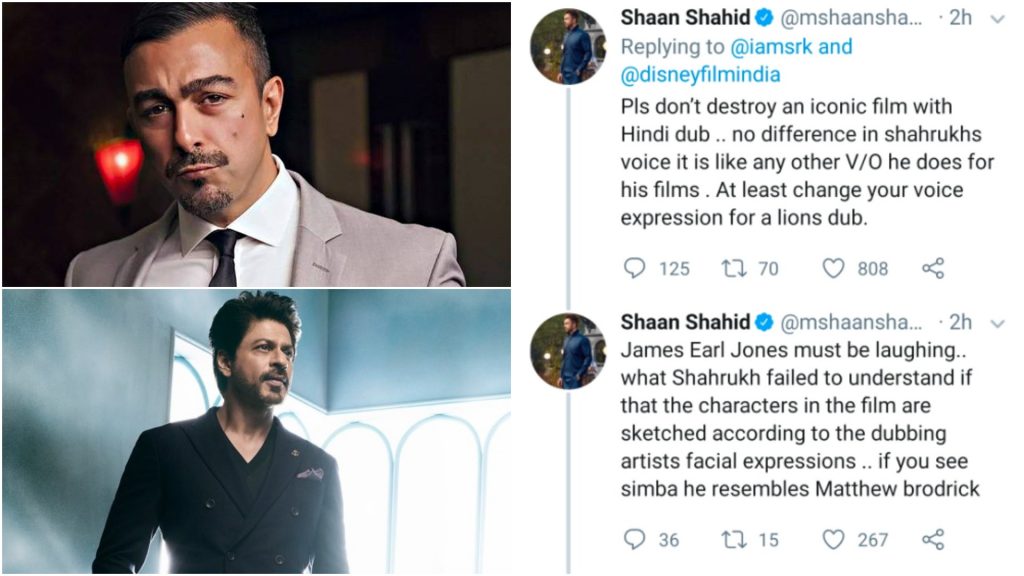 As Lion King moves closer to its worldwide release, Shahrukh Khan, who has been busy dubbing the Hindi version of Lion King, shared a glimpse of the Hindi dubbed trailer:

As soon as the trailer was shared, there was tons of feedback from his fans. That’s when Shaan Shahid stepped in to request Shahrukh Khan to not ‘destroy’ a movie so iconic with a flat dub:

Pls don’t destroy an iconic film with Hindi dub .. no difference in shahrukhs voice it is like any other V/O he does for his films . At least change your voice expression for a lions dub.

He then continued to say that characters are sketched resembling the dubbing artists and their expressions. Shaan felt that there was a lack of expressions:

James Earl Jones must be laughing.. what Shahrukh failed to understand if that the characters in the film are sketched according to the dubbing artists facial expressions .. if you see simba he resembles Matthew brodrick

Simba’s voice in the clip belongs to Shahrukh’s son, Aryan Khan and sounds almost identical to that of Shahrukh’s. Shahrukh has lent his voice for Mufasa.

Glad to be a part of this journey… a timeless film. Voicing it in Hindi with my own Simba. The last time we did a film was around 15 years ago and it was ‘Incredible’ and this time around its even more fun. Hope everyone enjoys it 19th July onwards. #TheLionKing @disneyfilmsindia

The trolls came to bash Shaan almost immediately, but Shaan gave them all befitting replies:

Mahesh bhatt would also be crying when you made arth 2

It was not a Hollywood production ..

This girl didn’t quite get the gist of what Shaan was trying to say:

"Voice expression for a lion['s]".
So you expect SRK, or anyone dubbing for this movie for that matter, to roar?
Like, really just roar and not say a word? 😆😆
You've got talent, man.

But Shaan explained, a little:

Watch the real one .. to understand .. but you won’t understand it’s ok

Some thought there were more pressing issues to cater to:

Its his son which you can hear in the trailer. Lion King is being dubbed in all major Languages for maximum reach. Chill out shaan, their are more important things to worry about. Like the blatant harassment and misogyny in our entertainment industry

Many thought he should watch the English version if he has a problem:

if you have so much problem with this version, why don't you watch it in English

Sir firstly it's not SRK's voice 🤦🏻‍♂️ and secondly.. no one is forcing you to watch it in hindi version 😑

Please go n watch the movie in English instead of blabbering incoherent stuff here. Firstly this is NOT ShahRukh's trailer and the other thing is Hindi trailer is meant for Indian audience and we are very much happy with SRK as Mufasa and Aryan as Simba!

this isnt his voice, and he isnt in charge of Disney, but please carry on with your pointless tweets.

But he thought otherwise:

Some asked him not to criticise others:

Come on mr shan I respect u as u r our biggest star. U r the star of pakistan . But plz don't criticize other's work. They are doing a brilliant job. And u should concern on your films. U have also given pathetic films like opertion 021 yalqaar arth 2.

Some thought he was jealous:

Are you jealous of @iamsrk ?

And while many trolled him, there were a ton of people who agreed with him:

Shaan you are absolutely right..!There was no point to dub an excellent movie in Hindi language.Sadly, they are just ruining our childhood memories -______-

Amitabh Bachchan would’ve been the ideal choice for Mufasa

Sorry sir they already destroyed it

Some thought he was asking for too much:

You are asking too much from this self claimed king, a highly overrated

What do you think about Shaan’s comment? Let us know in the comments below!

Pakistan’s top couturiers reveal how you can be the perfect summer bride!

Mani shades Momina Mustehsan for her performance at the LSA and we're confused!