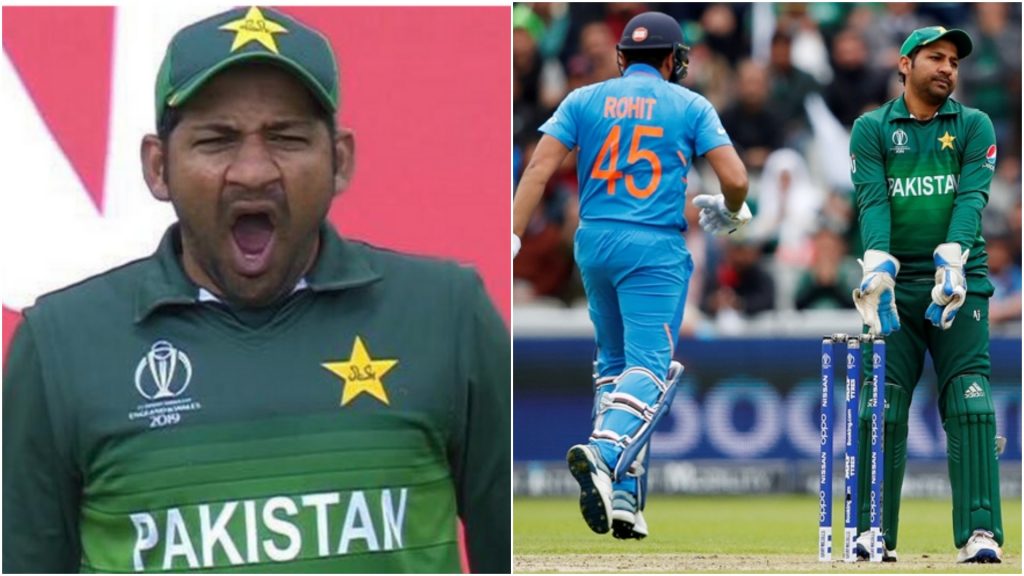 After one of the most disappointing matches in this year’s World Cup, Pakistan lost to India with 89 runs. And the nation has been questioning Sarfaraz’s captaincy and fitness since then.

Last time when Shoaib Akhtar tried questioning Sarfaraz’s fitness, his poor choice of words got him a ton of hate but his recent performance has raised a lot of questions. To add to the heat, the team was spotted eating carelessly prior to the match.

Pakistan team’s preparations for their biggest match are unmatchable. pic.twitter.com/5G3MIGd9Cg

A few members of the team were spotted smoking sheesha a the night before the big game:

Shoaib Malik out on zero. At 2am on Sunday, he was at the Winslow Road sheesha bar with his wife and mates. This was the kind of preparedness against India. Where’s the mighty ehsan mani and IK’s promise of taking pak cricket to new heights in Naya Pakistan pic.twitter.com/tW3ay3TaNV

If you think cricketers, who are supposed to be professional athletes and the outcome of the match literally depends on it, should not be bodyshamed for being freaking fat, then you are a raging idiot.

Calling out Sarfaraz and others for being fat is NOT fat shaming. They’re athletes and need to be fit.

Some said how this wasn’t fat but healthy in Pakistan 😂

Sarfaraz ain't fat. In Pakistan, we call this "healthy".

Shireen Mazari too commented on the poor performance of the team:

When the captain is yawning on the field & the fielding is non existent; & when sheesha smoking is indulged in hours before the match – what can one expect but humiliation. That the captain decided to let India bat first was simply the last straw! Or was that Malik's instant out?

People shared how misinformed Pakistani people were about diet

paki folks are so uninformative when it comes to diet. Multiple people telling me Sarfraz has to eat, he can eat whatever he wants. Yes, he has to eat but he has to choose his food carefully, bad food leads to poor fitness and poor fitness effects their game.

absolute levels to this game. pic.twitter.com/KIa7I4vSCB

Some said that Sarfaraz should have been in the Punjab police rather than the team:

People were upset that Sarfaraz couldn’t run as efficiently

Kohli running at over 25kph between the wickets.
Meanwhile Sarfaraz: pic.twitter.com/qjCT2MQ7iA

And again, people were furious over the unhealthy choices our players have been making:

Don't call me a traitor, but look at the Indian players, they look like proper athletes, our players look like they've eaten two plates of waris nihari with feeqay ki lassi and benazir kulfa, all at once.

Our players are nothing but a sack of unhealthy food, don't come up to me saying not to bodyshame, THEY ARE ATHLETES, THEY NEED TO BE FIT. If they can't control, just fucking leave. Idc if Sarfaraz is fat, I care if he's fat and still in the team. Unfit players need to fuck off.

Saw a Kohli interview where he told he hasnt had biryani in years, even though it is absolute favourite food, just because so much starch messes up with his fitness regime…

Meanwhile, Pakistanis are fighting over whether an 'elite' athlete should field with his tummy or not.

Some demanded that these cricketers retire asap:

Someone even put up the Pakistani team on OLX 😂

PAKISTAN MUST CHOOSE ITS PLAYERS ON THE BASIS OF MERIT.
Nah, we're all talented, but MERIT must be kept under consideration.
Hope we learn our lesson from this match#IndiaVsPakistan #ICCWorldCup2019#CWC19 @TheRealPCB

Someone even asked for an inquiry on the lack-lustre performance of the team:

A high powered inquiry should be ordered regarding the lack-lustre performance of the Pakistan cricket team. All the players looked as if they had been awakethewhole night ! Why was Sarfaraz yawning continuously? He is alsodisplaying a fat belly.He should be sacked from the team.

Meme games were on point though

health instructors
explaining to sarfaraz
why a monitored diet
is important for his
performance: sarfaraz: pic.twitter.com/TyLfDuLSXA

For the people who still believe that In 1992 the situations were same so we gonna win the world cup …..
Just Feel the difference between physique,body language, attitude and the class #سرفراز_کو_گھر_بھیجو pic.twitter.com/QGLMx6oGFm

Some people had their reservations…

Not being fit makes you tired faster and you underperform especially when you're up against players who put so much work in. They're paid to stay fit. It's the job they signed up for. This isn't body shaming

Weight fluctuations aren't an option since their diet is very carefully regualted by professionals. They were very irresponsible. As for mental health, you're allowed to opt out. People aren't pissed because they've gained weight, they're pissed b/c they're underperforming

Not everything can be swept under body shaming. They’re paid and expected to be fit enough to perform in a game that is rooted in physical fitness, amongst other factors.

And with a loss like that, we hope our cricketers learn the importance of sleep and fitness.

What are your thoughts on the team’s performance? Let us know in the comments below!

Khaadi adds yet another feather to its cap with 'Kanteen'

Model Mushk Kaleem lashes out on brands changing her complexion