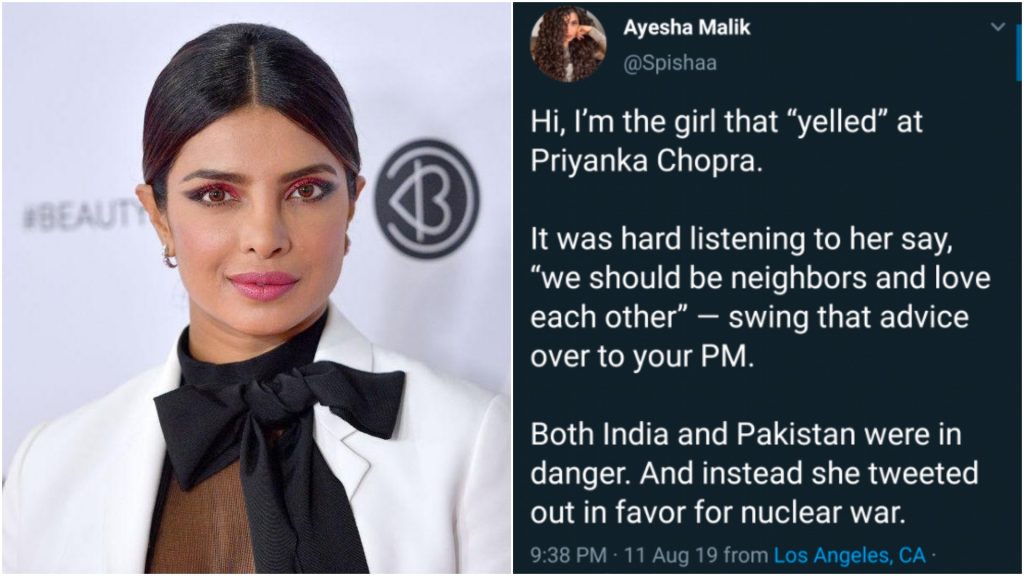 It seems as if things never calmed down after the Pulwama attacks. It was only then when the world saw their favorite B-town celebrities promoting nuclear war. One of those celebrities was Priyanka Chopra who, ironically, happens to be the peace ambassador of the United Nations.

In a beauty event in LA, a Pakistani girl named Ayesha Malik couldn’t resist but call out Priyanka Chopra on being a hypocrite:

Priyanka Chopra tweeted during a time when we were this 👌🏽 close to sending nukes to one another. Instead of advocating for peace she tweeted in support of the Indian army pic.twitter.com/LhbMkOW59v

To which Priyanka Chopra addressed in the most condescending tone:

“Whenever you’re don’t venting”. Sorry, didn’t realize that speaking on a humanitarian crisis was “venting” pic.twitter.com/OqCLgjDNa1

And the clip which has now gone viral has made the internet go nuts!

Priyanka Chopra seemed to be caught off guard, and her reply was incoherent and unintelligent. As if tho she was confused between sounding like a I-just-wanta-bringabout-world peace mindless bimbo pageant queen, or a condescending and patronising bitch.

Damnnnn Priyanka chopra undone by a Pakistani woman. I am here for this.

Some were absolutely furious and rightly so!

priyanka chopra is a dumb, self-exoticizing dickhead who gaslights people with legitimate questions regarding her support of a religious fundamentalist hate preacher and whose biggest claim to fame is marrying a washed up white boy — hope her downfall is swift and public. https://t.co/PVefzgn075

What a brave girl confronting @priyankachopra for war mongering. Look at her reply. ‘I have many Pakistani friends’ wow! That’s her response! She didn’t even let her ask the whole question. Well done @plathwoolf_ So proud of you! #PriyankaChopra #priyanka @UNICEF #UNICEF pic.twitter.com/MF1imgVIRf

Its horrifying that she actually patronized her later in her reply by saying "dont yell gurl, dont embarrass yourself."

The fact that youre an Ambassdor for the UN is bloody embarassing when you lack the basic empathy to understand she has every reason to be upset. https://t.co/ub1iEF8QvO

Middle Ground when thousands of innocent people ( including children ) are being butchered daily?! Yeah. No. Sorry, No middle grounds here Miss Goodwill ambassador. Being Patriotic is one thing but We’re humans first. Lets not forget that. #WakeUpUN_KashmirBleeding pic.twitter.com/S8lDCSmK6i

Where are Pakistan’s representatives to reply to this? Where is our love for the people who idolise and follow us? Will anyone respond clearly and categorically to this because she is a walking disgrace to the very word “humanitarian.” https://t.co/53dPawe6Jk

PC’s response in a nutshell:

Priyanka Chopra: war isn’t something I’m fond of but I’m patriotic so 🤷🏻‍♀️🤷🏻‍♀️🤷🏻‍♀️

Also Priyanka Chopra: wE aRe aLL hErE fOr Love. HeHe pEacE ✌🏻bE KiNd xoxo pic.twitter.com/5z7anilrwX

priyanka chopra be like BOMB PAKISTAN hehe peace and love 😘

Bitches be like “war is bad omg, love everyone and be kind!!!” all while supporting bigoted, genocidal politicians and by bitches I mean Priyanka Chopra

People were furious for using the ‘being friends’ excuse to promote genocide:

priyanka might be the first person ever to use the “i have a ____ friend” excuse to justify genocide.

Many were happy to see Priyanka be cancelled:

Some also pointed out how Priyanka didn’t utter a single word when the mic was literally being snatched from Ayesha:

Priyanka Chopra at BeautyCon: Women should empower one another #sisterhood

Also Priyanka: watches a girl's mic being snatched by security and does nothing, then proceeds to talk down to her in the most catty, condescending tone. pic.twitter.com/TwUPNMKgd5

And while Priyanka was justifying war mongering, we had our favorite diva Mehwish Hayat talk about Kashmir and how the image of Pakistan has been negatively portrayed by Bollywood films as she received Pride of Performance award in Oslo:

Bollywood could have used cinema to promote mutual understanding instead of vilifying us as they do. They need to decide which is more important – nationalistic fervour or a peaceful future . pic.twitter.com/EzcK4L0zWD

And with that being said, we’d only like to say that in a world full of Priyanka Chopras, be like Mehwish Hayat!

Cheekh’s ending wins hearts all over the Internet