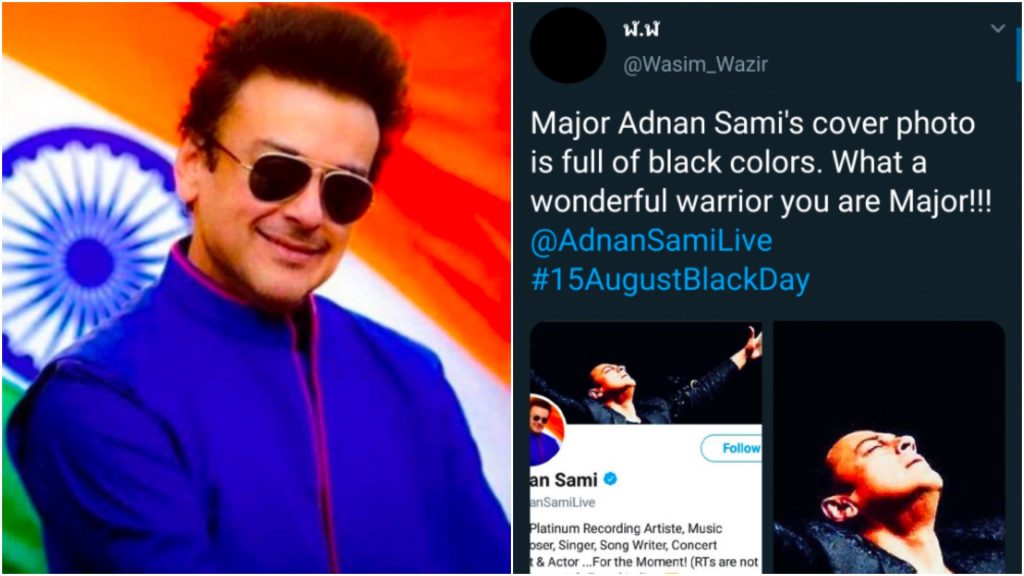 Singer Adnan Sami, who gave up his Pakistani nationality to obtain an Indian one has been the butt of Major Adnan Sami jokes for quite a while now. Every time there’s a new political development, people start lauding Adnan Sami. And today as most Muslims are observing a ‘black day,’ to stand in solidarity with Kashmir, people have turned to trolling Adnan Sami as usual:

People picked out on subtle hints 👀

Major Adnan Sami's cover photo is full of black colors. What a wonderful warrior you are Major!!! @AdnanSamiLive#15AugustBlackDay pic.twitter.com/0rNzixi8Zl

Thanks Major Adnan Sami for observing Black Day today with us by wearing black goggles. 😎🤭 Got your secret message😎#15AugustBlackDay pic.twitter.com/APnvcXfdpU

Some wanted him to surprise India:

Some deciphered his message and forwarded it to concerned authorities 😂

Roger that Major. Thank you for the update. It has been forwarded to the concerned authorities. Your hard will always be remembered. Pakistan Zindabad 🇵🇰 #15AugustBlackDay#AdnanSami#ThankYouMajor https://t.co/pyZaFjGIAM

Many tried exposing him, but the haters thought it was photo shopped:

This was the real DP of Major Adnan Sami but for the sake of his duty he changed Pakistani flag with Indian flag. We are proud of your intelligence Major!❤#15AugustBlackDay pic.twitter.com/YhGOBc8VTS

Some came at him with straight up facts but thank god the Indians didn’t buy it, phew!

These exposing games need to stop!

i think after all this hardwork and his countless services of #major #adnansami .his rank should be promoted @AdnanSamiLive

Some reminded him to stay undercover:

Some were feeling bad for him:

Funniest part of Pak-India tension is that everytime its Adnan Sami who has to repeatedly prove his loyalty with India.
He knows very well that RSS goons are closely reading his words. A single hint of doubt and he'll be taken out like a stray dog he already is.@fourvoyagers

Even Aamir Liaquat played along:

Some thought he shouldn’t be given any importance:

Dont know why adnan sami trnd….. why we give him that importnc he is a 3rd clas guy #adnansami

What do you think about Major Adnan Sami and his services to Pakistan? Let us know in the comments below!

Maya Ali is the new style diva - and we have proof