With the Lux Style Awards scheduled for 7th July, the time is inching near for the celebs to walk the glorious red carpet and take the coveted and well-deserved award home. However, before they do that, we’re here to predict who might be the ones taking that journey to victory.

We predicted the fashion and film awards, and now, of course, it’s time for the most loved category of them all –  the TV nominations!

It’s clearly not the easiest task at hand, as 2018 was a stellar year for television with plays like Khaani breaking almost all of the previously set TRP records, whilst other shows like Dil Mom Ka Diya and Balaa brought us some new and exciting narratives to follow.

It’s definitely anyone’s game, but here are who Diva Online thinks will and should win the TV awards this year… 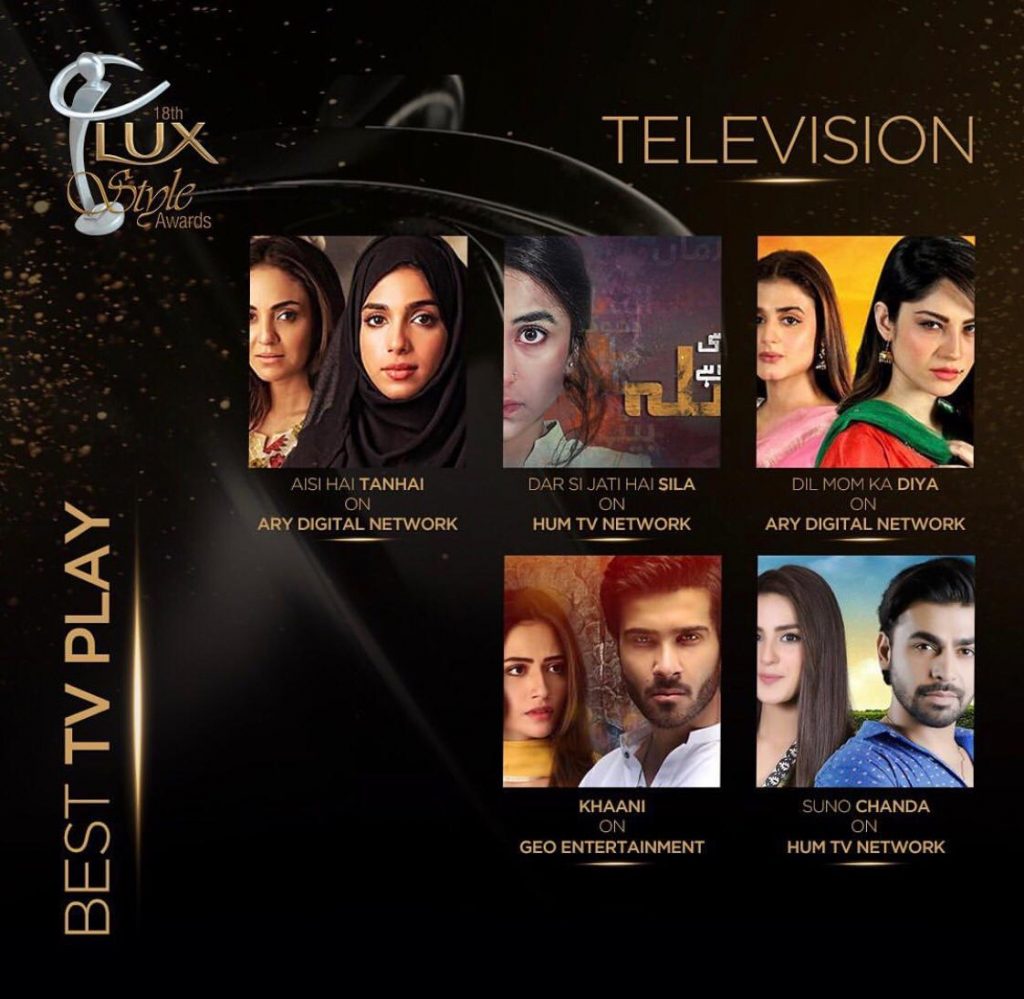 The TV plays nominated this year have all managed to win hearts for either the strong stories they showed or the connection they created with the viewers. There’s Aisi Hai Tanhai, where real-life consequences of our lives on social media were discussed, Dar Si Jati Hai Sila, where sexual abuse became a much-needed narrative, Dil Mom Ka Diya, where family lives were explored, Khaani, which was a troubled love story of epic proportions, and Suno Chanda, which made everyone’s post-Iftaar super entertaining.

Who is it gonna be?

Will Win and Should Win: Khaani 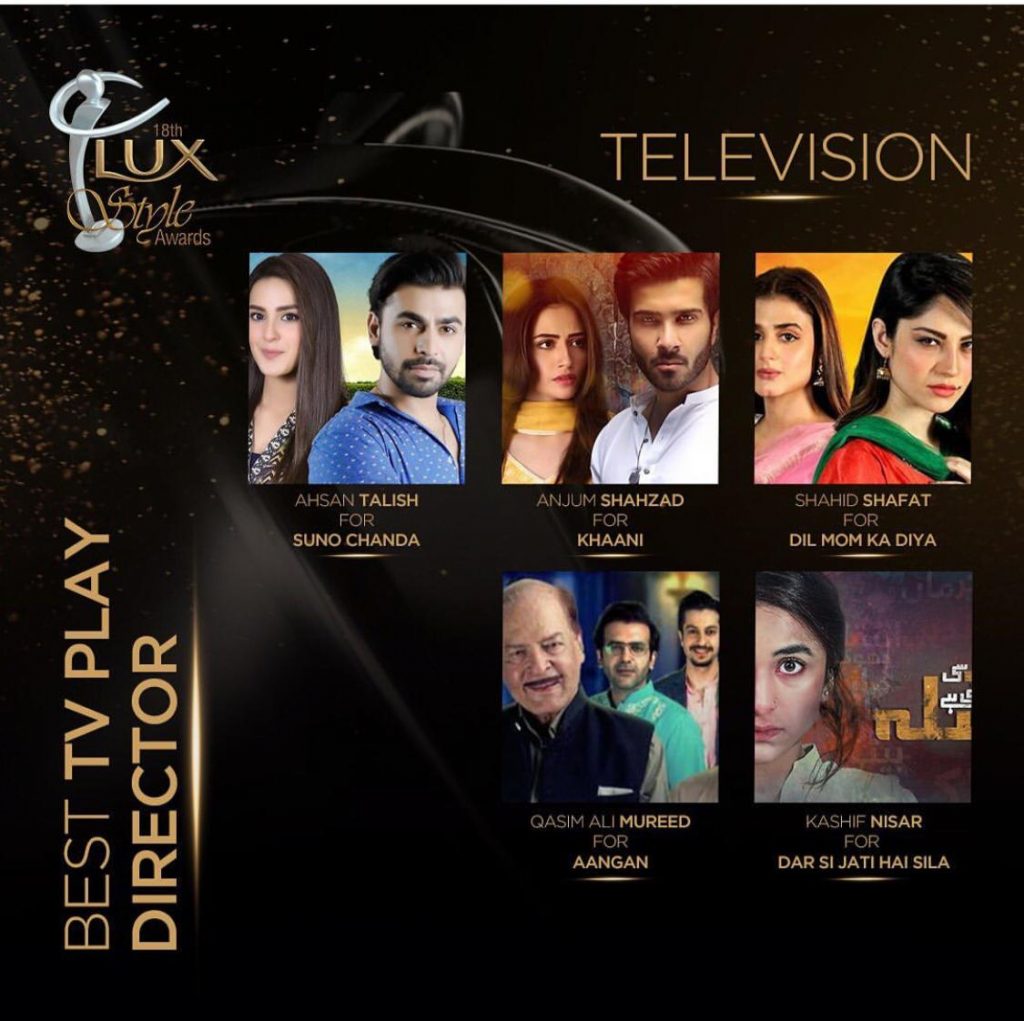 This category at the Lux Style Awards by far has some of the most prominent names of TV directors from last year and thus make for a difficult prediction. There’s Ahsan Talish for Suno Chanda, who managed to bring an entertaining narrative in our Ramadan shows, Anjum Shahzad for Khaani, which was big enough to make and break records on TV, Kashif Nisar for Dar Si Jati Hai Sila that did justice to a sensitive topic,  Qasim Ali Murid for Aangan that showed the story of a joint family, and Shahid Shafat for Dil Mom Ka Diya, who made dramas about familial problems interesting to see once again.

It’s a toughie, but here’s what we think

Will win: Anjum Shahzad for Khaani 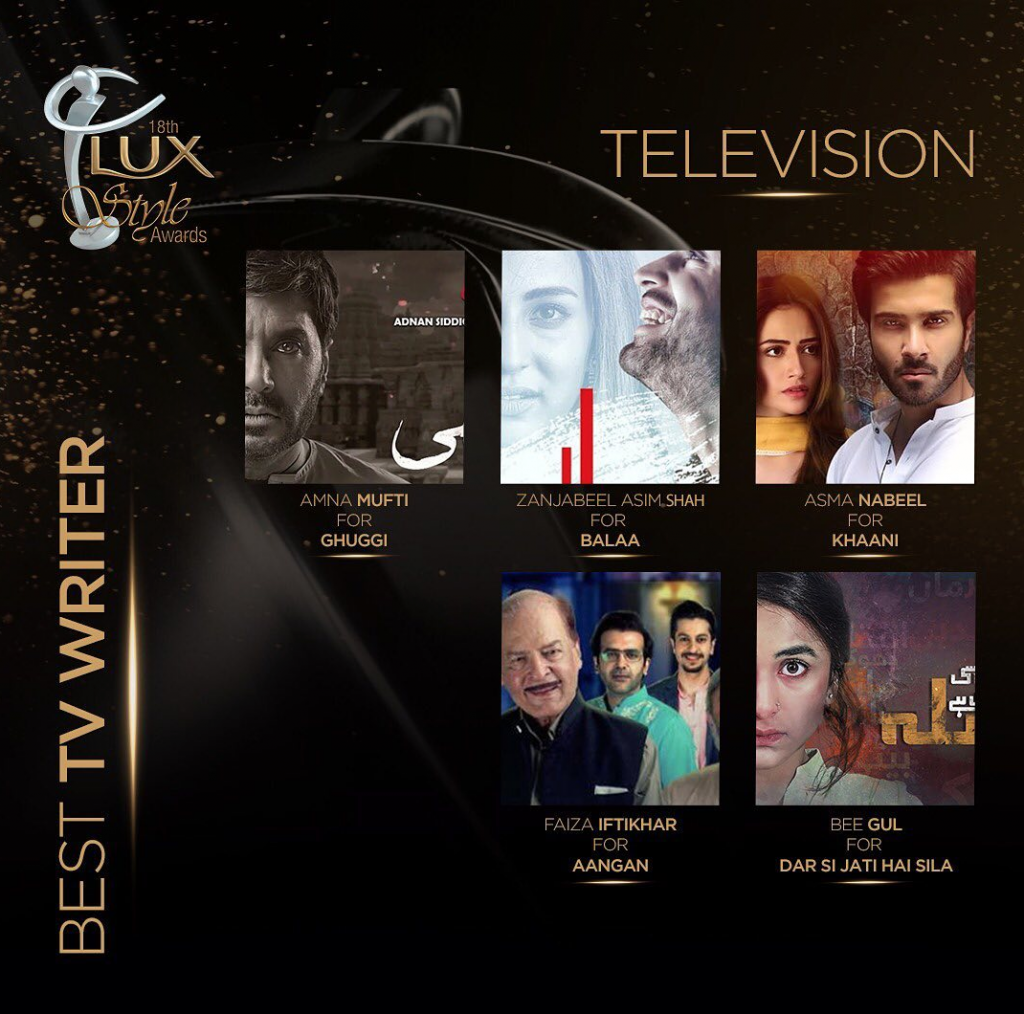 The power of writing for TV has made the names nominated in this award some of the most prominent faces behind the camera and that’s a true testament to the grown of the television industry today. There’s Amna Mufti for Ghuggi, who did a great job in making her characters multi-layered, Asma Nabeel for Khaani, who was able to break stereotypical bounds, Bee Gul for Dar Si Jati Hai Sila, who has so powerfully raised awareness on stories of abuse, Faiza Iftikhar for Aangan, who breathed life into stories of joint families and the issues that bring up, and Zanjabeel Asim Shah for Balaa, who made us realise of the monsters in our own homes.

Who wins this one?

Will win: Asma Nabeel for Khaani 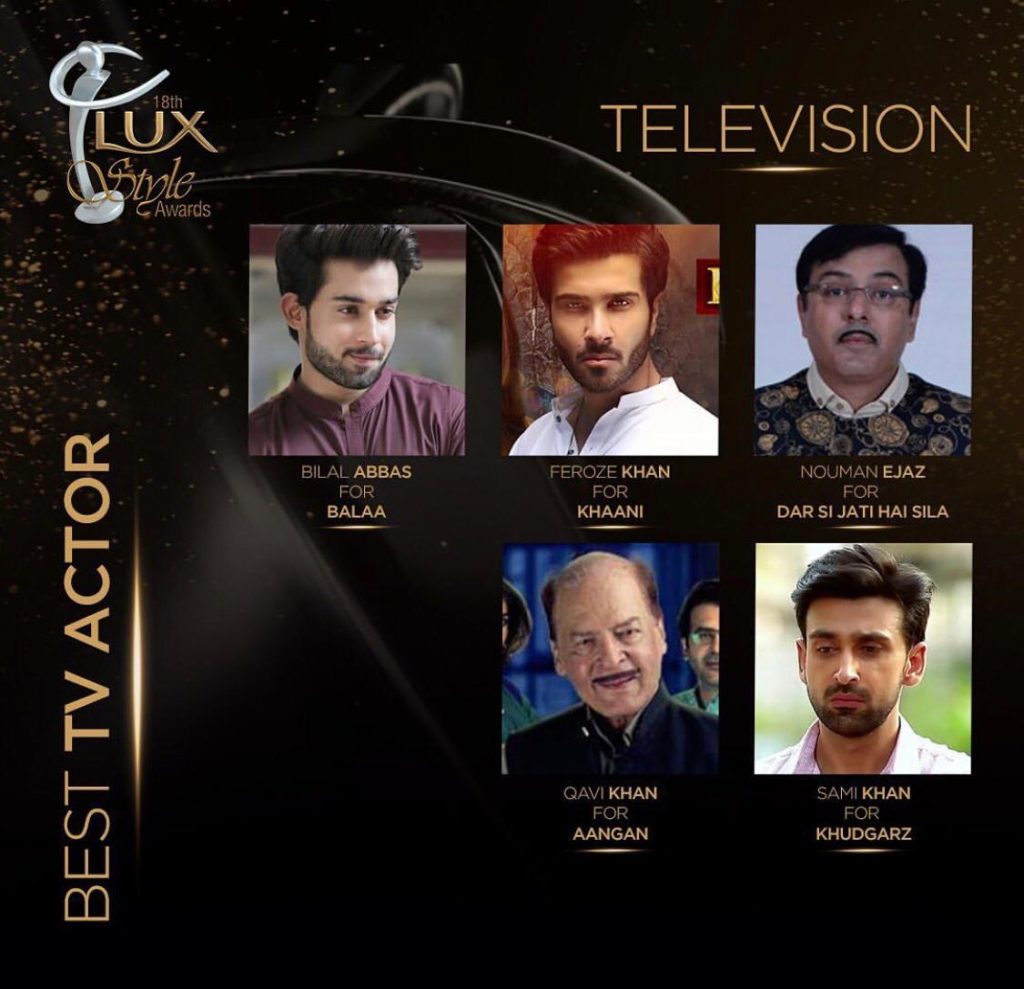 This category at the Lux Style Awards brings forth the names of those TV actors who managed to not only make fans go ga-ga over their acting skills on the small screen but also proved that they could justice to their roles. There’s Bilal Abbas Khan for Balaa, where his role as the homely Taimur brought him to the limelight, Feroze Khan who stole the show with his acting skills, Nauman Ejaz, who gave us shudders with his role as a sexual abuser, Qavi Khan, who ruled his scenes in Aangan, and Sami Khan, where he made an intense love story look great.

Who deserves this one? 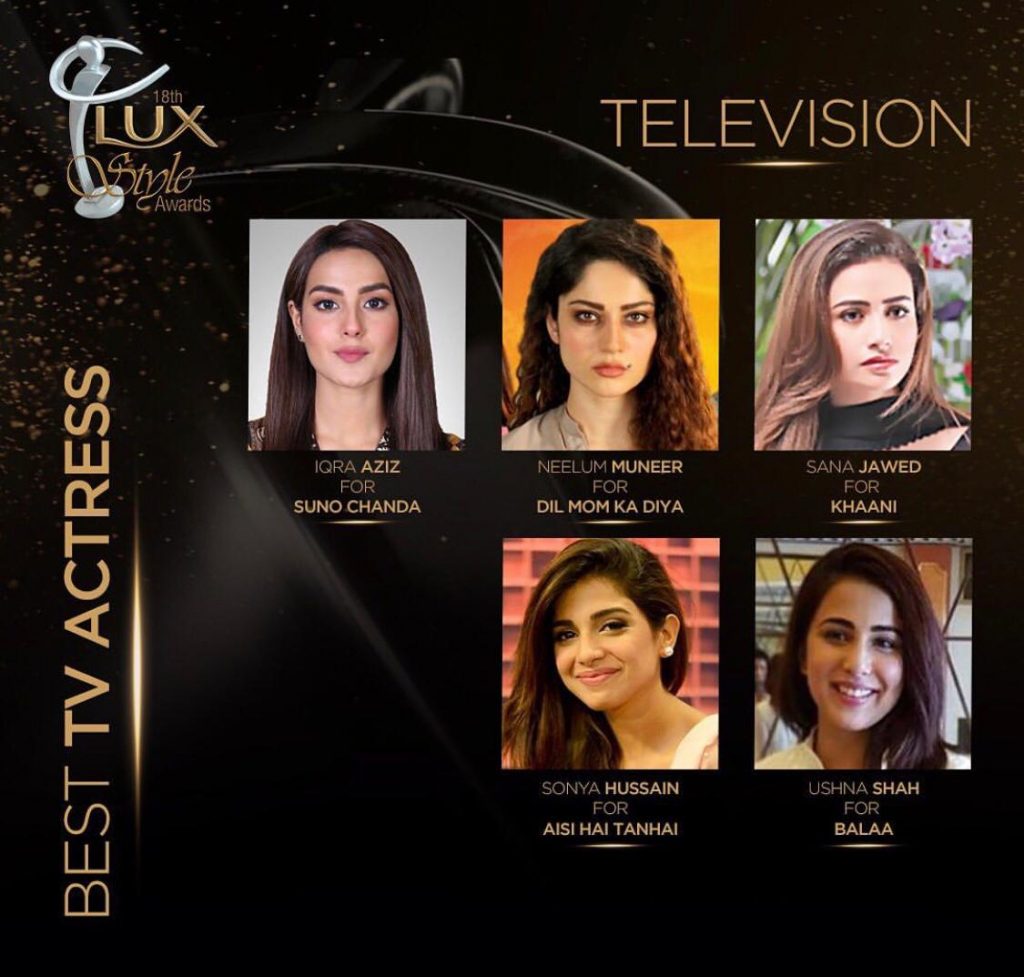 2018 was clearly the year of glory for the actresses nominated and their popularity since has proven that. There’s Iqra Aziz, who made it to the A-listers after Suno Chanda, there’s Neelam Muneer, whose role as the villainous Ulfat made her a fav-favourite, Sana Javed whose role as the eponymous Khaani proved her acting prowess, Sonya Hussyn, who looked perfect as the demure Pakeeza, and Ushna Shah, who proved she’s the real Balaa of great acting.

Who takes this one home?

Also read: Celebrities speak out against the nomination withdrawals from the LSAs 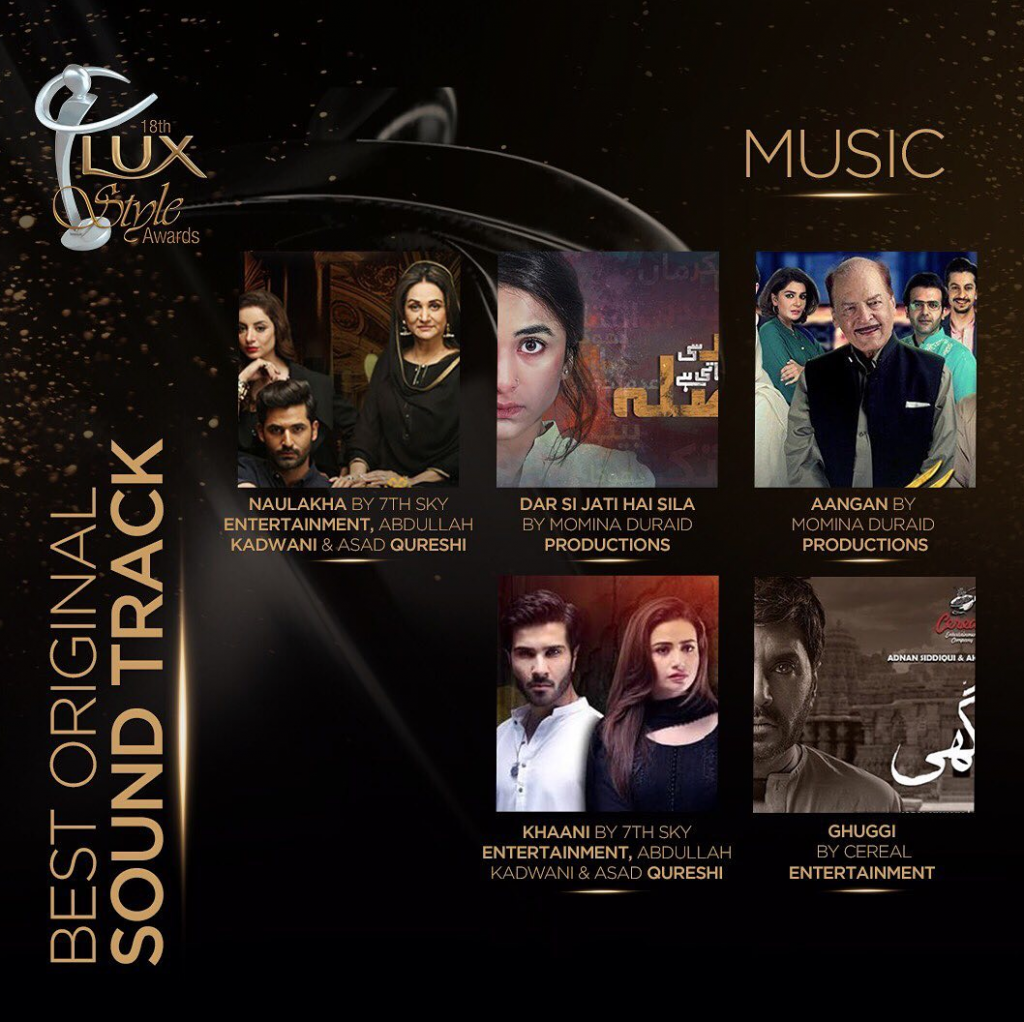 TV OSTs are something fans crave and they make for great tracks otherwise too! So naturally, the names nominated in the list are those who have proven to be tracks that fans have loved oh-so-much. There’s Aangan by Farhan Saeed, who always does justice to his music, Dar Si Jati Hai Sila by Yasira Habeeb, who is always melodious, Ghuggi by Bina Khan, who did justice to his number, Khaani by maestro Rahat Fateh Ali Khan, who does wonders with whatever he sings, and Naulakha by Saif Samjo, who has brought his aesthetics to this OST.

Who wins this one?

Will and Should Win: Khaani by Rahat Fateh Ali Khan 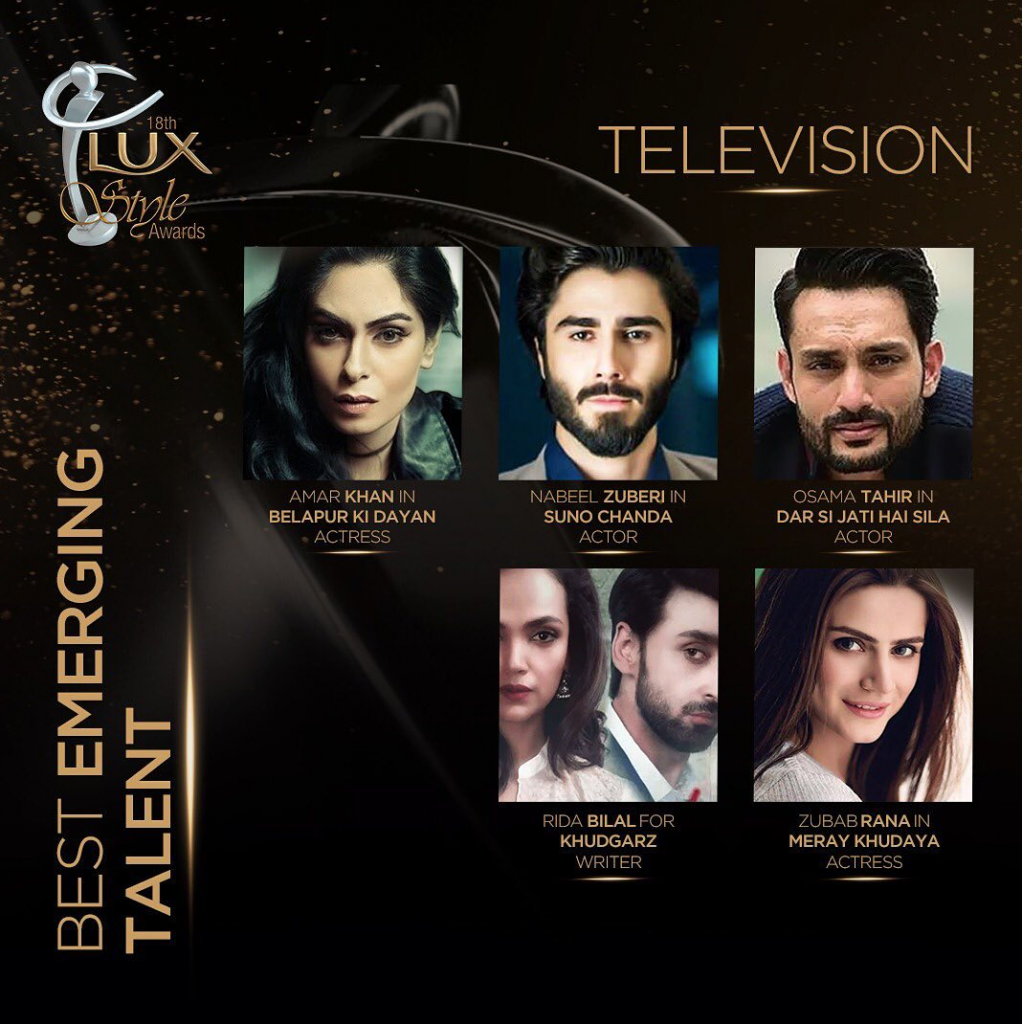 This category honours those budding stars who not only did justice to their roles but also put forward skills that can be honed further. There’s Amar Khan, whose role in Ghuggi was truly applause-worthy, Nabeel Zuberi, who forayed into television from modelling and won hearts in Suno Chanda, Osama Tahir, who isn’t relatively new, but has now gained prominence after Dar Si Jati Hai Sila, Rida Bilal whose writing made Khudgarz worth watching, and Zubab Rana whose role as Alina proved her excellence in acting.

Do you agree with our predictions for Lux Style Awards 2019? Tell us in the comment section below.

Excitement at its peak as Paksitan prepares to play with India tomorrow!