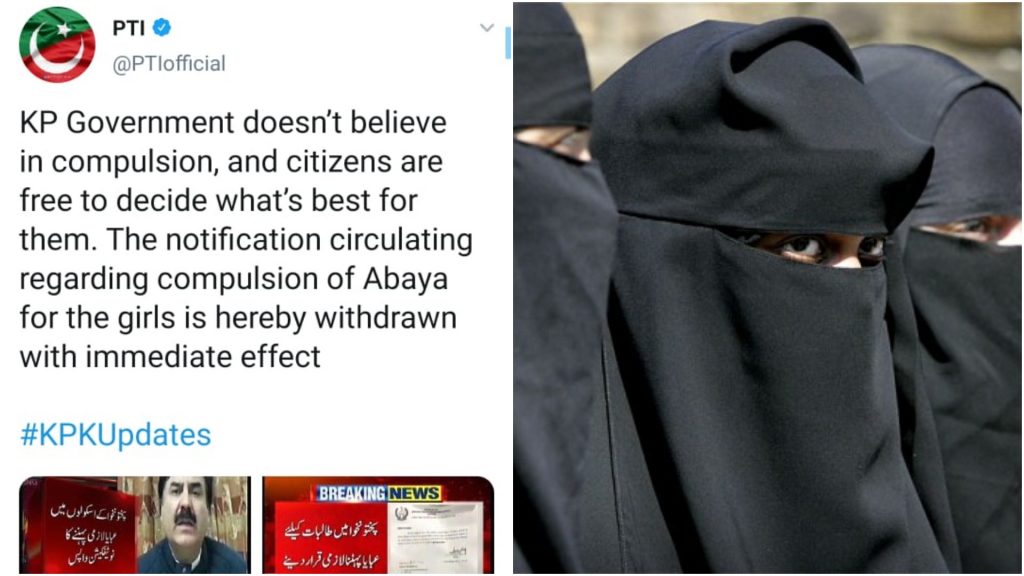 A notification was passed by the KPK government making it mandatory for school girls to cover themselves properly with an abaya to avoid any unethical incidents. 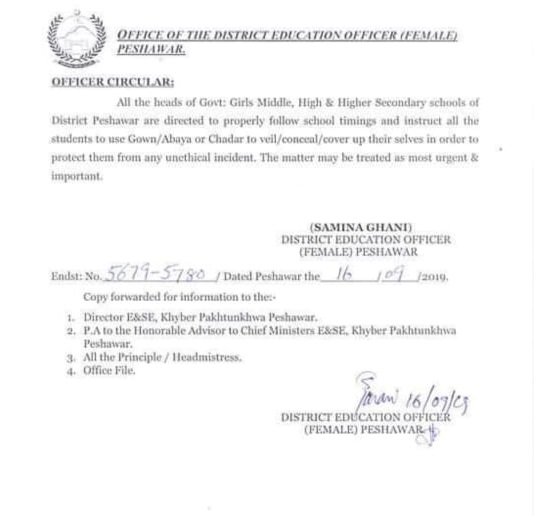 But it received a lot of backlash from people:

Abaya made mandatory in #Peshawar girls schools. Instead of going after harassers & penalizing them, #KP govt is repressing victims. Abaya is not part of school uniform & govt has no business regulating students life outside schools. pic.twitter.com/A1uHxodBn4

People found it to be extremely bizarre:

Beyond bizarre. Ridiculous notification by Pakistan Govt in Peshawar asking school going girls to wear Veil/Gown/Abaya and cover up selves in order to protect them from any ‘unethical incident’. Change mindset of the society and those in power, not innocent school going girls. pic.twitter.com/mGFZMB0TWE

Nadia Jamil shared how it’s the mindset that needs to change:

Singer Shehzad Roy too came forward and addressed how the men need to change:

Girl students wear dupatta, carry heavy bags, can’t play proper sports because what they wear. Now Government want these girls to wear Abaya and chador so they are not harassed. Change conditions and stop changing these girls https://t.co/KAJGt8iLBX pic.twitter.com/luTNctc51E

People came forward and shared how men still hoot at women regardless of what they’re wearing:

Some called it a publicity stunt as most of the women in KPK wear abaya:

Its is a cheap publicity stunt,
The notification is issued for Peshawar city,where 99.99 % females cover them selves either with chadar or abaya or veil,
ensuring punctuality order has been spiced to cover up order😐 pic.twitter.com/5i1TPAfmgc

Some came forward to defend why such notification was issued in the first place:

Parents refused to send their daughters to schools without parda in maximum districts of KPK, it was revealed upon investigation into the causes why girls education is not prioritizing. This was the sole reason behind this decision

A lot of people argued that dressing was a personal choice:

Today I am shaken by PTI Policy. Dress is personal issue. How can Gov Control. Looking at this News many Karachites will think twice in next Elections. 👇 https://t.co/BpfgfJ9YBn

People spoke out against enforcing girls to wear abaya:

1. Enforcing #Abaya or #Burqa on anyone is wrong.
2. Schools have authority inside the school. How can they force the girls to wear something on the way to the school where harassment happens?#Pakistan #Peshawar https://t.co/9tUM008725

Many suggested that the detractors be punushed rather than enforcing abayas:

Forcing young girls to wear abaya goes against fundamental rights in our Constitution; is contrary to research that shows young boys are as vulnerable to sexual violence as young girls – dress is irrelevant; and detracts from Govt’s duty to protect children, punish detractors pic.twitter.com/QGzM2ZUqxD

Many criticized how instead of focusing on the quality of education, the government was mire worried about the dress code:

You do not even bother improving the quality of education or tapping the low education rate yet you have to focus on what children wear while going to school?#DEOEducation #Haripur #Peshawar

Many were furious about the government ignoring the real issue:

Some believed it was a violation of basic human rights:

Forcing schoolgirls to wear religious clothing isn't a violation of human rights, is it? And no one would even have even thought of the religious minorities in this Peshawar school. Why should they wear Islamic religious clothing? https://t.co/wiL316U0gH

The gov has no right to interfere with how women dress. One would hope providing protection entails keeping law and order not putting a burka on little girls and young women @ImranKhanPTI

This is directed to Girl schools. In all-girl schools what ‘unethical incidents’ are they worried about? If the male staff is so untrustworthy then I suggest the students be instructed to bring pepper spray instead of chadars. #ProtectOurGirls pic.twitter.com/N96rQ8Q3fn

Rather Then Abayas Girls Should Be Allowed Batons Pepper Sprays And Stun Guns 🙂
Make Harassers Be Afraid For Once.

Fawad Chaudry too came forward to say that people were free to choose between wearing an abaya and not wearing one:

And while many were opposing the notification, there were people who were supporting this notification and wanted it to be implemented all over the country:

Why only in Peshawar, it should be imposed in whole country forcefully under the Islamic Sharia. Good step taken by @PTIofficial #Abaya #KPK #PakistanZindabad

After a ton of criticism the government decided to withdraw the notification, claiming that it doesn’t believe in compulsion:

KP Government doesn’t believe in compulsion, and citizens are free to decide what’s best for them. The notification circulating regarding compulsion of Abaya for the girls is hereby withdrawn with immediate effect#KPKUpdates pic.twitter.com/1LhhwEX33V

And the decision was lauded by many:

Sir @SAYousafzaiPTI I am glad that sense prevailed.This is the beauty of democracy”Laa ikraa ha fid din”din mein koi jabbar nahin.This is also a principle of Islam. Woman must b allowed to do Parda or Abaya if she wants,but similarly those who don’t want to should b free to do so https://t.co/UybuHc5ohy

What do you think of this notification? Let us know in the comments below!