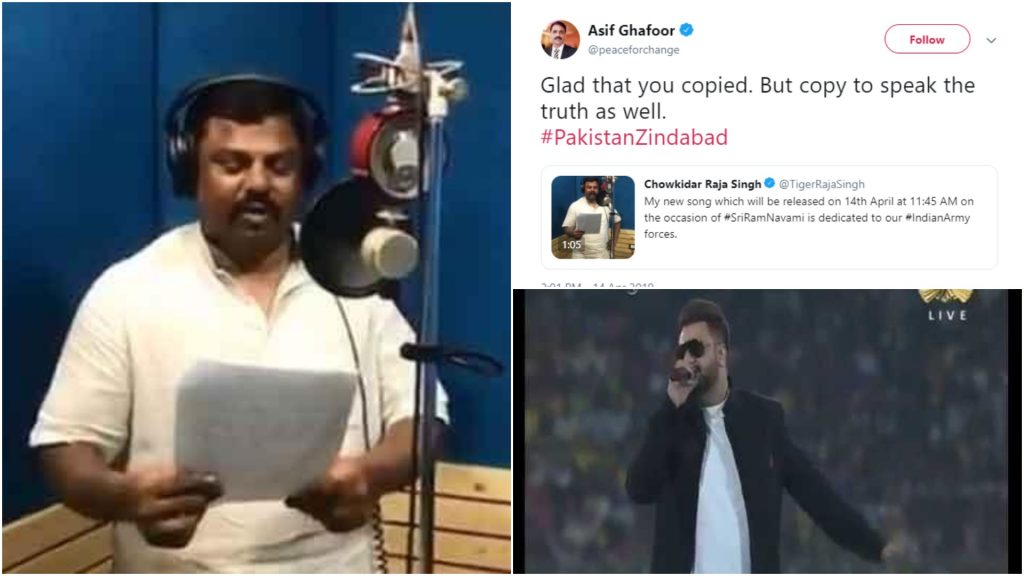 On a fine evening, the BJP MLA put a short lip of their party’s upcoming anthem and umm, it was a copy of ISPR’s song Pakistan Zindabad which wa sung by SahirAli Bagga. Khud sunlein!

My new song which will be released on 14th April at 11:45 AM on the occasion of #SriRamNavami is dedicated to our #IndianArmy forces. pic.twitter.com/Es391cE2PT

Glad that you copied. But copy to speak the truth as well. #PakistanZindabad https://t.co/lVPgRbcynQ

We’d suggest pouring cold water over burnt area to the BJP MLA after a reply so savage!

Tiger Raja Singh then took it to Twitter, claiming that Pakistan has stolen his song and we’re not sure if he even knows what he’s talking about

Good to see even #Pakistan media is covering my song #HindustanZindabad.

I'm more surprised that even a terriorst nation produces singer's. #Pakistani singer's may have copied my song we don't have to copy anything from a terrorist state like Pakistan. pic.twitter.com/nnXIinOt1E

And people did not spare him this time either, even the Indians couldn’t help but laugh at his confidence. The hashtag ChowkidaarChorHai quickly became the top trending hashtag on twitter in India.

From Jai hind to Hindustan zindabad and from daysh to Watan. ISPR played well.

Motoo still you've guts to say this after getting exposed of stealing our national song released on Pakistan Day 23rd March, way before you were born. 😂#ChowkidarChorHai #PakistanZindabad

DG ISPR gave statement on your song saying “it’s good if u copy our song but copy us in telling the truth too”
nobody expected indians could be so blatant about lying when it comes to F16s and Pakistani ISPR songs. 😄😳
🇵🇰🇵🇰🇵🇰🇵🇰🇵🇰@OfficialDGISPR @PakDefenceWing @peaceforchange

So after stealing our unofficial anthem Dil Dil Pakistan, they actually stolen Pakistan Zindabad too? 🤦‍♂️!! Now i fear for Pak Sarzamin#ChowkidarChorHai https://t.co/zXxXySg8ay

Even we’re trying to find the answer to this

So a BJP legislator is so obsessed with Pakistan that he lifted the ISPR tune and lyrics to dedicate to the Indian army?

And then came Shahid Afridi with another burning reply!

Leaders are always copied & I hope they also copy our peace initiatives too. #PakistanZindabad https://t.co/SZl0JXvNcz

Alexander Volberding gets his own rickshaw in Pakistan

5 songs you need to catch up on right now!

Celebrities show their patriotic side on social media today