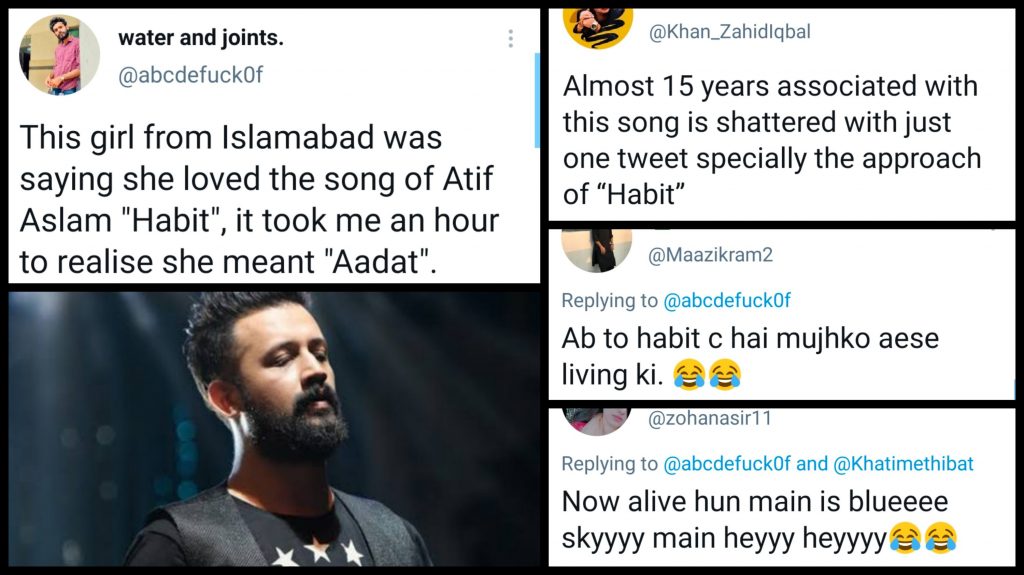 Don’t even talk to us if you don’t remember Atif and Gohar’s iconic debut with Aadat as Jal band. The song immediately catapulted the two to fame and bought them fans that are still going strong!

Talking to an Islamabadi girl, this man was a little confused when she told him that her favourite song was habit by Atif Aslam, it took him hours to process that she meant Aadat!

This girl from Islamabad was saying she loved the song of Atif Aslam "Habit", it took me an hour to realise she meant "Aadat".

And the netizens are screaming!

oh my God! can't believe how funny this tweet is. I'M DYING!!!

Is still my most favorite.

Almost 15 years associated with this song is shattered with just one tweet specially the approach of “Habit”#rest_in_peace_AADAT https://t.co/R8EvXzsv08

Mermaid is in a league of its own!

People were comparing the girl to Hania Aamir:

People were tweeting out their reactions:

Some refused to believe that it was an Islamabadi who said this:

Fans were not okay!

WHY WOULD SHE LISTEN TO SONG AND SAY ITS NAME WRONG. like that's the insult of songg

And while most people found it funny, others weren’t really sold on the fact that it really happened:

Although it didn’t happen but funny tha

On today's list of things that never happened https://t.co/d1YkIIi5L1

What are your thoughts on Atif Aslam’s song ‘habit’? Let us know on the comments below!

Ramsha Khan Rocks As Bakht In Shehnai & The Audience Is Loving It!