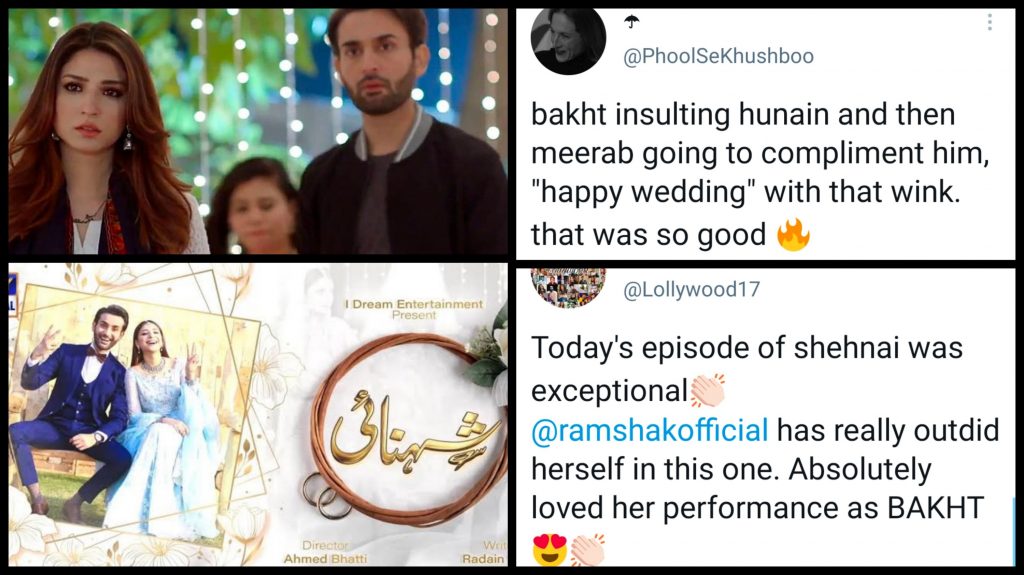 If there’s one drama that we’re loving, it’s Shehnai! Starring Ramsha Khan and Affan Waheed as Bakht and Meerab, the rom-com is one you shouldn’t miss. Exploring the very relatable themes of joint family system, jaidaad issues and arranged marriage, the drama has proven to be an absolute hit.

And while fans have been loving the entire cast, it’s Ramsha’s character Bakht that’s become the talk of the town after the episode last night where we see Bakht finding out that the love of her life getting married to someone else and what followed, blew our mind!

And we’re not the only ones who loved Bakht’s fierce side, here’s what the fans have to say:

bakht insulting hunain and then meerab going to compliment him, "happy wedding" with that wink. that was so good 🔥#shehnai

People were rooting for Ramsha:

Us too, we love the two together!

Meerab is Such an Adorable Being 🥺🤍
I am Loving This Pair 🖤#RamshaKhan #AffanWaheed #Shehnai pic.twitter.com/9dplRAqLp3

The scene where Bakht confronts Hunain won the internet!

Us after every episode of Shehnai:

People were living for the fierce Bakht!

She’s Ramsha Khan for a reason:

Fans were desperately waiting for the next episode:

I think we all agree!

Are you keeping up with Shehnai? Let us know in the comments below!

A Girl From Islamabad Called Aadat By Atif Aslam 'Habit' & People Are Screaming!

Best Dramas On Air This Season