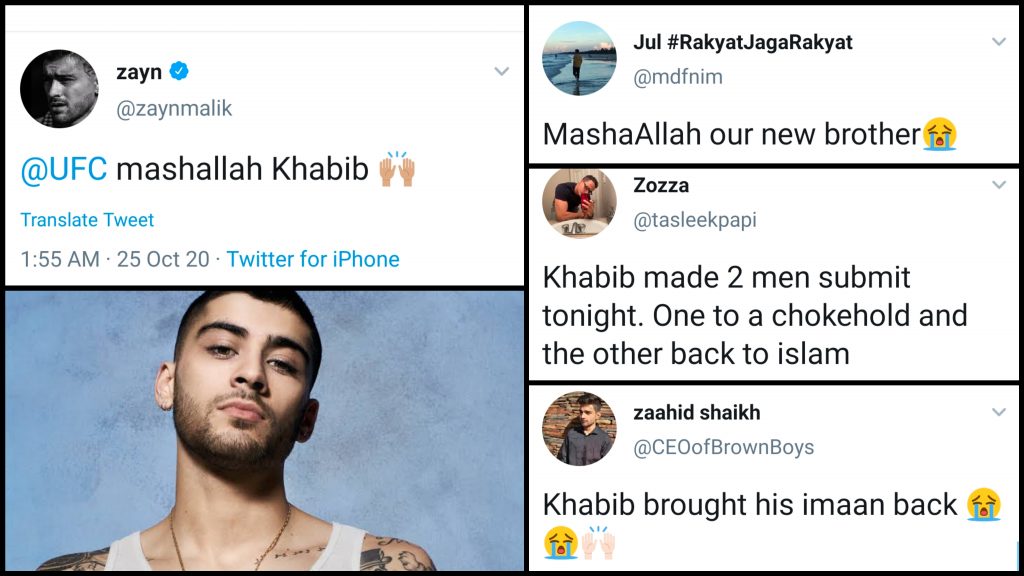 Following Khabib Nurmagomedov’s iconic triumph against Justin Gaethje, congratulations have been pouring in from all around the world with fans and celebrities lauding the fighter.

Praising the athlete on Twitter,Zayn Malik might have accidentally broken the internet as he mentioned the athlete followed by a ‘Mashallah:’

Revealing the news of him no longer being a Muslim a few years back, the tweet gathered massive feedback from fans:

Khabib brought his imaan back 😭😭🙌🏻 https://t.co/axktxH4mFD

People were speculating if Zayn has turned back to Islam:

That fight was so good that it made Zayn Malik a Muslim again… https://t.co/waN7EAejsW

Khabib made 2 men submit tonight. One to a chokehold and the other back to islam https://t.co/YA9gdASujm

Khabib so good Zayn Malik about to read isha for the first time in years https://t.co/NZQLo3Qp3O

There were memes, a lot of memes!

Khabib is so good even zayn is back to be muslim again https://t.co/gzyS0xERD5 pic.twitter.com/ldwZYhPw5e

People were guessing the kind of kid he’d been in school:

Type of guy to say he was “half muslim” in primary school https://t.co/an7yf2wGPc

People were assuming he’s back to being a Muslim:

zayn took a little spring break from Islam but now he is back https://t.co/vAphyRGJfJ

If you know, you know!

There's an imposter among us https://t.co/rViHQZ0Iqe

Because, they’ve got nothing better to do!

why is everyone going crazy ab him saying mashallah https://t.co/IFsJrokgDq

One more fight and he would’ve said the Shahada https://t.co/w2l3ACZEJS

Muslim twitter about to blow the fuck up. https://t.co/WaTXnsNEY1

People were wishing he goes back to being a Muslim:

Brother I hope you see the light and come back to Islam. https://t.co/XB1bYY2Swd

People were welcoming him with open arms:

welcome back to the ummah brother https://t.co/HEXPptgVHZ

Eveyone going crazy about "mashallah" should know that even some non-muslims say that and tbh there's a difference between non-practicing muslim and a non-muslim.

Before yall come for me let me mute the notification for this reply.

You man violating Zayn need to fix up, imagine he's on the brink of returning to Islam and he sees all of your quote tweets and decides against it. https://t.co/ikq5NcfUVO

All he said was “mashallah Khabib” idk why so many of you are commenting and judging his relationship between him and Allāh. No one is perfect, we’re all on our own journey. May Allāh guide him and guide us all. https://t.co/RzKJOFvQNd

What do you think about Zayn’s tweet? Let us know in the comments below!

The Mighty Return of Fahad Hussayn