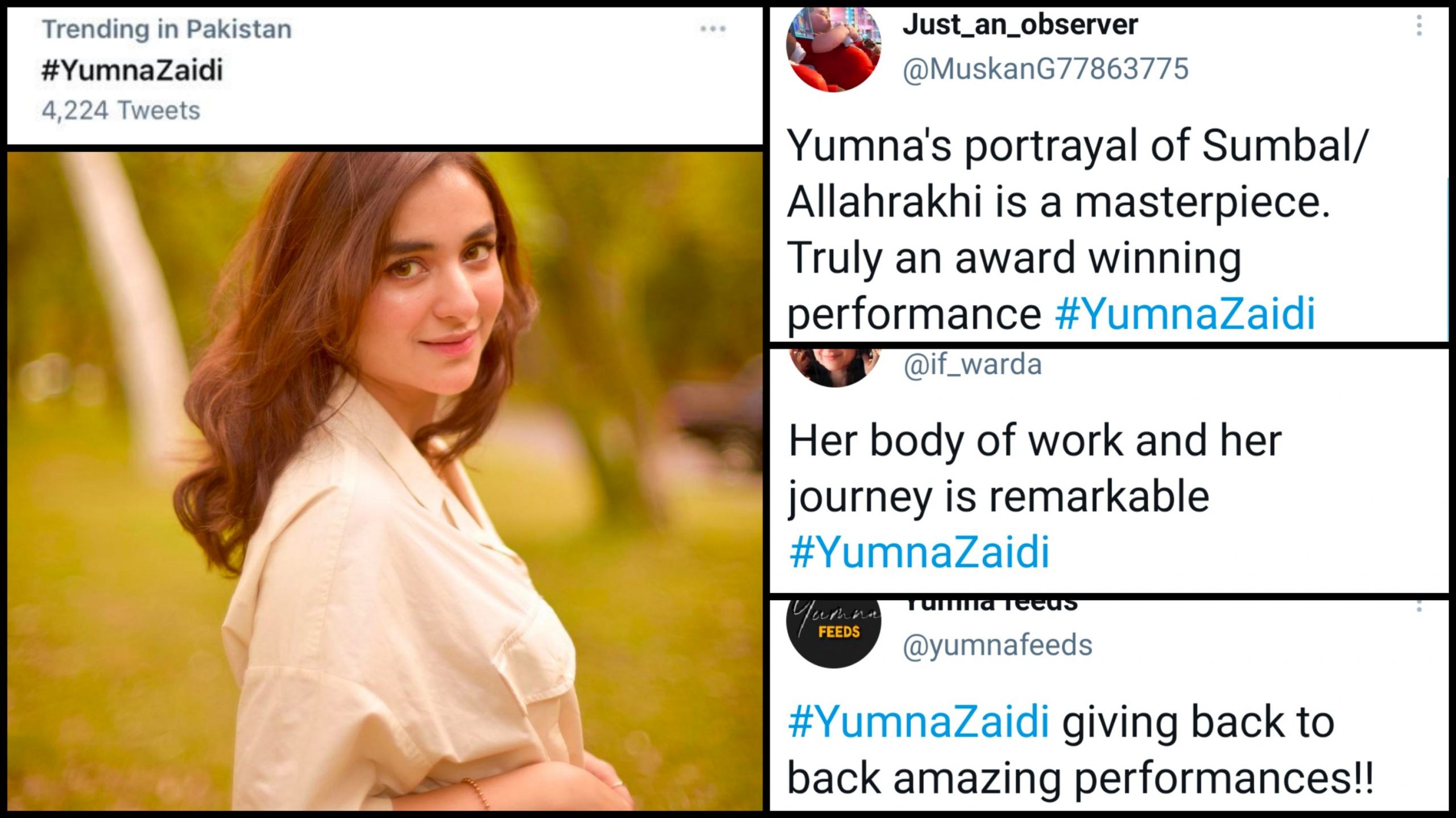 If there’s one actress who is a powerhouse of talent and versatile enough to mould herself into the most complex of characters, it’s Yumna Zaidi. Be it the iconic Shakera from Ishq Zah-e-Naseeb to the naive Mahjabeen from Pyar Ke Sadqay who ruled our hearts to the terrified Sila from Dar Si Jati Hai Sila to the brave and resilient Rakhi in DNUTN, the list of her iconic characters is way too long!

And as she announced her new project in collaboration with ISPR, her fans have taken it to twitter to share how proud they are of the journey she’s been on.

Making to the top trends on Twitter, here’s what fans have to say:

This came as a big surprise ! #YumnaZaidi being a part of Sinf e Aahan along with a stellar cast ! I usually thought after giving her stellar best with Bee Gul and Amna Mufti ! I wanted Yumna in an Umera Ahmed script and here it is ! 9 long years for this ! pic.twitter.com/J8Be4TLBh3

Fans were way too excited for her upcoming projects:

#YumnaZaidi still not over the fact though that Rakhi left her guggu ghora there and cried silent tears ! It's still in my mind ! Though! Pouring it out ! pic.twitter.com/c4g3Qxt9aD

#YumnaZaidi proved with ishq zahe naseeb that screen time doesn't matter. She was soul of the drama. pic.twitter.com/ZYym642L5D

#YumnaZaidi can't get over this at all! Those words ! Those eyes! That craft !!!!! pic.twitter.com/8bjwIj4YnP

#YumnaZaidi 's tranformation from Mahjbeen to Sumbul is worth appreciating. Isn't it?

What a beautiful journey:

Journey from Drama Thakan 2012 to Drama Dil Na Umeed To Nahi 2021 and Many Many More To Come Mashallah Alhamdulillah #YumnaZaidi pic.twitter.com/0wIUlcQaDh

#DilNaUmeedTohNahi will always be my favorite, no matter what!

No one other than #YumnaZaidi could have played RAKHI better… pic.twitter.com/uJ4TONMlHI

She is the standard, period!

Yumna is a standard this lady blow us away everytime with her performance, those who say pakistan doesn't have good content have obviously not seen her dramas#YumnaZaidi #yumnazaidi pic.twitter.com/RYdLG4zXrs

Her work speaks volumes of her talent:

Let's talk about #YumnaZaidi She is here only and only because of her talent and not because of any controversy. That's what I love about her.

No one perform extremely emotional scene so subtly yet so impactful…like #Yumnazaidi
She is in league of her own and doing wonders every week#DilNaUmeedTohNahi pic.twitter.com/s5nUaRPPLD

These two Queens really be carrying the whole industry on their backs.
2022 is going to be theirs for sure😎🙌
{#yumnazaidi} {#sajalaly} pic.twitter.com/MlcGOxKfwu

#YumnaZaidi giving back to back amazing performances!! Now I just can't wait for Parizaad, Ishqelaa and Sinf e Aahan.

One of the most finest actress of pakistani industry 😍#YumnaZaidi

She really is the standard, man!

From Mehak of #Thakan to Rakhi of #DNUTN
I never skip any of her serial and never got bored . Always she gave me goosebumps in every character she chose off 💥✌️
YES… she is #YumnaZaidi 🤞❤️#DilNaUmeedTohNahi #DilNaUmeedToNahi pic.twitter.com/KKVmkehIjJ

Fans were living for it!

And how she nails every role she selects!

#YumnaZaidi is a daring actress. Picking a new challenging character with every script. Can't wait to see her as Annie (A role of a blind RJ) She is going to touch everyone's heart with her performance as usual!

Her body of work and her journey is remarkable #YumnaZaidi

People were thanking her for making the future dramas exciting:

#YumnaZaidi jee thank you for giving us hope in the upcoming drama session. Kuch to Acha aa reha hai for sure with #parizad
And #sinfeahan @yumnazaidiactor

What role do you love the most played by Yumna? Let us know in the comments below!

Boys Are Guessing What's In The Picture & We Can't Stop Laughing At Their Replies!