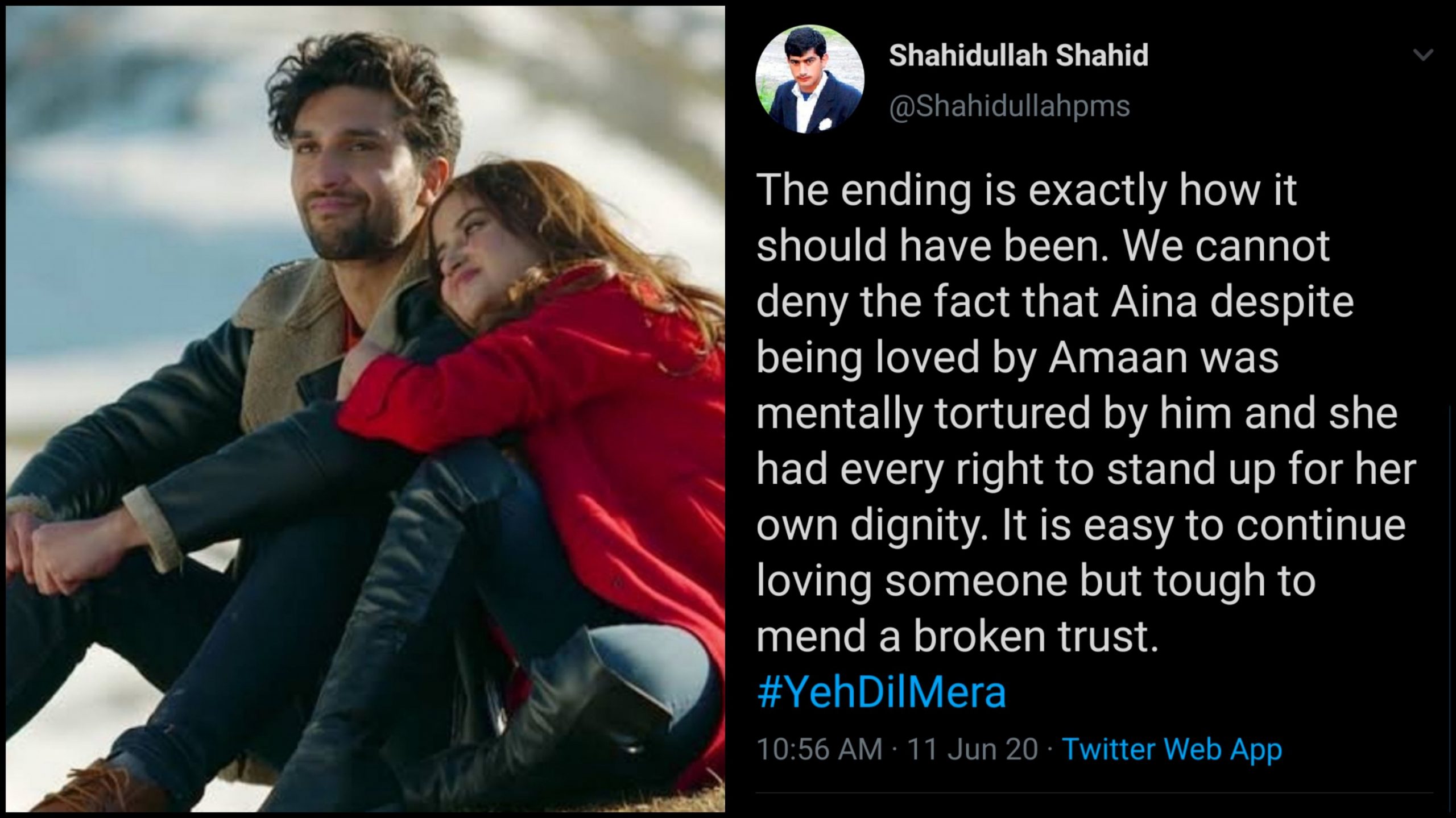 After 33 thrilling episodes, Yeh Dil Mera finally came to an end last night. With Aina still unsure but very much in love with Amaan, the ending took the audience by surprise!

While the drama proved that Sajal and Ahad are the next big thing in the industry, people also loved how well Adnan Siddiqui played Mir Farooq Zaman till the very end! But it was the open-ending, leaving it all to the audience’s interpretation, and here’s what they have to say!

The open end to their story makes a lot of sense actually. With their history, there was no way they could’ve gone back to their normal selves and lived with eachother. My only wish was that amaan got a chance to tell his side of the story, he deserved 💔. #YehDilMera pic.twitter.com/CKZxWbsWE0

For some, it was the perfect ending:

Neither the writer could given a happy ending,else you all would have thought that she glorified toxic relationship.
Nor she could have give a sad ending otherwise it would be injustice to amaan's character.
So it was the best ending @FarhatIshtiaq could ever write!#Yehdilmera

The ending of #YehDilMera was perfect considering the emotional turmoil both Aina and Amaan went through. Amaan might have had his reasons for whatever he did, but Aina did face a lot of collateral damage in it…her life turned upside down, which also can't be ignored.

They both need time to heal and they will eventually. My friends Amaan and Aina's separation is temporary its an OPEN ENDING. She loves him but needs time to heal and forgive him. Long story short they will UNITE iss janam main ab rona band karo.😑😂#YehDilMera pic.twitter.com/mnRz0h1xhR

People were feeling for Amaan:

I know I know it’s a justified ending but he realised, he accepted and he regretted his mistakes… so he did deserve a second chance..my heart cries for Aman a little more because he has always been a loner..💔 he deserved to be loved..#YehDilMera

You all are just not focusing on this particular last scene,such a conclusive end for ydm with a great message!
Also this place is so beautiful man,the visuals😍#YehDilMera pic.twitter.com/S4dxiP0bUT

For many, the ending was justified:

About the ending of YDM: It was justified, well thought and different from all other serials. You cannot expect a relationship built on lies and deciet to continue when the truth comes out. And obviously, the visuals of the last scene were worth a million!! Brilliant #YehDilMera

Some were trying to reason:

The ending was written quite justified…don't you remember you all were the ones who kept ranting about "YDM shouldn't have a happy ending or otherwise i am gonna riot"
I remember it clearly.
So why are you guys not happy with the end now?
What happened now?!#Yehdilmera

Some thought that Amaan deserved a second chance:

No matter what, Amaan deserved LOVE. And a freaking SECOND CHANCE! He realised, he regretted, he apologized. He has had his fair share of flaws and mistakes but what hurts me the most is that he was ALWAYS ALONE and now, he always will be😭😭💔💔#YehDilMera

The last few scenes were magical! Such beautiful places and these two! #YehDilMera pic.twitter.com/oY64ViVSFn

People had their own theories:

The only interpretation you need to understand the ending:

The ending is exactly how it should have been. We cannot deny the fact that Aina despite being loved by Amaan was mentally tortured by him and she had every right to stand up for her own dignity. It is easy to continue loving someone but tough to mend a broken trust.#YehDilMera

End may be bittersweet but loved the show, especially coz of the exceptional performances by @Iamsajalali & @ahadrazamir & unique storyline by @farhatishtiaq. It was a brave attempt. With all its directional & editing flaws it was the best show onair & I just loved it #YehDilMera pic.twitter.com/Ai7gAGM5IS

People were all praise for Farhat Ishtiaq and her magical characters:

The Story Of love and Revenge comes to the end… ❤️❤️❤️#YehDilMera pic.twitter.com/1Rl5TNOKk1

Amaan didn't die,He live to see how much Aina loved him even after knowing the truth that he used her. Romance can't get over the Toxic relationship they both suffered What else be more justified end other than this?
That's the reason I adore you😍❤ @FarhatIshtiaq #YehDilMera

just a reminder that this is ahad's best performance of his career so far. he truly deserves all the praise and recognition for it! #ahadrazamir #yehdilmera pic.twitter.com/49mvjJA4p4

Ok but this particular scene will always have my whole freaking heart.😭❤️
When bua g went to Amaan, Aina couldn't control herself to see her love… She stood up to see Amaan and she only not cried herself but also she made me cry 😭😭💔.
She still loves him 😩❤️#YehDilMera pic.twitter.com/c1SHVWMR3E

And guys, that’s how Amaan and Aina made a place in our heart, so special, it hurts to see the drama end:

The cutest "pheww" and "ooo" till date!:(#YehDilMera will be missed! pic.twitter.com/mH4NoLL28p

How did you guys like the last episode? Let us know in the comments below!

10 Pakistani Ads That Still Make Us Laugh Out Loud!

Menswear Designer Amir Adnan Just Recovered From COVID-19 – Here's What He Did!

Celebs, designers congratulate Ahad and Sajal on their engagement