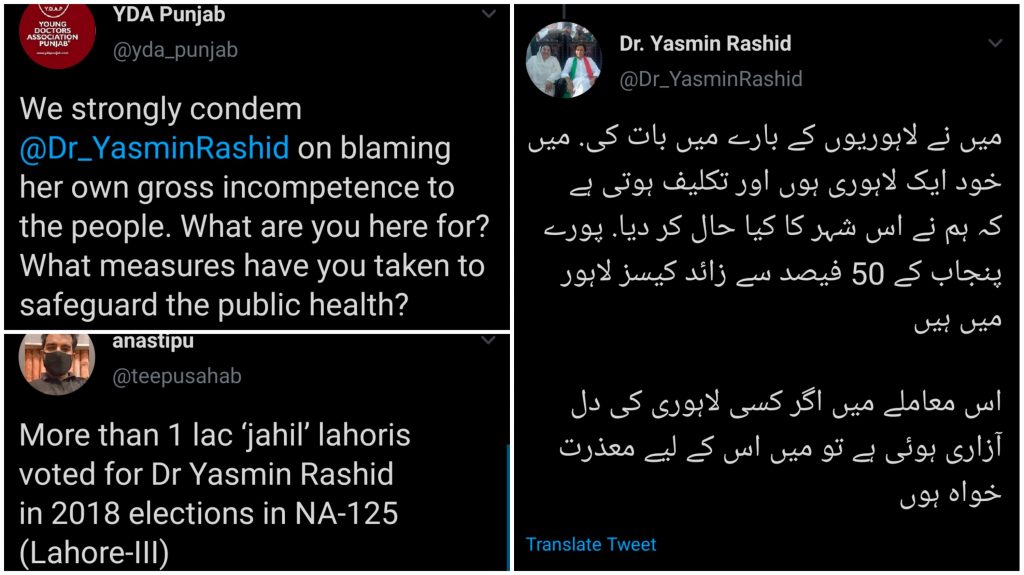 With Covid-19 cases on the rise in Pakistan, the government is opting for a selective lockdown to control the spread and is urging people to follow the recommended SOPs every time they step out of their houses.

The lockdown is being implemented from today in Lahore, and to shed some light on the alarmingly high number of cases in Lahore, Punjab’s Health Minister, Dr. Yasmin Rashid, was invited to a talk show and things didn’t really go well for her as she called the Lahoris an ‘alaehda makhlooq’ in the heat of the moment:

And people were divided, some agreed with her while some disagreed and were furious!

Guess the government considers Pakistanis too jaahil to bother to pretend to govern at all.

People were demanding an apology:

I am SHOCKED to the moon and back after the remarks of a Provincial MINISTER about #Lahoris How dare you put the blame of your in-competencies on innocent people of #pakistan
I am very angry i apologize for my harsh words! But people are dying because of you! #YasminRashid pic.twitter.com/mW6ub1Zam3

People were blaming the government for their incompetence:

We strongly condem @Dr_YasminRashid on blaming her own gross incompetence to the people. What are you here for? What measures have you taken to safeguard the public health? pic.twitter.com/wjOW5KBcMM

Many regretted voting for her:

People were bashing her and the government:

I just heard #YasminRashid, Provincial Minister of Punjab for Primary & Secondary Healthcare calling Pakistani Nation ‘jahil’ on a TV program, well i would say right back at ya, you jahil, incompetent clown. 🤡

People were sharing stitched videos, taking things out of context:

Lahoris are a weird creature, for them everything is a joke, they are so Jaahil they dont listen and dont care; no other nation is bigger in jahaalet and stupidity than Pakistanis; Punjab Health Minister Dr Yasmin Rashid says #CoronaVirusPakistan pic.twitter.com/YND8NULp5w

Some wanted her to stop playing the blame game:

Others argued how people say the same thing themselves but are angry because a minister said it:

Some actually tried bringing the actual clip to light to explain the context:

Watch this FULL CLIP to see where & in what context the term JAHIL was used by @Dr_YasminRashid — it was in terms of the OPPOSITION 🤣 being listed in that category 👍🏽 pic.twitter.com/oLUR0sKWhx

Some were trying to justify what she had said:

I can understand that many people are offended due to the recent remarks of @Dr_YasminRashid but given the efforts that she has put in since this disease entered Lahore I think we should give her that space to show a bit of anger. Work pressure can be very stressful.

Some explained the context:

This is what Yasmin Rashid meant when she said Lahoris are jahil. Btw this video is a month old pic.twitter.com/0vuNUhWc5b

So Yasmin Rashid called Pakistani People 'JAHIL'…😡
Lets start following all the SOPs… Not sell our BLOOD PLASMA… Keep necessary items at their true prices and prove her wrong… Lets rub it in her face..
How dare she?..
Thora ziada hogya nahi… 🤔 Jahil he theek hain.. 🤷‍♂️ pic.twitter.com/AIn4riFoZH

Some looked at things differently:

Some took it as a compliment 😂

I do agree with Yasmin Rashid because I personally know many lahoris who still believe that “Corona yahodiyan di sazish ay ty daktar teaka la kay banday maar raye nay”. So there's no need to be offended over her remarks.
Ignore it as you're ignoring preacautions!#YasminRashid

Dr. Yasmin then took to twitter to clear that she didn’t specifically target Lahoris as jaahils, but she used the word ‘hum:’

She then admitted that she used the word ‘alaehda makhlooq’ in the heat of the moment:

And people were actually on her side:

You do not have to apologise at all Doctor. You know how vile our people and media is, they manipulate and tweak statement. You are absolutely right, hum Jahil qaum hain and you all have a tough job ahead. May Allah make it easy for you all. Ameen.

God bless you Dr Yasmin. There is no need for you to give an explanation on what was clearly a repeatedly cut/doctored video.

Your dedication and hard work is second to none. Keep it up 👍

You were absolutely right. Not just Lahoris, entire nation is at fault. They don’t care whatsoever. No leadership from Earth or Mars can handle this nation with full of ignorance and arrogance. They are responsible for flooding and collapsing the already weak healthcare system.

What do you think about Dr. Yasmin’s remarks? Let us know in the comments below!