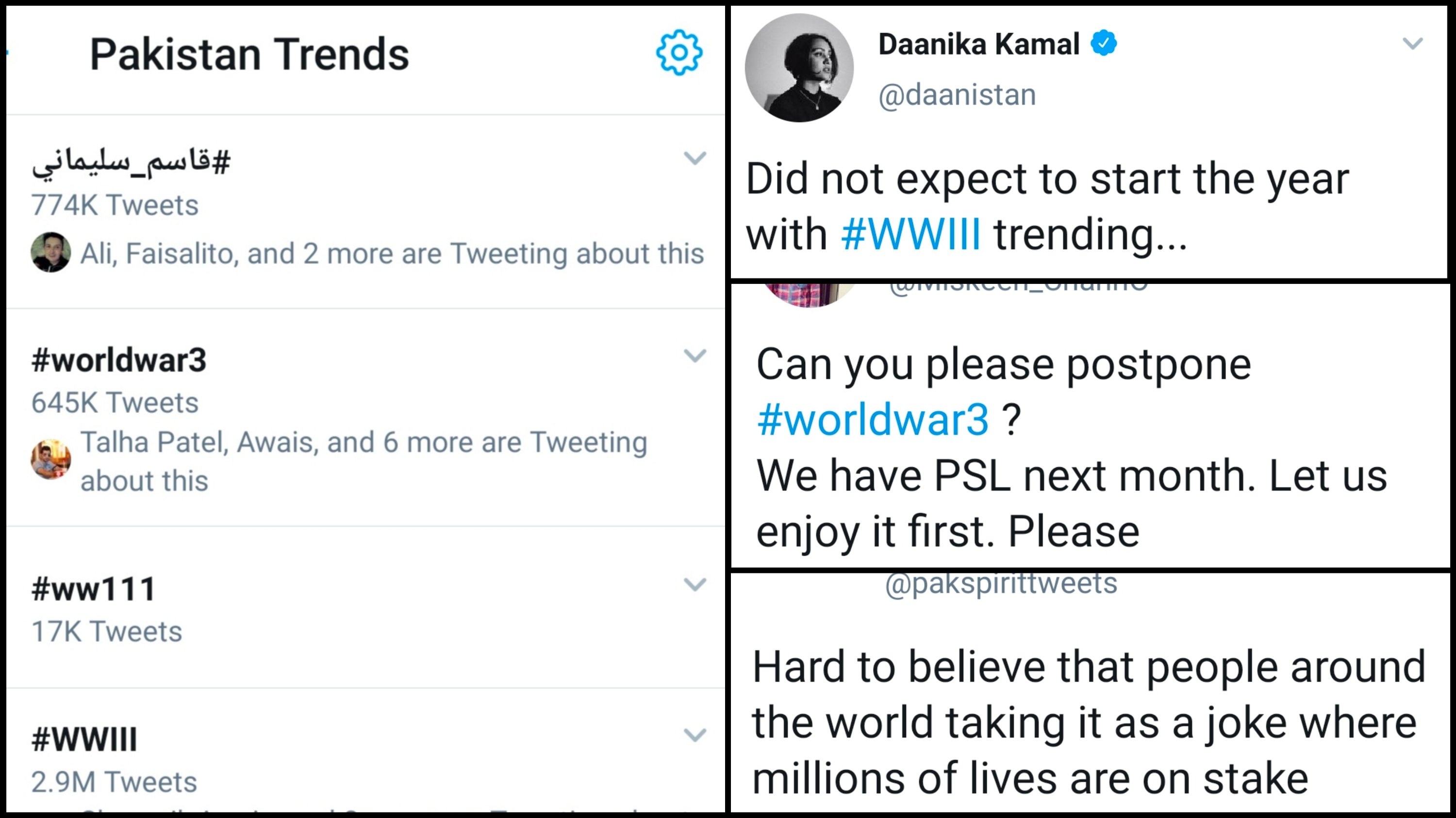 2020 was a year of change and peace for many, but only 4 days into the new year, the hashtags regarding war have been a top trend on Twitter globally after an Iraqi military leader Qasem Soleimani was killed in an air strike by the US.

And the internet is losing it!

Can’t believe that just 72 hours into 2020 & the world is already teetering on the edge of war. I guess this is wht happens when the "leader of the free world"takes unilateral decisions without regard for international laws. This isn’t just abt Iran &USA.God protect us #Soleimani

Did not expect to start the year with #WWIII trending…

And while some were worried, others were having a field day!

Can you please postpone #worldwar3 ?
We have PSL next month. Let us enjoy it first. Please#WWIII

me on the battlefield during world war 3 pic.twitter.com/1lVj8gp5rF

Some were living their best life:

Me eating my favorite snacks before #worldwar3 #WWIII pic.twitter.com/N9YqQyKT91

Fortnite Players showing up to the Battlefield with their Custom Skins #WWIII pic.twitter.com/ro9jr6jPoL

Some were absolutely hopeless:

Planning what to do next:

*Everyone having the high hopes for the new decade*

But Me, after hearing about Iran vs USA. #WWIII

Me laughing at all the #worldwar3 memes then realizing it could actually happen.#WWIII pic.twitter.com/u9kTxPhdTa

Girls taking advantage of the patriarchy:

Good luck in the war boys, me and my girls know our place 👋🏻 #WWIII pic.twitter.com/3nu8oX3qD2

Jokes about #WWIII aren’t funny. But does anyone want to confess their love for me before the war begins?
C'mon guys it's the right time.

With many memes all over social media, people were mad at others taking war as a joke:

American Weapon industry after knowing that there is a possibility of World War-3#WWIII#worldwar3 pic.twitter.com/S4Gv50KZCX

There are always consequences:

For those who consider war a videogame in some virtual reality, who have not seen the body parts, walked over the bloodstained shards of broken glass, smelt death and overloaded on destruction, lost friends, family and colleagues – to you, #WWIII trending worldwide must elate you

War memes is all I’ve seen since the morning, do they even know what war means.#WWIII #worldwar3 #Soleimani

People are happy to start WW111 while they can't even starve for a day. #StartStarving #WWIII

With so much tension worldwide we can only hope that better sense prevails. What do you think about this situation? Let us know in the comments below!

15 dramas that addressed social issues like no other, breaking all stereotypes!