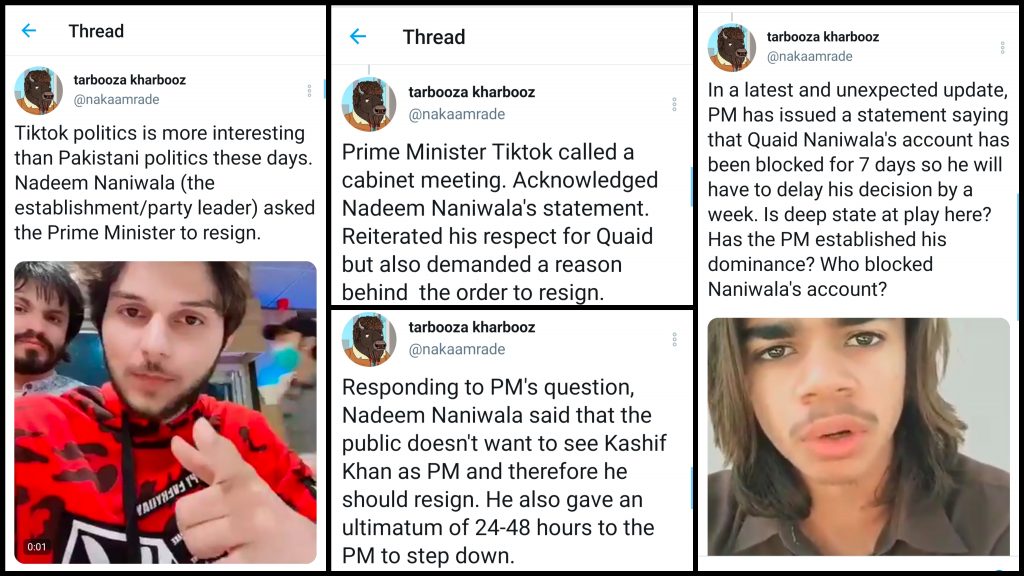 And just like we have Model United Nations (MUNs) taking place in educational institutes, tiktokers have their own version of what we like to call Model Pakistan Politics where they’re seemingly trying to run the country on their own and it’s so much more interesting than the real politics in the country right now!

And it’s just a whole mood, with the PM acknowledging the demand for his resignation:

Responding to PM's question, Nadeem Naniwala said that the public doesn't want to see Kashif Khan as PM and therefore he should resign. He also gave an ultimatum of 24-48 hours to the PM to step down. pic.twitter.com/WVB37EBANK

Uh oh, politics can be dirty!

In a latest and unexpected update, PM has issued a statement saying that Quaid Naniwala's account has been blocked for 7 days so he will have to delay his decision by a week. Is deep state at play here? Has the PM established his dominance? Who blocked Naniwala's account? pic.twitter.com/WX3tu9cWdz

We stan a PM who takes criticism positively:

It's hard to make sense of Nadeem Naniwala's account blockage. It can't be the PM himself, considering he clearly respects his Quaid and follows everything he says. Shehbaz Sharif airport nahi pohanchay wala maamla yaad araha hai. pic.twitter.com/ld8mnLJp6F

The exposè of the year:

An old video of PM has surfaced. According to some body language analysts and behavioral experts, PM's recent speeches and decisions revealed a dictatorial tendency. Could this be linked to the Naniwala's decision to ask for the resignation? pic.twitter.com/3ICvxNEUzR

Just incase you needed to see the headlines:

The whole narrative has the internet way too invested!

I'm way too invested in this thread

I pray it doesn’t end up with a martial law. https://t.co/V0haRawmkG

Dang this was thrilling

People have been loving the developments:

Hashtags to de-seat the ruling PM were ready:

They brought “Vote of no Confidence” against Tik Tok’s PM. 😂😂😭😭😭 https://t.co/iPHbsScG5S

People had a lot to say on the matter:

I already told y’all kashif khan doesn’t deserve to become the PM. He should be disqualified. But we have this bad habit of not addressing the REAL ISSSUES. https://t.co/6zgVagm19R

People were lauding them for sensible journalism:

This is what sensible journalism is .
Prominent journalists ! Take notes. https://t.co/KpvG0ykowp

We might have already downloaded it just for this:

The only thread you should read for today https://t.co/TqO4poD0fX

And it’s only going to get even more serious:

Oh my days, this is serious! https://t.co/Nsw9BrHoaj

We’ll have to wait and watch:

Are you excited to see what’s next? Because we are! Let us know in the comments below!

HOME CHEFS CAN’T GET OVER SHEHAR BANO RIZVI’S COOK BOOK, ‘VIRSA – A CULINARY JOURNEY FROM AGRA TO KARACHI’ AND HERE’S WHY!

Behind The Pen: Entertainment Journalists Who Write It Best About The World of Stars!