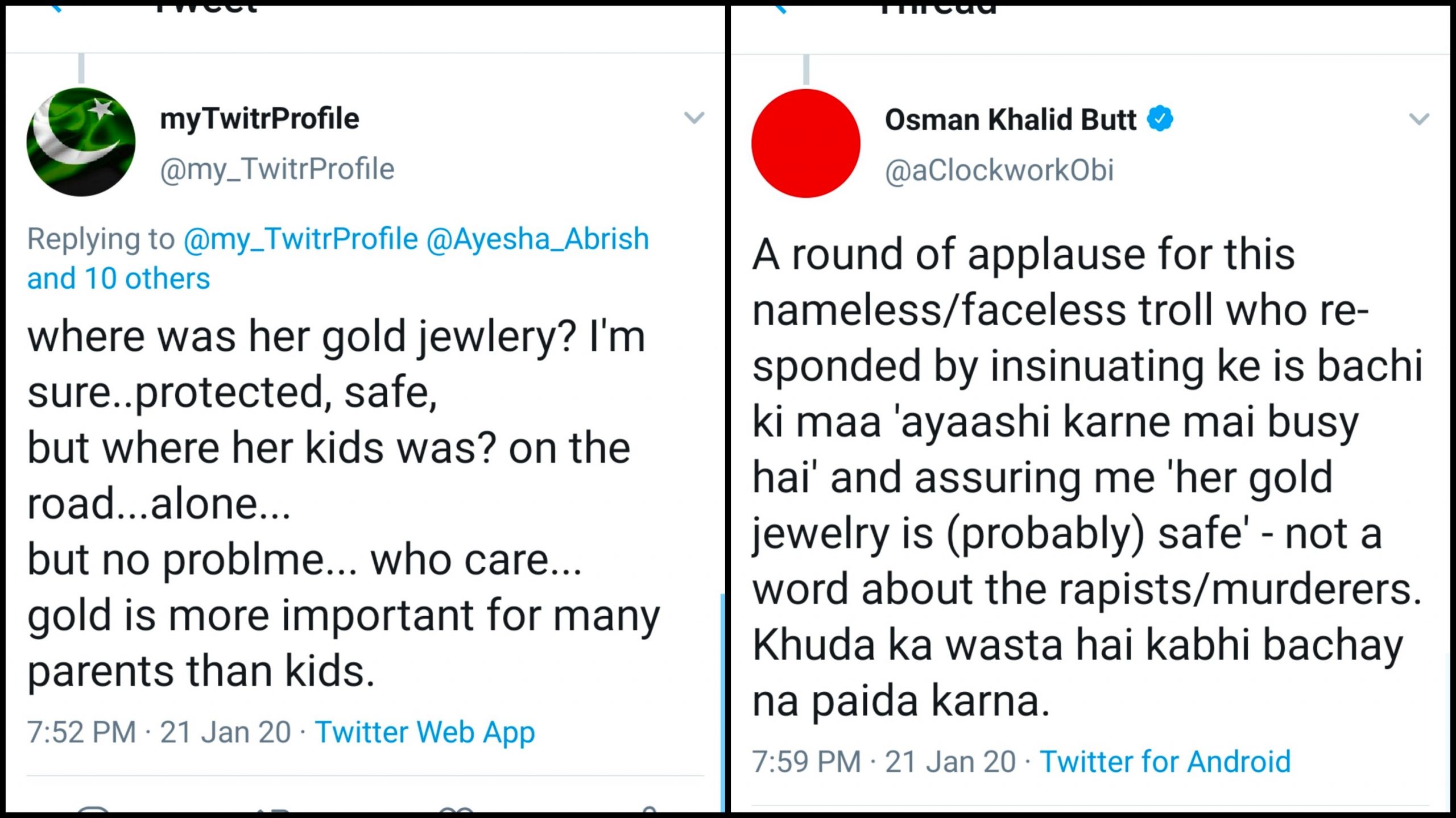 The internet has been trending the hashtag #Huznoor and #HangChildRapists after a body of a seven year old was found who was abducted on her way back and raped.

And while many have been more than supportive asking for justice for Huznoor, some people have been busy blaming the girl’s parents for letting her roam out in the streets alone:

This is heart breaking..but what about her parents?
I wonder if mother will also leave her gold jewelry unprotected like she did with her kid?
her parents are equally responsible here.

where was her gold jewlery? I'm sure..protected, safe,
but where her kids was? on the road…alone…
but no problme… who care…
gold is more important for many parents than kids.

One of those tweets caught Osman Khalid Butt’s attention:

You… seriously have the audacity to shame the mother of a girl who was raped and murdered… on her way back home from school? https://t.co/vqwcxKNCqA

And he was in disbelief at the mentality:

A round of applause for this nameless/faceless troll who responded by insinuating ke is bachi ki maa 'ayaashi karne mai busy hai' and assuring me 'her gold jewelry is (probably) safe' – not a word about the rapists/murderers.
Khuda ka wasta hai kabhi bachay na paida karna.

Osman continued to say how these trolls have no empathy for the one’s suffering and how these trolls love criticising the parents but not the rapists, who are the real culprits. And other netizens agreed:

Our society works on 'shame the victim but not perpetrators'

And it wasn’t just Osman Khalid Butt who was appalled at the mentality:

bro die someone else can use your resources better

People wished for a pinch of empathy:

Learn a thing or two about empathy

This kind of mentality is the reason why these incidents are increasing along with raping women in which she is also the one who is raped and who gets the blame too. Sigh

Some think these trolls should be hanged too:

I guess people possessing mentality like yours should be hanged too.

And the troll was justifying the statement over and over again:

people bashing on me because they are oky with leaving their kids alone…
if u can't protect ur kids ..and okay with leaving them on ROADS .. ALONE… u r bad parents…
and so sad that this girl had such parents.

People had enough of the trolls:

Sit down puttar and pray to Allah for safety and protection. No one needs your B on this.

Blame everyone but the rapist:

Our society works on 'shame the victim but not perpetrators'

keep your kids away from everyone and in cages.

Are you for real? Do you even realize what nonsense you are saying. You are a shame to humanity. Go die somewhere. This is wrong with social media that assholes like you can join and say whatever they think using there microscopic brain. Jahil. Rot in hell.

What do you think about trolls blaming the parents here? Let us know in the comments below!