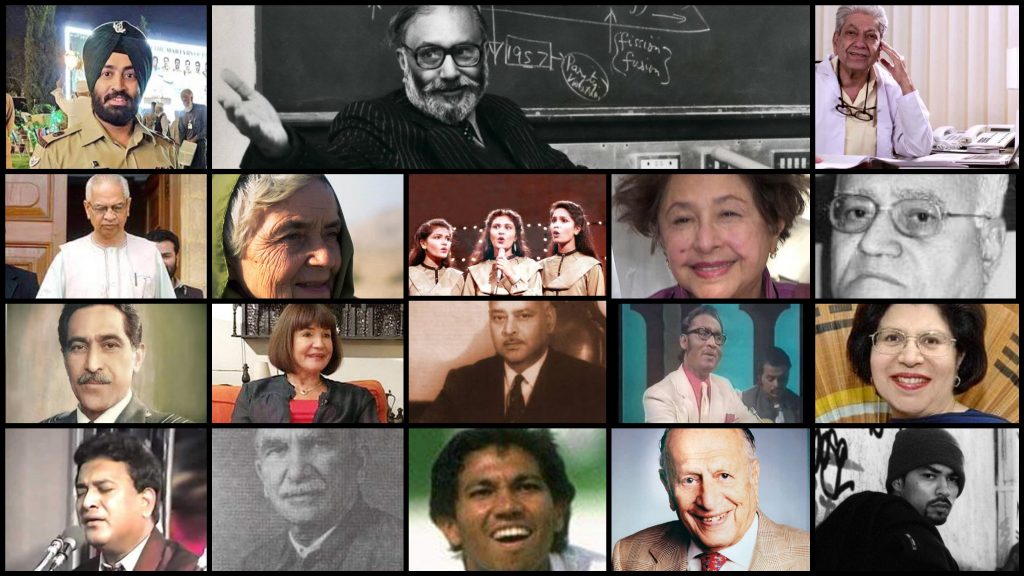 National minorities day was observed throughout the country yesterday and Pakistanis paid their respects to via seminars, social gathering and tweets.

To recognize the contribution and sacrifices of minorities in the country, this man has compiled a thread of all the heroes and we guarantee it’s the best thing you’ll read today!

“Tribute to the ‘White’ of the Pakistani Flag”

1. Group Captain Cecil Chaudhry was a Pakistani academic, human rights activist and veteran fighter pilot who fought in the 1965 and 1971 Indo-Pak wars. He was awarded the Sitara-e-Jurat.#NationalMinoritiesDay pic.twitter.com/x46NOJwuec

Starting off with Cecil Chaudhry, he moved to the iconic Benjamin sisters:

2. Benjamin Sisters were a Pakistani singing group of three sisters, Nerissa, Beena and Shabana Benjamin. They participated in music learning programs aired on Pakisan Television from 1968 to 1987 conducted by Sohail Rana and also appeared in the TV talk show Silver Jubilee 1983. pic.twitter.com/aYzDDMck7I

He then moved to Justice Rana Bhagwanda:

3. Justice Rana Bhagwanda served as the acting Chief Justice of the Supreme Court of Pakistan (CJP). He also worked as the Chairman of Federal Public Service Commission of Pakistan.

He wrote a number of poems in praise of Prophet Muhammad PBUH. pic.twitter.com/Dl3fTg9HT0

Moving the Dr. Faridoon Sethna whose legacy is now being carried forward by his son Zaryab Sethna:

4. Dr Faridoon Sethna is a venerated gynecologist in Pakistan who served as Chair and Medical Director of Concept Fertility Centre. He has served as Medical Superintendent of Lady Dufferin Hospital Lyari. Among his many patients was former Prime Minister Benazir Bhutto. pic.twitter.com/zp8K90KTke

He then shares with us Major Harcharan Singh:

5. Harcharan Singh is the first Sikh officer to be recruited in the Pakistan Army. He was commissioned by the Chief of Army Staff General Ashfaq Parvez Kayani on 27 October 2007 at Pakistan Military Academy in Kakul. He is presently at the ranks of Major. pic.twitter.com/oRLg764Otg

He then moves to chef Florence Villiers:

6. Florence Villiers is a celebrated chef and owner of Cafe Flo which is Karachi's famous French restaurant. Florence was responsible for introducing Karachiites to French cuisine. Cafe Flo established excellent standards of dining and food. pic.twitter.com/KcgeegtGvU

Then comes Dr. Ruth Pfau whose services shall never be forgotten:

7. Dr. Ruth Katherina Martha Pfau was a German born nun who devoted more than 50 years of her life to fighting leprosy in Pakistan. In 1996, Pakistan was declared by the WHO to have controlled leprosy. In August 2010, she was awarded Nishan-i-Quaid-i-Azam. pic.twitter.com/A2DERnYJSo

He then pays homage to Dilshad Najmuddin:

Next comes Dr. Abdus Salam who won a Nobel Prize in Physics:

9. Dr Abdus Salam was a Pakistani theoretical physicist. He won the 1979 Nobel Prize in Physics for his contribution to the electroweak unification theory. He was the first Pakistani to receive a Nobel Prize in science and the second from an Islamic country after Anwar Sadat. pic.twitter.com/ckcnJfDr0w

He then moved to acknowledge the efforts of Jamshed Nussarwanjee Mehta:

10. Jamshed Nusserwanjee Mehta was the first elected Mayor of Karachi and is known as the "Maker of Modern Karachi". He was the father of Scouting in Sindh. He was also one of the founder members of the Boy Scout Movement in India, and later on in Pakistan. pic.twitter.com/twF7YjuG3O

Then comes the forgotten star of Karachi, SB John and his family:

11. SB John is a forgotten star of Karachi. Accompanied by his wife and two sons namely Robin and Glenn John, John used to sing gospel on Christmas Eve, on PTV. pic.twitter.com/3akP5QkX4z

Famous for her literary work, Bapsi Sidhwa was next:

12. Bapsi Sidhwa is a renowned novelist of Pakistani origin. She is settled in the US and is best known for her collaborative work with Indo-Canadian filmmaker Deepa Mehta. She has taught at the University of Houston, Rice University, Columbia University and Mount Holyoke College pic.twitter.com/1Ne4rykYfy

13. Aban Marker Kabraji is a Pakistani biologist and scientist of Parsi origin. She is regional director of the Asia Regional Office of IUCN, the International Union for Conservation of Nature. Previously, she was country representative for the IUCN Pakistan office. pic.twitter.com/iFy4PiL6PV

He then moved to Anil Dalpat Sonavaria, his period brief but meaningful!

14. Anil Dalpat Sonavaria was the first Hindu ever to play Test cricket for Pakistan. Dalpat was a lower-order batsman and wicket keeper. He represented Pakistan for a brief interval in the early 1980s as a replacement of Wasim Bari. pic.twitter.com/0aOjjrWC0l

Then came the iconic Arthur Nayyar, who was very popular in the 70s and 80s:

15. Arthur Nayyar, known popularly as A Nayyar, was Pakistan's iconic playback singer. He was one of the most popular singers of film industry in 70s and 80s. Besides he sung many ghazals and geets for Pakistan Television and earned much deserved acclaim. pic.twitter.com/BZ7IaxAZWU

Then comes the Principal for both St. Lawrence and St. Patrick’s, Anthony Theodore Lobo:

16. Anthony Theodore Lobo was a Pakistani Roman Catholic bishop. He remained the Principal of St. Lawrence's Boys School Karachi and Saint Patrick's High School, Karachi. He was awarded President's "Pride of Performance " Award in 1990 for his services to education. pic.twitter.com/H3L7i2IJzj

Next comes the undisputed king of Punjabi rappers, Bohemia!

17. Roger David better known by his stage names Bohemia, Raja and The Punjabi Rapper is a Pakistani American Rapper and music producer from California. He Raps in Punjabi and describes himself as "The King of Punjabi Rapper" and the "creator of Punjabi rap". pic.twitter.com/FqgkrHadSP

Next he moved the longest standing diplomat, Jamsheed Marker:

18. Veteran Pakistani diplomat Jamsheed Marker was listed in the Guinness Book of Records as having been “ambassador to more countries than any other person” and also for being “the world’s longest serving ambassador”. He was awarded Hilal-e-Imtiaz in 2003. pic.twitter.com/RKwlJC3hUd

Next was the man who served as Pakistan’s first non-Muslim Chief Justice, Albert Robert Cornelius:

19. Pakistan's first non Muslim Chief Justice was Justice Alvin Robert Cornelius. He was jurist, legal philosopher and judge who served as the 4th Chief Justice of Pakistan from 1960 until 1968. He served as Law Minister in the cabinet of Yahya Khan, 1969 – 16 December 1971. pic.twitter.com/W5cEq4efH5

He ended the list on Air Commodre Władysław Józef Marian Turowicz is considered as one of the chief architects of the PAF and Pakistan’s space program:

20. Air Commodore Władysław Józef Marian Turowicz is considered as one of the chief architects of the PAF and Pakistan's space program. He remained administrator of SUPARCO from 1967 to 1970. He was a central figure in developing high-tech rocket and missile technology. pic.twitter.com/EBCbmPnETW

We owe so much to the minorities that live amongst us, and Diva salutes them for their undying efforts!

Birthday Special: 5 Reasons Why We Believe Aimal Khan Is The Best Male Model We Have!