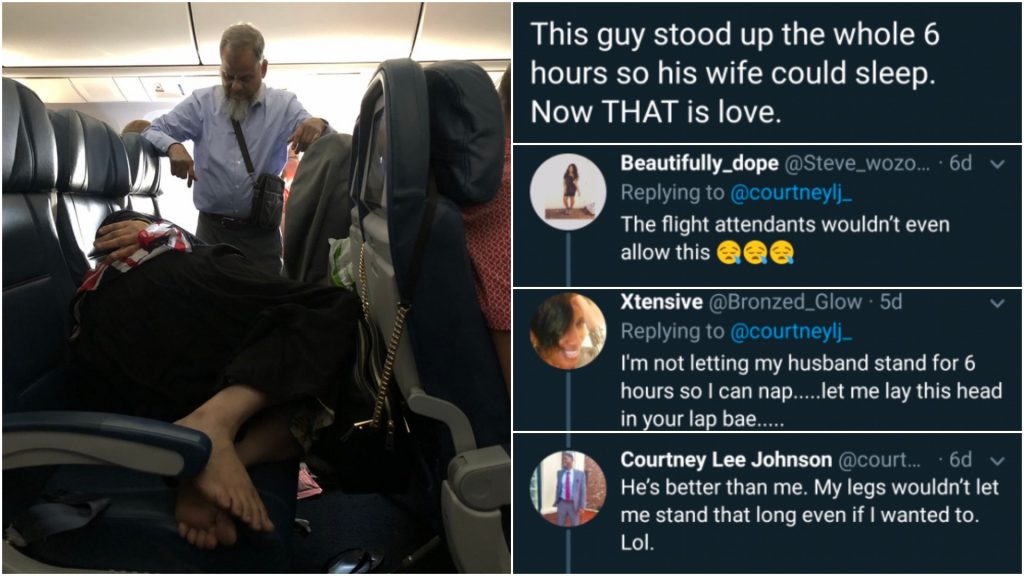 Another day, another disagreement at twitter! A man posted a picture of a man who kept standing throughout the 6 hour flight only to let his wife sleep peacefully on the plane.

This guy stood up the whole 6 hours so his wife could sleep. Now THAT is love. pic.twitter.com/Vk9clS9cCj

He captioned the picture with the details of the event and called it love, but people on the internet weren’t on the same page as him.

Many thought she could have rested her head in his lap and slept:

I'm not letting my husband stand for 6 hours so I can nap…..let me lay this head in your lap bae…..

She could have just rested her head in his lap and take turns sleeping???????? pic.twitter.com/SozoxYxeEu

Many blamed the wife for taking advantage of him:

..so who's the bad person in this relationship🙏..
The man or the woman😇
I see a woman who takes advantage of a good man and his good heart 😐

Some corrected him that it wasn’t love but rather selfishness:

That not love. That's selfishness on the woman's part. Can't she just place her head on his shoulders and sleep. Love doesn't work like that lol

Many women called her a wife they’d never wanna be:

the type of wife i never want to be

Some called it ‘man abuse’

No this is man abuse

Some were calling it slavery:

I will NOT do that. This is called slavery NOT Love.

Some were appalled at how there were 3 seats and she couldn’t even spare him one:

Wait they had three seats and she couldn't spare him one at least?

Some came forward and said how their husband would do the same but they won’t ask for it:

She couldn't just lie across HIM?! I won't judge their marriage. My hubs is the kind of man who would do this for me, but I am not the kind of wife to ask this of him! pic.twitter.com/fswsyKi52e

Some wondered what it’d be like of the roles were reversed:

Some were sure the flight attendants wouldn’t have allowed this:

The flight attendants wouldn’t even allow this 😪😪😪

I mean, it really didn’t add up:

So the flight attendant let him stand for 6 hours? pic.twitter.com/Bgj8NGuKeA

Many thought he was blatantly lying:

Lie. They don’t let you stand in the aisle for 5 minutes, let alone 6 hours. Come on man

Some shared the most iconic scene from Titanic… JACK!

People just weren’t having it at love:

Many thought how people should let go off the idea of love that involves suffering:

We need to let go of this idea of love that involves suffering.

And while many were bashing the woman and discarding the idea of calling it love, some came to her defense:

That is the ultimate love, but with a little travel experience…you know to just lay in his lap and then he can lay his head on your hips. There’s a formula lol.

Many joked about how he had spent the 6 hours planning a divorce but they were shut down savagely:

Hmmm older couple, probably have been together for decades..I think they have it figured out. Ever consider she may be terminally ill? I would stand all day if I could make my partner comfortable for just a few more hours. Hopefully if you’re are fortunate enough, you’ll know too

Some thought the man knew the very definition of selfless love:

@dovidfeldman. To give with no expectation of return. To serve, in building / demonstrating ones own love without expectation. Doesn't make you a servant. This guy seems to get it. Many don't

And many agreed on how it can make him a better man:

Some were calling him a real man:

Some were very observant:

Except she is not feeling too well, this is wickedness

Many kept on saying that it was a made up lie:

Now that is fake!!! No one is allowed to stand and block the aisle for the duration of a flight. He would have been ordered to sit or taken off the flight. Utter rubbish!!!

Some men came forward on how they would have done the same:

I could gladly do that only if she was pregnant due for labor and this flight is headed to hospital or she's unwell and very uncomfortable if none of the two conditions are met hii ni ujinga.

Some had compelling theories:

Pssh. Narrative is wrong. He went to take a leak and came back to find she had made herself more comfortable. 6 hours? Hhaybo.

Grammar nazis were at it too:

And all these people saying "laps" instead of "lap" 🤦🏾‍♂️ pic.twitter.com/l06i0Wgiqr

What do you think about this situation? Is this love? Let us know in the comments below!

7 performances which prove that Imran Ashraf is unparalleled