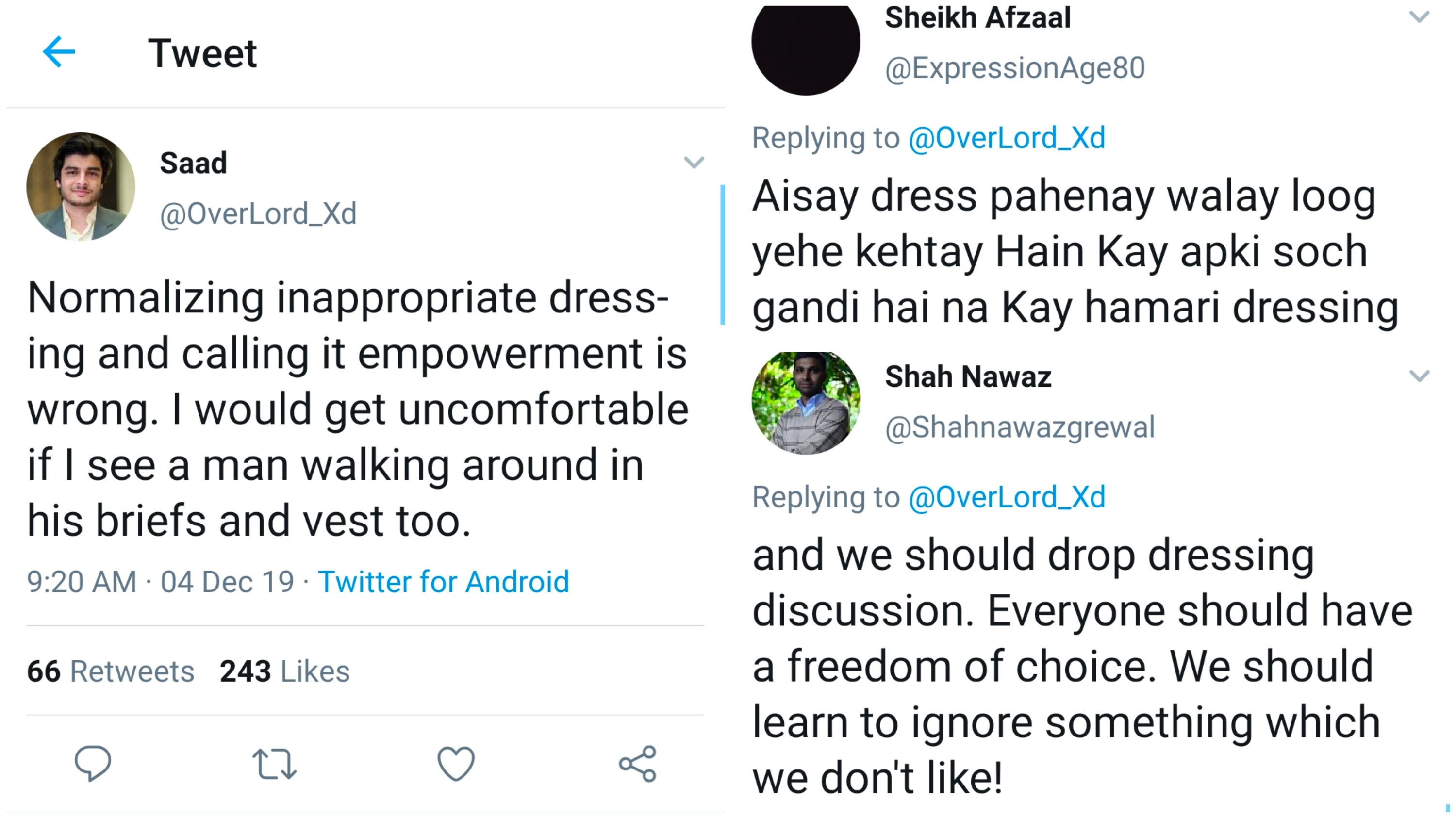 There’s almost always a debate going on at Twitter and today its about women normalizing inappropriate clothing in the name of women empowerment after a guy tweeted this out:

Normalizing inappropriate dressing and calling it empowerment is wrong. I would get uncomfortable if I see a man walking around in his briefs and vest too.

Many were keen on everyone having the freedom of what they want to wear:

and we should drop dressing discussion. Everyone should have a freedom of choice. We should learn to ignore something which we don't like!

The day men in Pakistan stop discussing how women dress or should dress up, would be the real tabdeeli. https://t.co/atxhlsEZKK

Many dared him to say this to a gori:

Bus Pakistani aurto se hi masla hai. I dare you to say this to some gori wearing such clothes. Lmao https://t.co/49FaAIrLqT

There were personal attacks!

This shows the lack of others culture knowledge and awareness you have!

Some believe that haya and behaya lie in the eyes of the beholder:

I strongly believe in haya and behayai being in the eyes of the beholder.

Many were sharing how they’d deal with the situation:

If I feel uncomfortable because of what someone is wearing I would look away, not abuse them. https://t.co/ymEKjIgssj

Some wanted to stop normalising crimes:

Normalising men committing crimes is worse than blaming women and their clothes. pic.twitter.com/1tgQxcRq5h

Many were of the opinion to look away if they didn’t like what others were wearing:

Many were sharing what women face on a daily basis:

In case it escaped your notice that is not what we call empowerment. What you're describing is literally men's underwear and I've seen that in public more times than i can count. While you guys blanch at the sight of a strap of our bra. https://t.co/Jvs8xitEmF

Some were appalled at the comparison:

Many thought it was a common sight already:

Summer in Lahore are marked with shirtless men/men in vests splashing around in the stream that flows through the city.

Some were up for a fair comparison:

Some advised him to lower his gaze if he had a problem:

You would get uncomfortable because you're homophobic. Women are supposed to dress anyway they want, so keep your gaze lower, bro. https://t.co/UzKVpt1GzO

ignore and walk away beta, Its not that hard https://t.co/VVM16AdStd

Many called him out on commenting on women being a man:

Why don't you work on upliftment of Male Community, women will do their part. I don't think it's appropriate to comment on women being a man. https://t.co/uSVafhhKBA

Just saw a man holding and massaging his penis in shalwar looking at school girls, while driving back home.

I ignored this tweet earlier today but came back and just wanted to send Lanat on your lanti face, soch and folks who raised you as the lanti dalla as you are. https://t.co/7j6TVh4YU9

Some were of the opinion that both men and women should be educated on appropriate behaviour:

Agree. Both men and women needs to be be educated. #womenempowerment https://t.co/PEl0HBYtCT

Some were defending him:

And in the end, came an explanation:

There is nothing wrong with wearing what you want but recently people have stopped knowing the difference between appropriate dressing for appropriate occasions due to this. You cant wear your pajamas to an interview and you can't wear a three piece suit to bed. https://t.co/zYod9sSjQu

What do you think about this tweet? Let us know in the comments below!