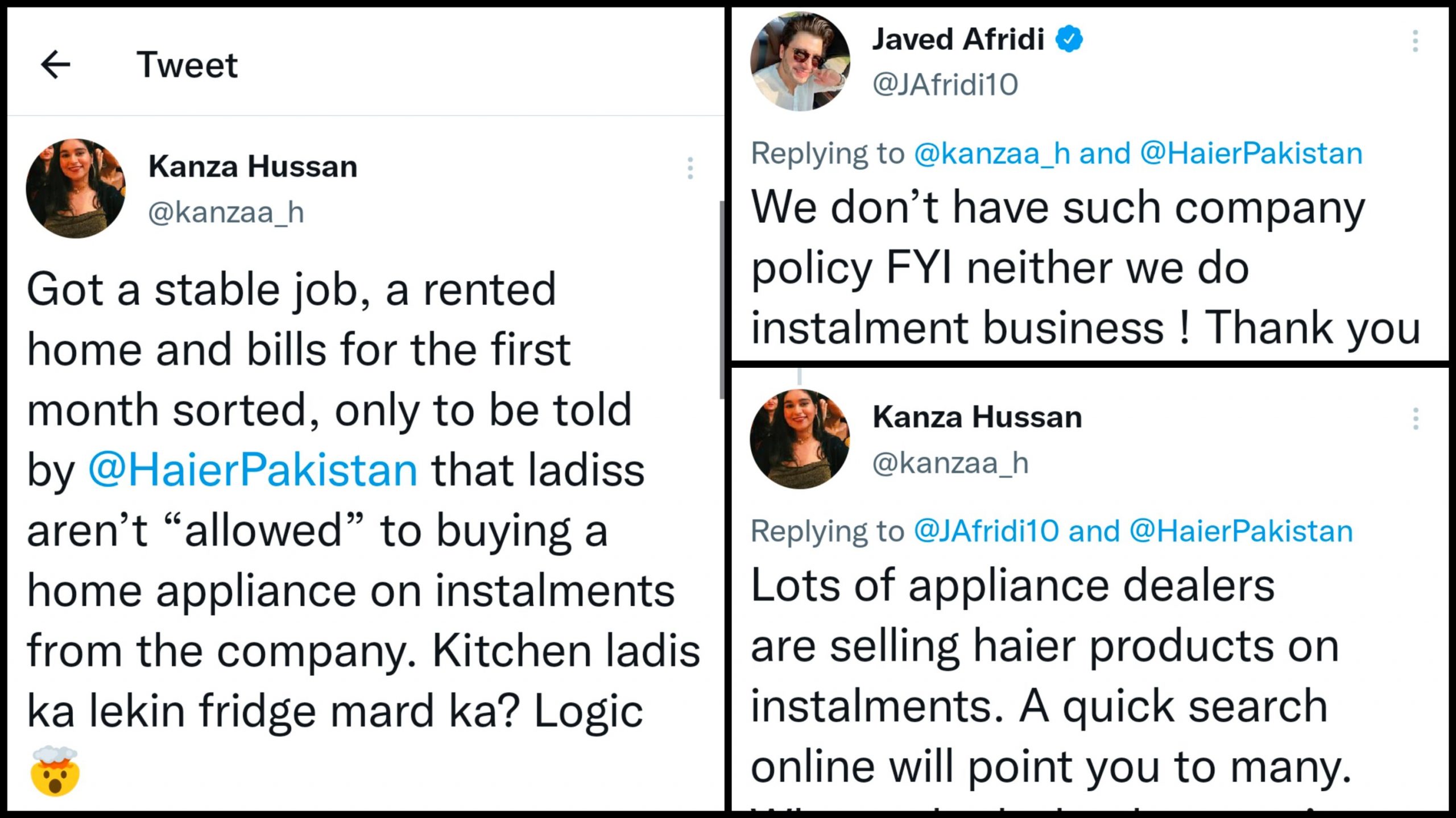 A girl shared her experience to twitter of how she went to buy a kitchen appliance on instalments but the shopkeeper blatantly refused her saying that the company in question, Haier, doesn’t have the policy to facilitate women.

Got a stable job, a rented home and bills for the first month sorted, only to be told by @HaierPakistan that ladiss aren’t “allowed” to buying a home appliance on instalments from the company. Kitchen ladis ka lekin fridge mard ka? Logic 🤯

The tweet also reached Javed Afridi, the CEO of Haier, who clarified on twitter that the company does not have any such policy and neither do they allow buying on instalments:

We don’t have such company policy FYI neither we do instalment business ! Thank you

Another girl came forward and shared how she faced the same gender discrimination at the hands of Haier:

A man on Twitter also shared his mum’s experience which was pretty much the same:

Same thing happened with my mom, she has been a govt servant for 30 years but couldnt get a washing machine on installments. Pathetic.

Some shared how they too faced the same situation where the dealer refused:

The dealer dealing with us was refusing to accept it's because we were women. Ugh.

Not true. I’ve bought multiple things from Haier. May be it’s shop owner’s/manager own policy but Haier doesn’t has any such policy

This is awful and shameful, @HaierPakistan, not to forget also illegal and unconstitutional. Who's your legal advisor? https://t.co/PCg4bKWsqc

People didn’t quite get the logic!

What kind of logic is this? How can this be based on gender and not proof of income? https://t.co/h0iaXqr6rn

Is this true? If so, please change your policy. @JAfridi10 @HaierPakistan https://t.co/hApeHcAcWd

This is discrimination and against constitutional guarantee of equality @HaierPakistan ! How can this be a policy of a company? @GovtofPakistan We won’t accept this outrageous craziness! https://t.co/aBtxvO8otz

People were so done with the discrimination:

every day i read about how hard it is to survive in this shithole of a country without a man and my urge to move out keeps growing 🤩 https://t.co/pwNpNVOFfo

It's so fucked up. Same with Dawlence. The explanation provided was that a lot of rich men purchase these appliances in their wives names since they're housewives and they are exempted from tax. "Yeh bohot bara scam hai aaj kal." https://t.co/ANDSTSiYuS

This is the most stupidest thing I have ever heard

While others were appalled, some had the dealer to blame rather than the company:

Difference between a company and dealers who are retailing the company products. About time, we grow up and stop blaming/defaming the company for the lies told by dealers.

PS: The tweet should have been cleared out after Javed Afridi's response. https://t.co/S9yfVuaRux

@HaierPakistan doesn't sell appliances on installments. It's the dealership/shop owner and their policies. Like you don't blame Toyota when bank doesn't approve a loan. https://t.co/S71WN8Iu8y

He should ask someone to do communications on his behalf. The tone and vibe is apparently rude.

People found it to be unprofessional:

What a response. Instead of trying to be helpful and properly looking into the matter, you tell her off like an annoyed school principal. How professional.

People found the response to be shameful:

This? This is your response??
Instead of checking with the store and firing your disgusting employees,your response is to lecture the female customer instead?
What a shame.

What do you think? Let us know in the comments below!