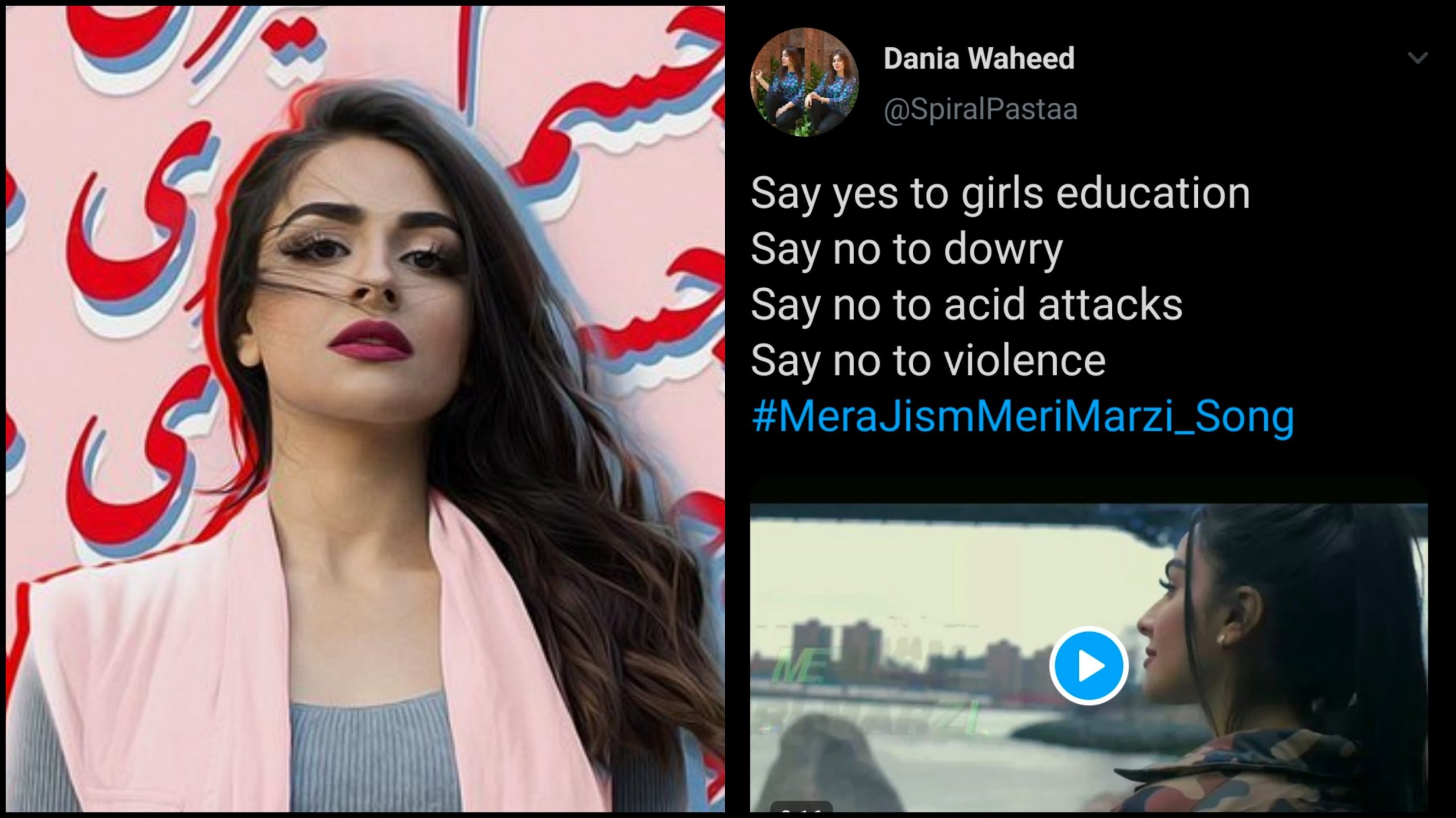 And the internet fell in love with the song!

People were loving how the song highlights major issues faced by women:

So this song is all about highlighting the real issues in our country about child rape, acid attacks and all these issues so that's why aurat march was important.#MeraJismMeriMarzi_Song pic.twitter.com/UrNj5or776

Many were sharing their favourite lyrics:

A very powerful one indeed:

People were calling it a perfect representation of women empowerment:

So guys here we go guys listen this song because this song is the perfect example of women empowerment.#MeraJismMeriMarzi_Song pic.twitter.com/6ffuCvOhcE

Say yes to girls education
Say no to dowry
Say no to acid attacks
Say no to violence#MeraJismMeriMarzi_Song pic.twitter.com/sDeowrZLOc

There are more than 1000 honor killings of women in Pakistan#MeraJismMeriMarzi_Song pic.twitter.com/JWNoTzZZ0E

The basis of #MeraJismMeriMarzi_Song isnt to cause riots and differences between the gender but it's to mark the importance of a woman as an individual. pic.twitter.com/ILikvDiwIf

People were all praise for the way she highlighted the issues:

An alarming one indeed:

Women get raped and every yeat alot of girls are killing without any reason this is alarming situation.@Amfifi_ sang a beautiful song for women empowerment. #MeraJismMeriMarzi_Song pic.twitter.com/ARsPIp4C4x

This needs to stop!

Patriarchy is so deep rooted in our culture that any woman who chooses to stand up for her rights is shamed by a majority of people.She is considered ‘immoral’ & ‘Westernized’ bent on destroying the ‘pious’ culture of the region. This needs to stop! #MeraJismMeriMarzi_Song pic.twitter.com/hS2cSrfgYj

Tweeps were sharing that women still not getting their rights is a bitter reality:

We live in 21st century yet still our women aren't empowered, that's a bitter reality.#MeraJismMeriMarzi_Song

People were proud of Sophia for the song:

Many were urging others to stand up for the weaker ones:

Child marriage isnt the answer!
Stand up for the younger ones in vain.#MeraJismMeriMarzi_Song pic.twitter.com/dOo0lhgKhV

People were lauding her efforts:

Many were sharing how she totally nailed it!

dannnngggg, girl you just nailed it. such a bangerrr!!
keep rockin

U nailed it. Excellent work girl

Many thought it was a much needed song:

A much needed song. So happy to hear it. 😎

Sunday night I sat there on my sofa watching the Aurat March, I was so inspired by all the woman that had showed up to voice their frustrations about all of the things they would like to see change in their society regarding women.

I could tell there was a gap in understanding.

One person said “What are you woman marching for when Islam has given you all the rights as woman..”

She responded “ I never said Islam didn’t give us these rights, we are saying that the people who claim to follow Islam are the same culprits of oppression.”

I saw woman holding banners with Qandeel Baloch’s picture on it, which symbolizes honor killings.

I saw woman holding banners showing the statistics of Gender Wage Gap in Pakistan, (which is the highest in the world)

I saw banners asking for end to child marriages and forced marriages.

I saw woman coming together collectively asking for their rights. Rights that have been given to them by their religion but taken away by society.

So I wrote a song to sum it all up

Do you like the song and the ideology behind it? Let us know in the comments below!

Lahore food VS Karachi food: The debate is on!