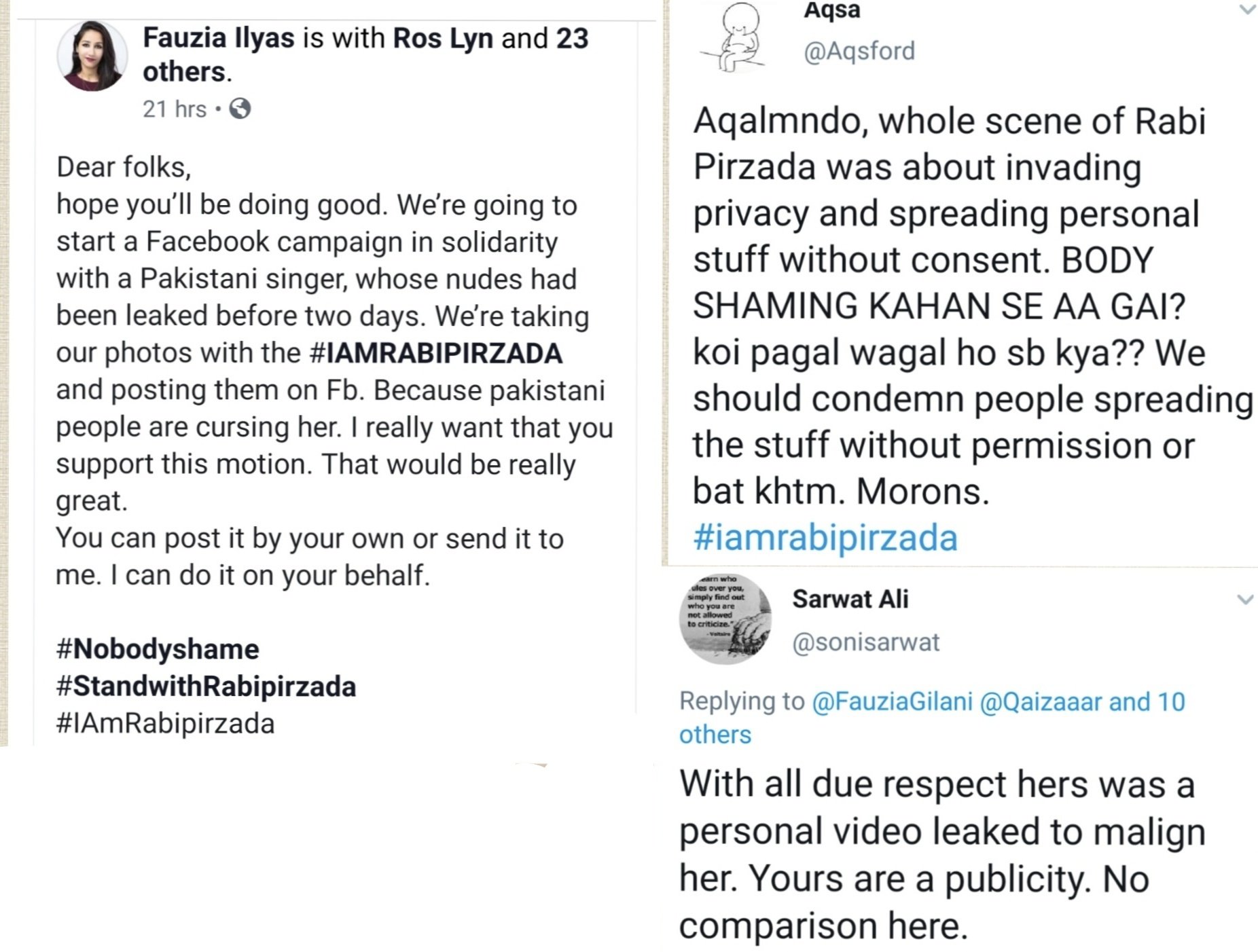 As private pictures and videos of Rabi Pirzada surfaced the internet, many stood by her side calling out the culprits for breach of privacy. And while the internet was all for standing in solidarity with Rabi Pirzada, a girl named Fauzia Ilyas took things in a whole different direction: 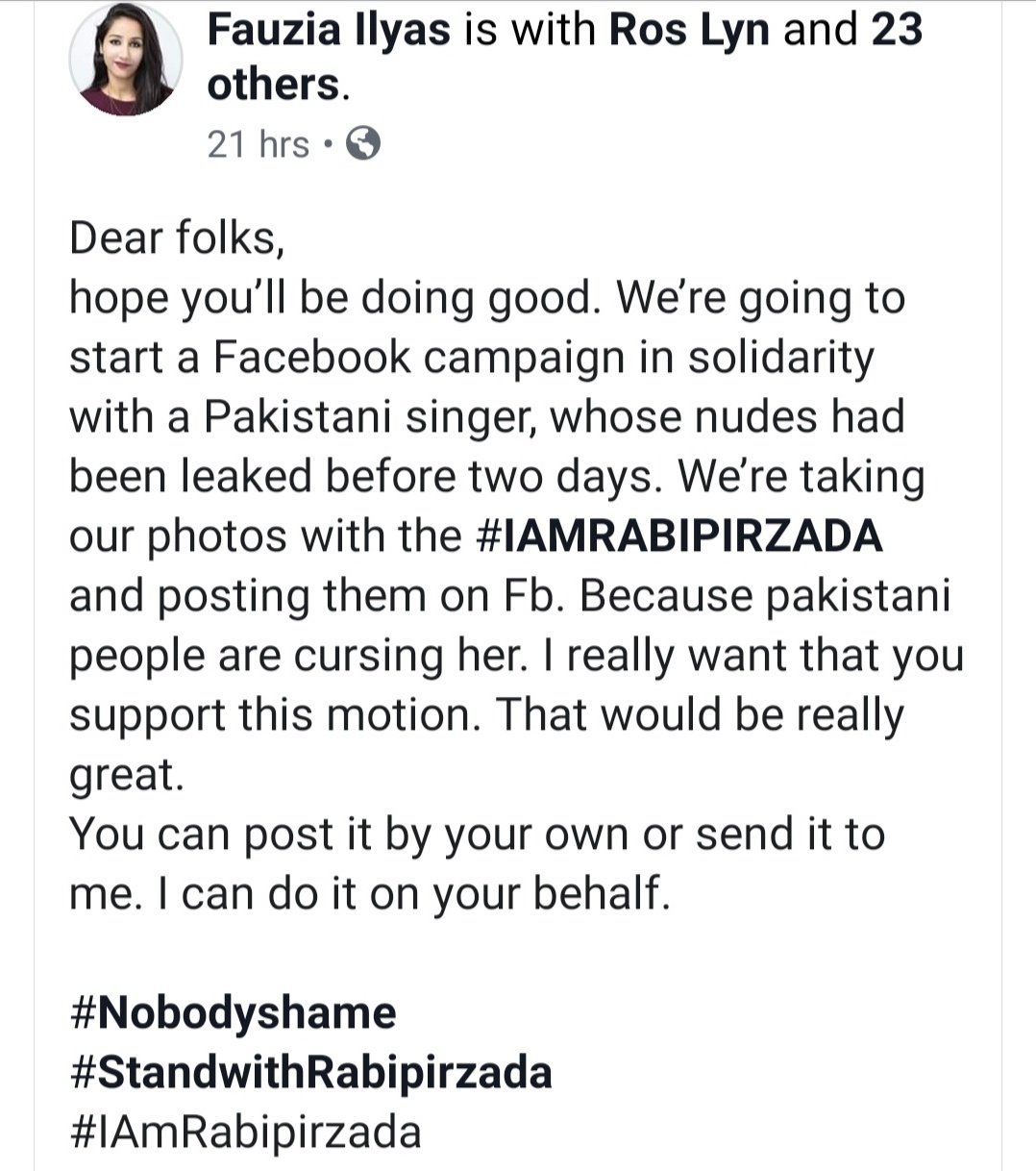 In a post on Facebook, Fauzia urged other women to come forward and share their nudes with the hashtag #IAmRabiPirzada and she began by uploading hers.

There’s nothing to be ashamed on your body.I don’t understand why always more & more women get bullied just because of their body.
Rabi Pirzada done nothing wrong. Its her life. It’s her choice. Shame on those whose cursing her. #IAmRabiPirzada#Nobodyshame#WestandwithRabi pic.twitter.com/kRuwpTy7oY

According to Fauzia’s logic, it’s the nudity that offends people and honestly, we’re trying to find logic here. Fauzia also added the hashtag #NoBodyShaming and somehow turned it all about body shaming, closing her eyes to the real issue which remains breach of privacy.

And the internet was just not having it! The hashtag #IAmRabiPirzada was a top trend ever since her Facebook post: 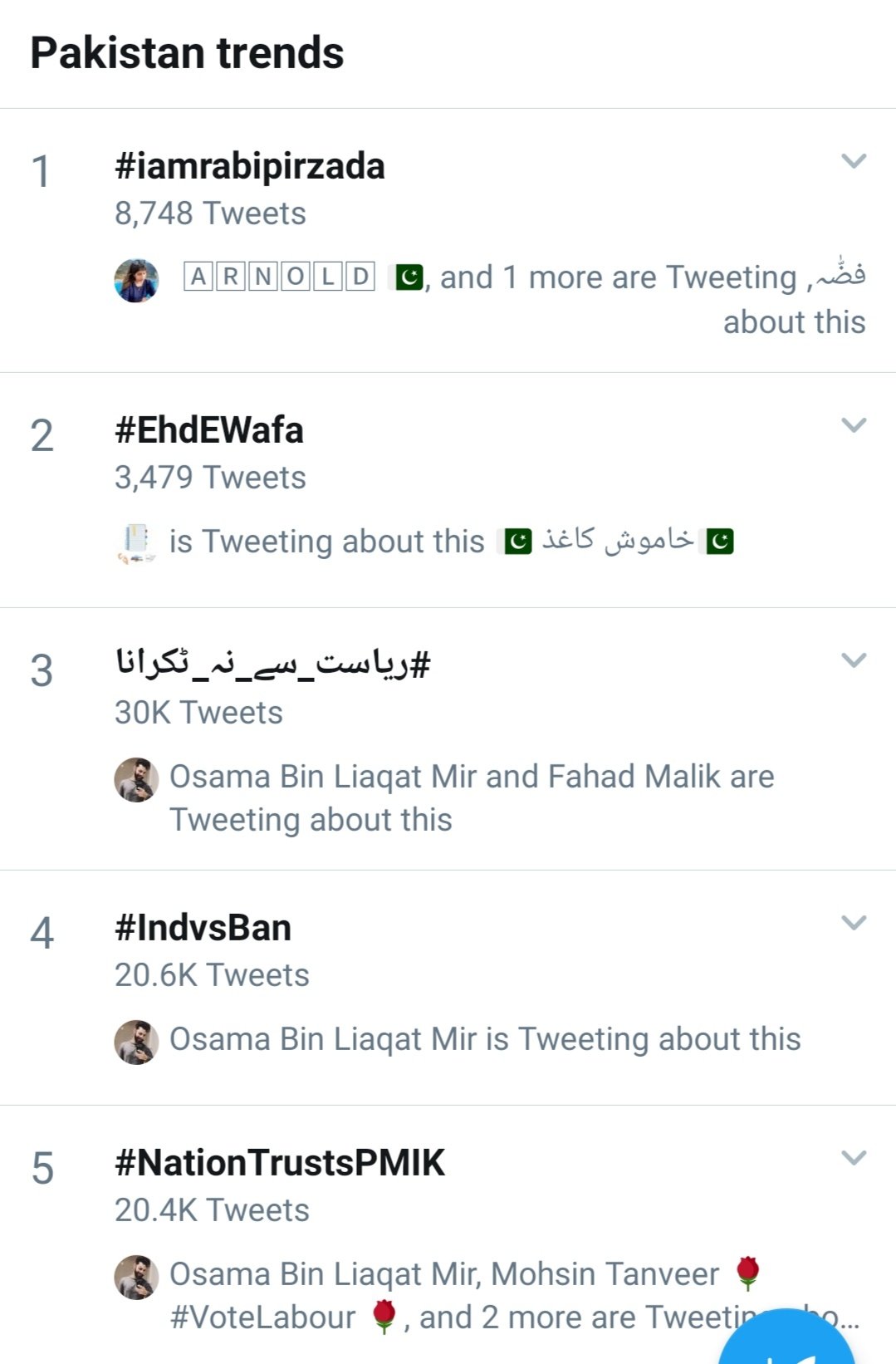 And the internet was going nuts!

And this is the shittiest way supporting her.

People were calling her out:

With all due respect hers was a personal video leaked to malign her. Yours are a publicity. No comparison here.

Some thought it was entertainment for the desperate lot out there:

#IAmRabiPirzada
This trend is nothing but more entertainment to the desperate people
there is no other point of it
yes i agree that whatever she did was her own business lekn jo jahil aik bar ksi ki pictures ka low level mzak bna skte hain unko or pictures se sabit kya krna hai?

People told her how there are sever other ways to stand in solidarity:

there are several other ways to convey the message bro, you are just filling the cup for thirsty beasts lurking about twitter !

People were not okay with normalizing nudity in the name of solidarity:

The girl who started #iamrabipirzada by posting nudes, she’s an atheist, runs atheists organisation also has blasphemy charges. I feel ashamed for being part of the society where ppl are following this trend. This campaign will do nothing but normalise nudity. We’re a lost nation

Many agreed how the idea was simply stupid: 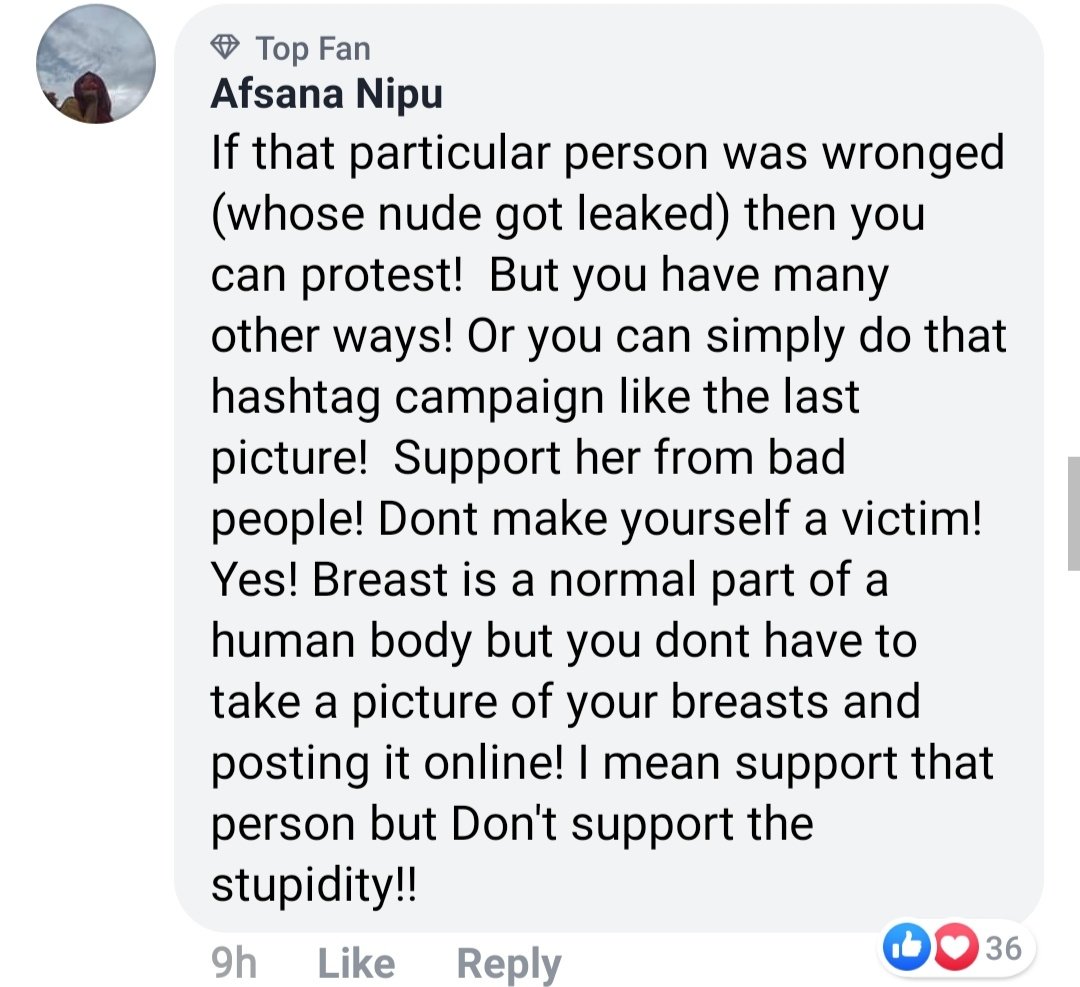 Fighting for privacy by exposing your own is never the right way:

People reminded her what the real issue was:

Rabi pirzada DID NOT want her videos to leak, DID NOT want everyone to see her. She wanted her privacy to be gaurded. And guess how are ppl supporting her? By posting their own nudes publicly and turning it into 'Be proud of your body' campaign. Lmao, 4th most intelligent nation!

And that it wasn’t in any way related to body shaming:

A moment of silence for all those people who are posting their nudes under #IamRabiPirzada to show her their support by making this whole thing about body shaming. 🤦🏻‍♀️🤦🏻‍♀️🤦🏻‍♀️ pic.twitter.com/DtW7tITJrB

Some were of the opinion that this was more of a #CheckOutMyBody campaign:

All the tharkis on the internet were having a ball:

Many were convinced that it was time to leave the planet:

Others compared it to that of being murdering yourself to support the murdered: 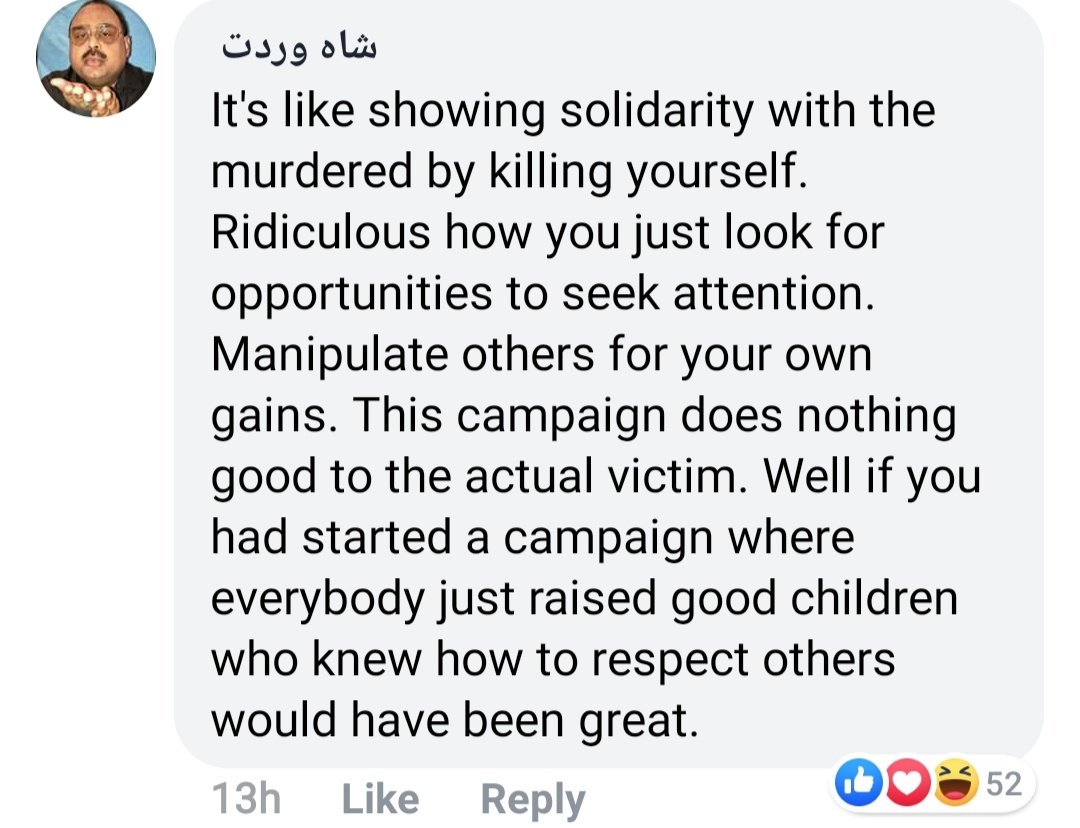 Some told others how posting pictures of their own was making matters worse:

All the liberals uploading their bold pictures with caption #iamrabipirzada #SaveaSoul . You are making it even more worse.

Some thought she had an agenda:

Actually, Fauzia is trying to make female nudity a normal thing in Pakistan, which is normal in other parts of the world.. #iamrabipirzada

These desi tweets on Desi Halloween are way too funny!