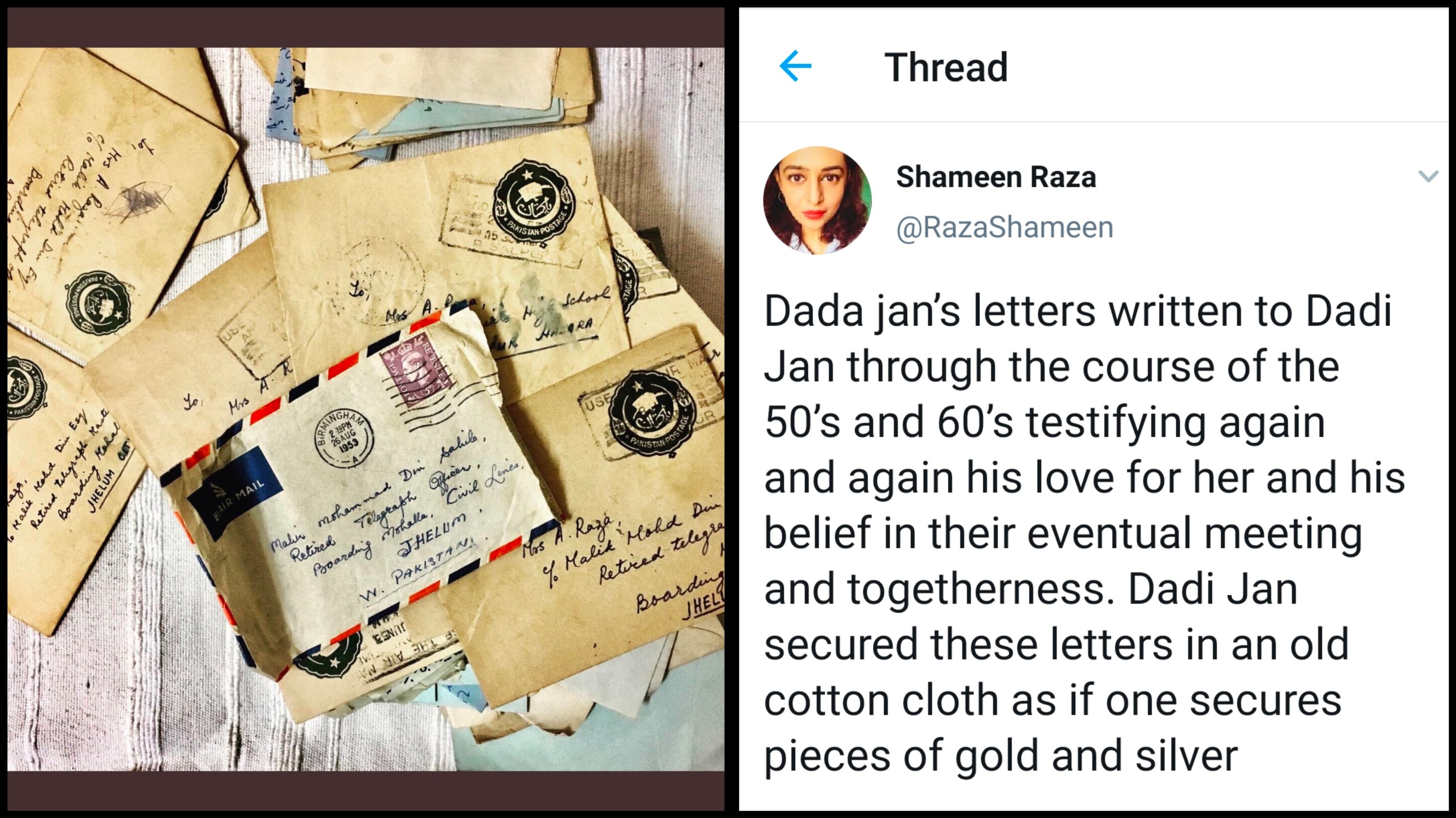 Every now and then we find tales of true and everlasting love, Taj Mahal being one of the greatest examples. And amidst the daily hustle and bustle in your life, these letters from 50’s and 60’s will rekindle the old school love in you!

Dada jan’s letters written to Dadi Jan through the course of the 50’s and 60’s testifying again and again his love for her and his belief in their eventual meeting and togetherness. Dadi Jan secured these letters in an old cotton cloth as if one secures pieces of gold and silver pic.twitter.com/dURca4iuRK

A girl who goes by the name Shameen Raza took to Twitter to share her dadi’s most prized possession – the letters here dada had written to her expressing his love for her and she deems these letters as timeless:

How wonderful it is to be part of a love story like this. It makes you feel timeless, much like their love

The letters had the internet reminiscing of the good old times, before it was corrupted by technology:

Such a beautiful handwriting❤️ Technology has ruined these beautiful traditional ways of expressions.

Director, Jami, pictured an actual film in those letters:

Thats a film right there

Shameen also shared a glimpse into her dada’s letters:

For the ones who’ve been asking for a glimpse of them – they end lyrically in my grandfather’s pure Urdu. ‘Yours, Raza’ they say. Their love story requires a separate piece, one which my father and I are planning to work on over the weekends pic.twitter.com/HETJwpWjTZ

It had some realize that they were born in the wrong era:

Stories like these make me feel like I was born in the wrong era. People would write and post letters, wait for them to reach, and for their loved one to reply.. Yet their feelings wouldnt die
Nowadays with whatsapp ppl still dont make time for you. 'Long distance' is an excuse https://t.co/1TRgQPb7Ms

We’re all for reviving this trend:

When I say about reviving the trend of hand written letters I'm referring to stuff like that.
It becomes the part of someone's existence, eternally pure right from the heart without using any backspaces. https://t.co/Tog7PNZTLu

Never in a hundred years!

There’s something about letters. Nothing gets lost in translation. They seem pure regardless of what they are about.

Many shared stories of their own grandparents:

I got a handful of letter written by my grandparents.(Didn't read it) but each one of them were token of love and emotion. And they used live 30KM apart, which is equal to daily work commute distance. https://t.co/t24V0DalGD

And people were astonished at how technology had taken away from their writing skills:

I agreed. Take smartphone from me and i my writing and vocabulary skills would stand as exposed. 😭😭

A girl shared how her mother had kept her father’s letters, pictures and recordings too:

My mother has kept my abba’s letters, pictures and recordings the same way. They were apart from each other for 5 years after getting married and he would send her cassettes of all the love songs & ghazals. May lord keep them together forever. ☺️

Many shared how people in their own lives had letters like these saved up:

This is precious ❤️
My mother also has a bundle of letters, which she received from papa while he was posten in Karachi and she was in Narowal.

Also, I can read civil lines, Jhelum. My hometown! https://t.co/t6U9c0X1uT

People were mesmerized by the writing 😍

Wah , such a beautiful handwriting

So heartwarming and what a beautiful handwriting ❤

It had people thinking of the earlier ways of communication:

I can smell these letters..
Sigh.. Beautiful ❤️

Hand written letters are everything!

My life used to revolve around hand written letters once https://t.co/ogj3KtI1Hf

People were thanking her for sharing something so sweet:

Thank you for sharing this ❤️

The letters are irreplaceable!

That old good days &gem people ❤ For us, its just old dusty papers with alphabets over it. But for your grandmother, its a long life encapsulated in few words over a paper. For her, it wil b more precious than gold &diamond, as nothing can b substitute of human feelings.

It left people craving for more:

Now I am too interested in their love story to back off…can you share a few lines from any of these letters?

We would too, magar wohi gham, likhein kisko 😭

Romanticism of letter writing aside.

If opportunity presents itself, I’d definitely write letters. But unfortunately, I don’t have anyone to send them to or receive from. https://t.co/MB09zfkzey

Aren’t these letters the best thing you’ve seen on the internet today? Let us know in the comments below!

The latest epsidoe of ‘Meray Paas Tum Ho’ has moved people and we’re not surprised!