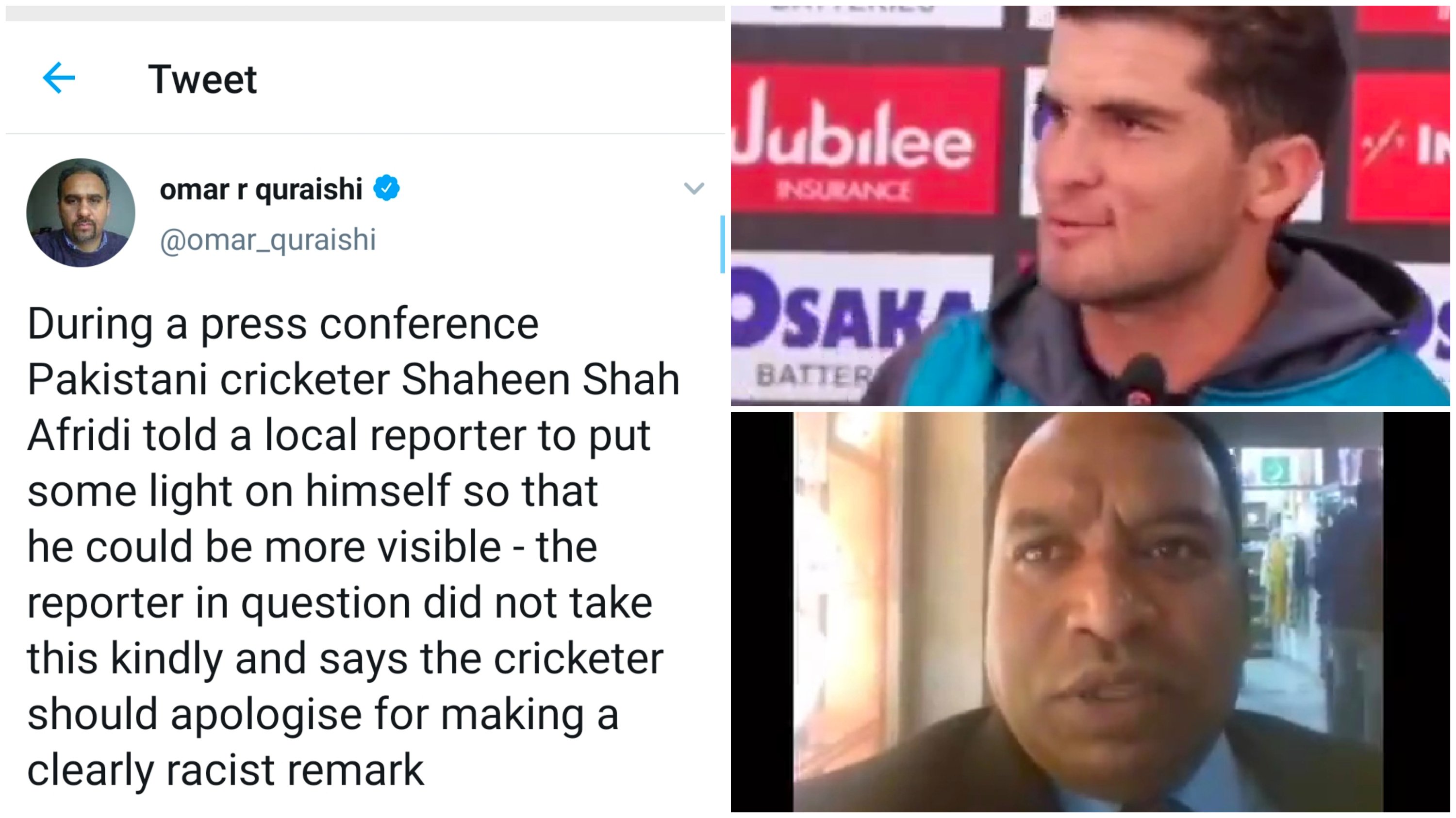 Shaheen Afridi is one heck of a gem in the squad, but the cricketer has been under fire for his racist remarks to a journalist:

During a press conference Pakistani cricketer Shaheen Shah Afridi told a local reporter to put some light on himself so that he could be more visible – the reporter in question did not take this kindly and says the cricketer should apologise for making a clearly racist remark pic.twitter.com/PrYe2qkFw8

The journalist, Asghar Ali Mubarak, made a video demanding a public and a verbal apology from Shaheen Afridi for the racist remarks made. And the internet has a lot to say!

this is bullshit.. i was the complete clip.. it was just a funny reply on how the man got shaheen's attention by saying SHAHEEN ME APKY SAMNE HN AP MJHE DAIKH SKTY HAIN.. there was nothing racist in that moment.. shaheen just replied in a humourous way.

Many were calling out the journalist of using the racial slur himself:

Dude said he looked a little like "Negroes". How is he complaining of racism?

The sports reporter is calling out Shaheen for his alleged racism towards him and in the same breath he calls Blacks what? Yes, Negros lol. https://t.co/evBNxACZch

Some were calling it ‘uncalled negativity:’

Just to remind you all he was called a "Buffoon" by Mike Artherton, was he not even educated.Our senior here likes such kind of publicity.He was the one who called Dickwella,
D Silva. And he was so happy on this blunder. Please don't spread un called negativity for our cricketers

Thats very bad. Unfortunately we make racist remarks without even realizing what we are saying is crossing red lines. https://t.co/sF9TIOagFr

As much as I love Shaheen, what he did there is unacceptable! He should be disciplined. https://t.co/1gKsUHU4DZ

If true ! Shame on this third class shaheen Afridi . How can he be racist like that ? https://t.co/do1Pxn63SF

I stand with the reporter. Shaheen did pass a derogatory racist slur snubbing the interlocutor. It's sort of our national attitude. We love to tone down dissent by ridiculing. I wonder if Shaheen even knows what racism is. https://t.co/gcJS9lAxmv

Some suggested that PCB should start offering a course in ethics as well:

Cricketers should be taught a course in " etiquettes", they clearly lack that and that is partly responsible for their dismal performance too

PCB now needs a coach for ethics too. https://t.co/PcfOF8wJvf

People were tagging PCB to look into the matter:

Many were accusing the journalist a ‘controversy seeker:’

This "journalist" is serial controversy seeker. The same guy who asked Sri Lankan batsman Dikwela will he score a century next day? He was told by the batsman that he is Out already. Also he sued an English cricketer Michael Atherton for calling him "Buffoon". https://t.co/SYpUnxwbTf

Just to remind you all he was called a "Buffoon" by Mike Artherton, was he not even educated.Our senior here likes such kind of publicity.He was the one who called Dickwella,
D Silva. And he was so happy on this blunder. Please don't spread un called negativity for our cricketers

Some shared how they had actually seen the entire presser and that the clip was taken out of context:

Out of context.I saw the whole presser it was not like that

This is absolutely rubbish @omar_quraishi I was there and nothing was said in racist manner. Please stop fueling unnecessary criticism. Don't just tweet edited video for your own gains. @iShaheenAfridi We stand with him and @TheRealPCB This allegation is absolutely garbage. https://t.co/TbTp16Cy37

Some didn’t find anything wrong:

Ma man is angry and lookin’ for some clout. https://t.co/Kj6WkQQXfN

What do you think about the video? Let us know in the comments below!

5 OSTs we're loving at the moment!

Diva 2019 Round-Up: Fashion Designers Who Showcased the Best This Year