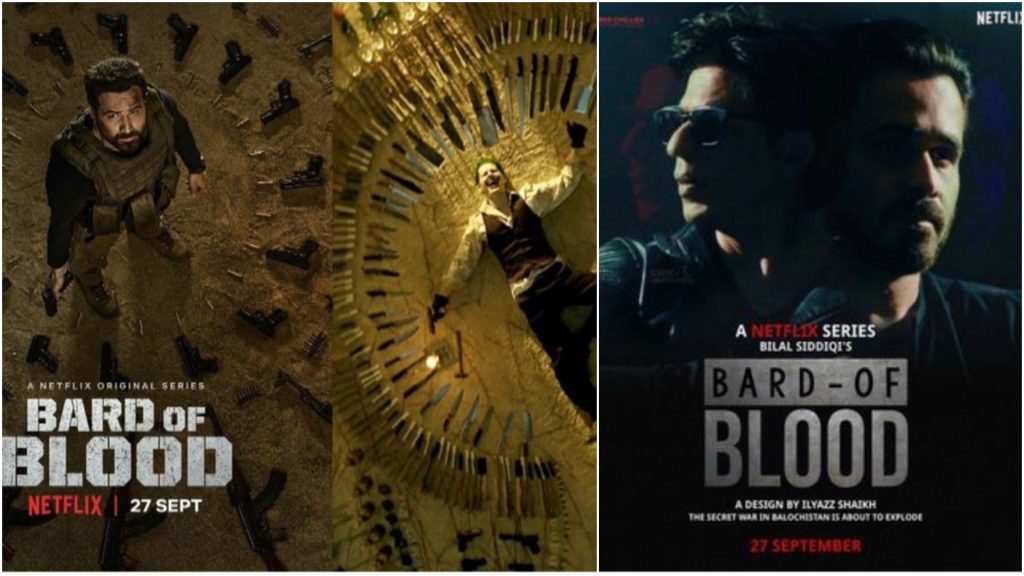 Amidst the tensions between India and Pakistan regarding Kashmir, Shahrukh Khan, in collaboration with Netflix India thought it was a good time to cash on the political tensions with his series called Bard of Blood.

The trailer portrays Muslims as terrorists, something that Bollywood has been doing for decades. The series is based off of the book The Bard of Blood written by Bilal Siddiqi:

My first book – #TheBardOfBlood is going to be a @netflix series soon. This would not have been possible without Mr @_GauravVerma . Yes, that is the founder & CEO of Netflix – Mr @reedhastings . And then of course, there’s the man who has inspired millions like me – @iamsrk sir! pic.twitter.com/HEEXR43bGe

As soon as the trailer was shared, it was trending on number 2 on Twitter in Pakistan: 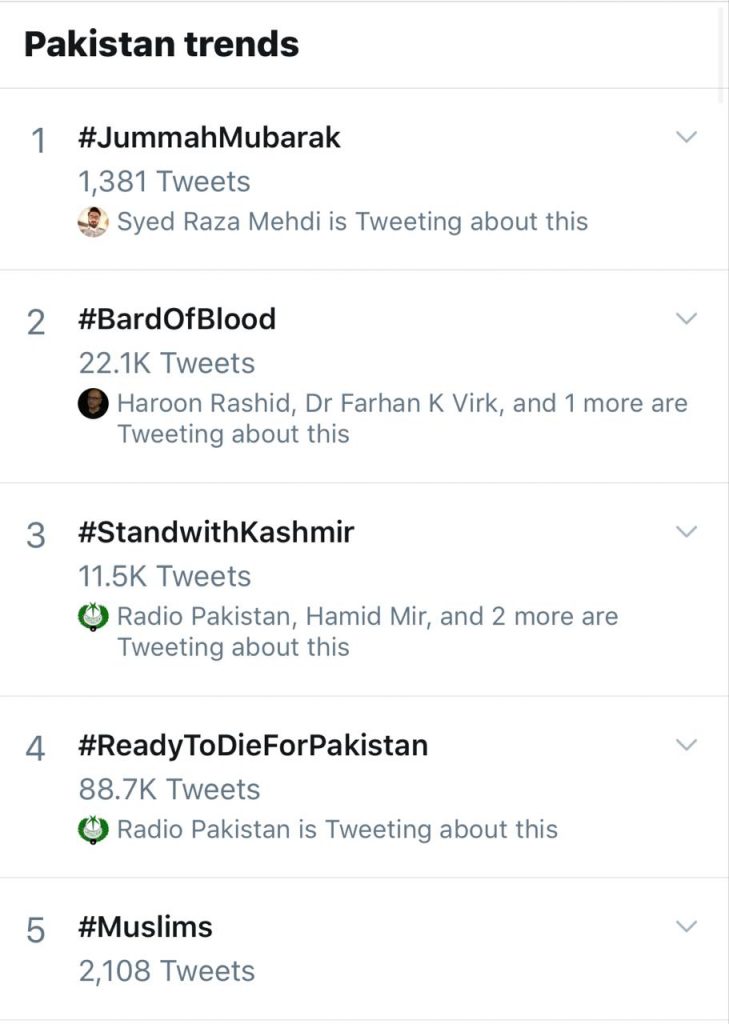 And people were absolutely livid!

sigh. you would think that in a time of such hostile uncertainty, artists would have the sense to demand & demonstrate peace. if all we preach is hate & war through our media & politics, what chance does real life have to foster love & harmony? https://t.co/2SjaGH5kJb

Many were calling him out on cashing on the stereotypes:

A country whose majority of movies depict Muslims as terrorists – another feather in their cap? Cashing in on typical stereo types, sorry to say https://t.co/gjXQwmvBOL

The most disappointing bit was this series coming from Muslims themselves:

This indeed is the very issue that Mehwish Hayat has been fighting for:

#BardOfBlood is exactly what @MehwishHayat has been talking about recently. It's a shame that it's coming from someone like SRK and Emraan Hashmi. When will we stop stereotyping Muslims?

Some called the actors dumb for taking up the series:

Wow Wow Wow!
Mister Khan you are showing the true face of Muslims.

Bollywood will always make Anti-Muslims Movies and the funniest….
Oh! The saddest thing is that they use Muslims to promote the hate for Muslims.
But Muslim Actors in Bollywood are dumb.#BardOfBlood https://t.co/z3ncJVCQaa

What is with Bollywood’s obsession with portraying Pakistan to be this one big evil terorrist hub in a desert?? Emran Hashmi and Shahrukh Khan are willing to vilify Muslims across the border just so they can prove their patriotism to avoid getting hate. Trash. https://t.co/Wlo9qwKsgt

Some suggested they make a series on real events:

Please make series on real events.
1. When your RAW agent (Kalbhushan) was spreading terrorism and then got caught by ISI.
2. When your pilot Abhinandan savagely beaten by locals after Pakistan shoots down indian jet. #BardOfBlood https://t.co/d97aO7Opyx

Many thanked Quaid-e-Azam for Pakistan:

Thank u Quaid e Azam for Pakistan. Today coward Muslim like @iamsrk who love his money & fame have attempted to prove he is real hindu loving Indian by producing #BardOfBlood and we here in Pak land lives with full freedom without covering up genocide of Kashmiri Muslims. Thanks https://t.co/dYc82USM9H

Respect has left the chat:

I have always respected you and expected you to use your huge influence and celebrity power to bring peace and love between Pakistan & India. This will only spread more hatred & will create a false image of Pakistan and Muslims. Sad. Disappointing.

Even a few fellow Indians thought this was ill-timed:

If this is a religious spun show, please take note its ill timed! Right now to the world, with 7 + million in isolation, the world is watching yours truly as the bad guys!

Man got tired of romancing girls his daughters’ age only for the film to flop, so decided to create this nonsense to cash in on the tensions – smh money really has no religion https://t.co/zVu9i8WHX9

Netflix went from Breaking Bad and Prison Break to Bard of Blood by Imran Hashmi, a guy who's career ended in Bollywood 10 years ago. The decline is fucking real. Can't wait to see relating another series to Pakistan and ISI and calling all Muslims terrorists. https://t.co/iBqozelm8o

People were questioning if these Muslim actors had no other work:

So these so called Muslims, "Shahrukh khan and Emran Hashmi" are now in a movie that is totally against the Muslims. Don't they have any other content to work on rather than this? #BardOfBlood

Some thought it was a part of propoganda:

Worst part about this is that two Muslims,SRK and Emraan Hashmi,are willing to portray us in such a manner. Think of the propaganda you’re selling and how this will effect Indian Muslims in your own country. Oh and they will never see you as one of their own. https://t.co/LNwHj1fO9t

People wanted the Veer-Zara SRK back:

….as if we haven’t seen a series like this a million times before. Bring back the Veer-Zaara SRK.

Am I allowed to snigger a little at SRK fangirls and boys who were propping him up as the ideal silent bystander on Kashmir? If his utterly trashy film choices hadn’t woken you up yet to the fact that he only cares about big money & commercial success, then perhaps this will. https://t.co/YLpcNRcAli

Some took a dig at their content only running when based on Paksitan:

So shahrukh has produced this netflix tv series call 'Bard of Blood' which features imran hahsmi in the lead. Not to forget this is another Anti-pakistan content after sacred games, so far.

I know you people can make your content hit by only defaming pakistan in your films.

Many were calling this out as an attempt to prove loyalty to India:

This is exactly what irresponsible content looks like. Netflix India are really cashing in on the current political tensions. Not only is this trailer showing Pakistan in an unrealistic and negative light but is also misinforming national and international audiences. https://t.co/qu5XbPXBs5

Some didn’t even find the trailer to be all that good:

Not only is the Bard of Blood trailer an indication of how Pakistan continues to be stereotyped, but the trailer itself is also crap. Poor acting, mediocre visuals and a cookie-cutter premise with a storyline anyone can see coming from a mile away.

Many thought Shahrukh Khan did this to be in good books:

SRK has always been criticized by BJP political leaders and is claimed to be a Pro-Pakistani which got him into some sort of trouble and effected his movies and stardom.
So he comes up with this stupid web series #BardOfBlood produced by his production house.
Get a life yaar

What is with bollywood’s obsession with making propaganda movies against Pakistan. Aren’t they tired of the same old narrative? Isn’t it about time to stop spewing hatred using your media. Bollywood’s been cancelled https://t.co/zWC7uZTnSD

Wow Wow Wow!
Mister Khan you are showing the true face of Muslims.

Bollywood will always make Anti-Muslims Movies and the funniest….
Oh! The saddest thing is that they use Muslims to promote the hate for Muslims.
But Muslim Actors in Bollywood are dumb.#BardOfBlood https://t.co/z3ncJVCQaa

Please! Find something better to do man:

#BardOfBlood proves it that India needs to move on from all things Pakistan.

Get a grip and focus on your own stories, Mahabharat no more relevant?

Many were popping the bubble that some Indians live in via their movies:

How Indians think they rescue their terrorists/Agents operating in Pakistan's Balochistan vs how they actually try to rescue them. #BardOfBlood pic.twitter.com/1ldLWtQgsC

What do you think about Bard of Blood? Let us know in the comments below!

6 Actors Who Are Ruling Our Television Sets Right Now!

5 Pakistani Menswear Brands Who We Swear By!