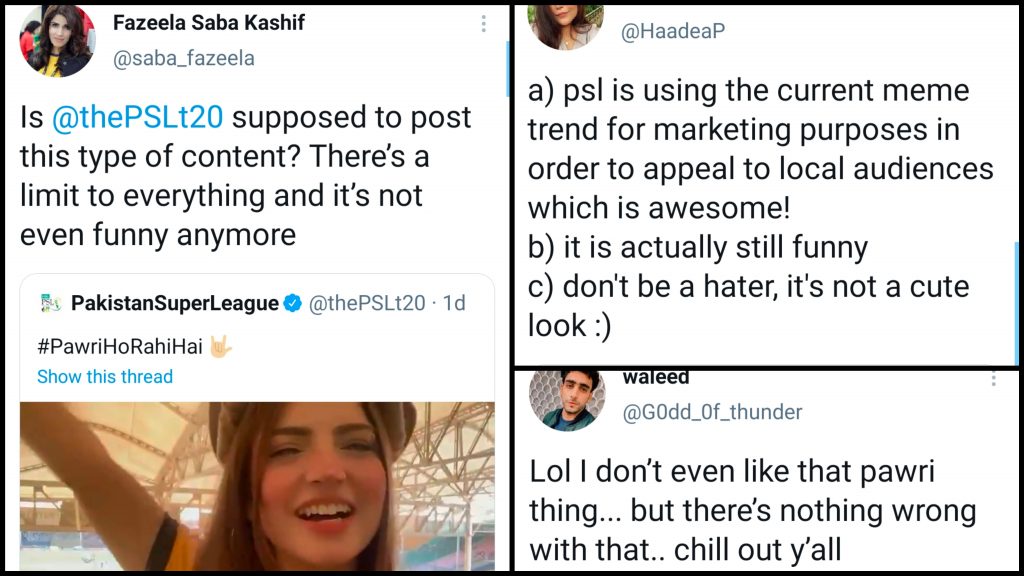 PSL season is in it’s full swing, memes and banter are in the air! Amid the excitement, the official PSL account posted a video of Dananeer, the girl who went viral for her ‘pawri ho rai hai’ video:

The harmless video was met with a ton of criticism with people complaining that they were sick of seeing the meme everywhere, but sports anchor Fazeela Saba Kashif had a different critique:

Is @thePSLt20 supposed to post this type of content? There’s a limit to everything and it’s not even funny anymore https://t.co/5dre3onnNu

The netizens, however, did not find themselves on the same page as her:

What's wrong in it? @thePSLt20 is marketing its championship with a home grown sensation who is widely been praised across the border. The girl is willingly participating in the campaign, there isn't any exploitation here.

Some shared how one doesn’t need to comment on everything they come across:

There's nothing wrong in it. If you don't like such stuff, just try to avoid it. Those who are enjoying it, let them enjoy. You don't need to comment on everything. As simple as that.

People wanted to know the reason:

Some thought her critique was intended to gather ‘publicity:’

I don't see any negative content in it.. This is trending now a days and they are marketing their team and PSL through it. Simple logic . I respect you as a presenter but please don't bash everything for the sake of publicity

People were sharing how art is subjective:

what is funny and what is not is quite subjective,If you don't find it funny it does not mean that someone else also does not find it adorable, nothing wrong in it….

Some thought she was speaking out of jealousy:

That's another prime example of the word 'JEALOUSY'.

Some shared how women shouldnt be bringing other women down:

women, you are supposed to support other women 😫 https://t.co/ALMv0qy3kv

If Kohli can, why cant @thePSLt20 ? Every comment against Daneer has been from a woman, shame on yall for discouraging others success. Lanti logo https://t.co/72E7rWct6F

Some suggested that she stops watching it if she doesn’t like it:

People who weren’t fans of the pawri meme found nothing wrong with PSL account posting the video:

Lol I don’t even like that pawri thing… but there’s nothing wrong with that.. chill out y’all https://t.co/O7gcFJf1fd

Some thought she wanted attention:

Some threw shade at her with an old video:

People were curious to know:

People were asking her to stop hating on it:

a) psl is using the current meme trend for marketing purposes in order to appeal to local audiences which is awesome!
b) it is actually still funny
c) don't be a hater, it's not a cute look 🙂 https://t.co/wX7N8uCxV8

What do you think about Fazeela’s take on the type on content? Share with us in the comments below!