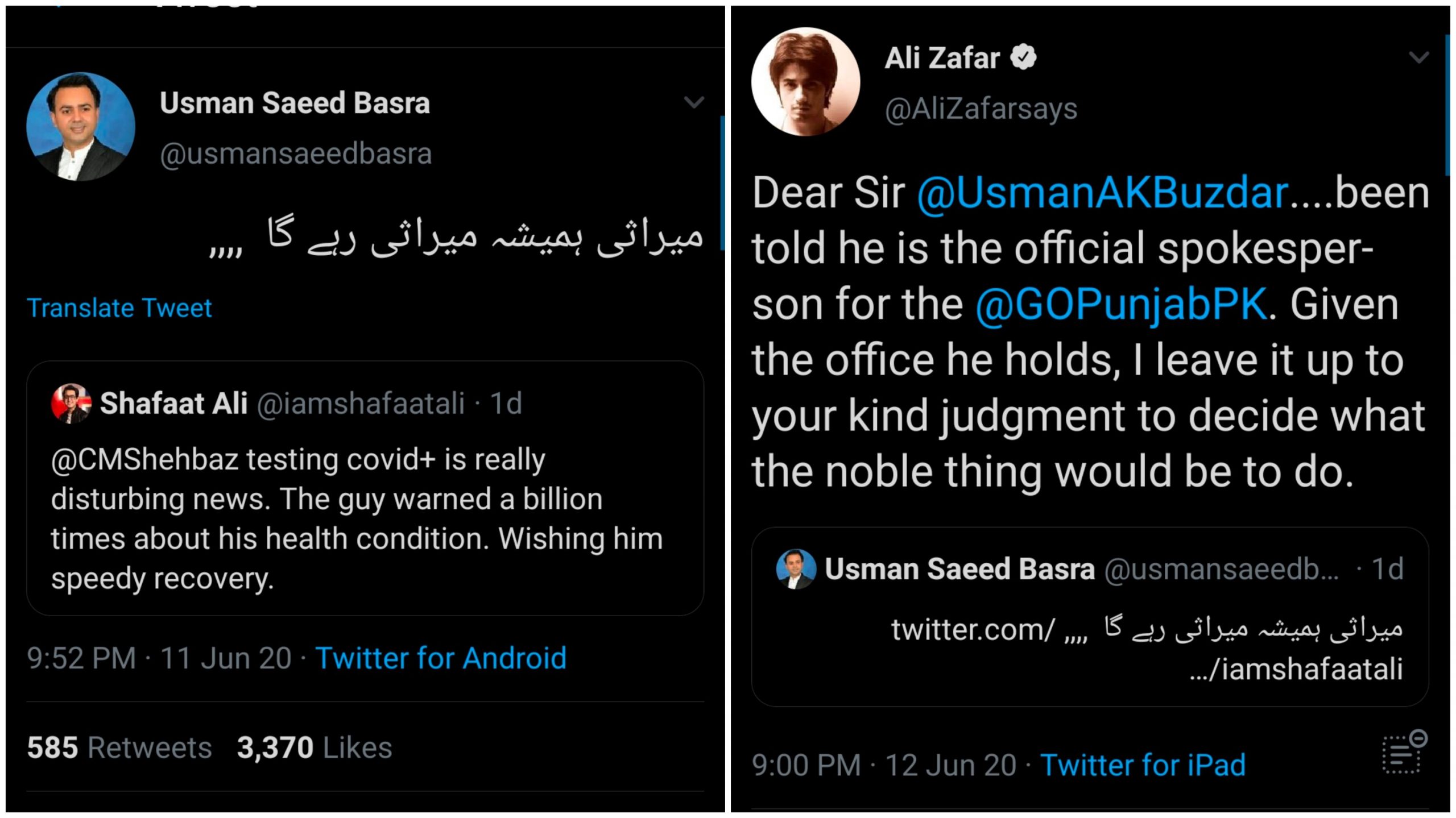 Just as Shehbaz Sharif got diagnosed with Corona, his well wishers started praying for his health, wishing him a speedy recovery, and so did comedian Shafaat Ali:

His tweet caught the attention of Punjab government’s spokesperson, Usman Saeed Basra and he tried throwing shade at Shafaat Ali by calling him a “meerasi:”

And people were furious at his response, Ali Zafar wanted immediate action to be taken against Usman Saeed Basra:

Dear Sir @UsmanAKBuzdar….been told he is the official spokesperson for the @GOPunjabPK. Given the office he holds, I leave it up to your kind judgment to decide what the noble thing would be to do. https://t.co/bzm0ZsNwlP

Actor Omair Rana too felt the need for an apology:

I once corrected a lawyer/politician who came from a family of that vocation that my father is a businessman, making him the meerasi not me. For Meerasi means one who inherits something, esp line of work. I see your Mens Rea @usmansaeedbasra Pls explain your Intent or apologise. https://t.co/kBBNWzLXfA

@UsmanAKBuzdar SB. If such people are the spokesperson for your Govt then shouldnt the ministery of culture be renamed as ministry of Marasees with the appointed minister being the HEAD MARAASI ? …Shame on this Gentleman. https://t.co/hKqXnF4nq8

People were questioning if this tweet suited his stature:

Very unfortunate n feel sorry. My simple question is does this tweet suit to your stature? @usmansaeedbasra https://t.co/ARJJnsw66o

People were not having it:

.@usmansaeedbasra we will not take it from you. @iamshafaatali is a fellow colleague and comedy/acting is a respectable profession. Your comment is showing disgrace for the entire artist community. What if this community refuses to vote PTI next time ? pic.twitter.com/nzkqBYql7h

Very disappointing use of words by someone who represent the ruling party. https://t.co/lyqG8BNbDd

People wanted action to be taken against Usman:

The most shameful tweet of the day . Is there anyone sane is in the government to take some notice of this @ImranKhanPTI @UsmanAKBuzdar https://t.co/v0MhKm3hdp

People were calling his statement cheap:

People were not expecting something this low coming from him:

Quite unfortunate, wasn't expecting this much low from someone bearing a Pol position.

Some were demanding for an apology asap:

Many thought that he could have replied without being personal:

Such a disgusting tweet. Shows the mentality and upbringing. He could have replied without getting personal. https://t.co/cqZj2YIUrn

Some felt that his reply was uncalled for:

Some came up with facts:

Degrading people on the basis of profession is the biggest challenge of 21 century. It is crime & its punishment laws must be implemented.Our mooto in this era should be"U keep to urself & I 'll keep to myself.U do ur things & let me do mine.U don't bother me & I won't bother U." https://t.co/QoH7GG7L5w

Many found for blow to be below the belt:

Usman bhai that was below the belt! Doesn’t suit you!

What do you think about Usman Basra’s remark? Let us know in the comments below!

Dear Celebs: Here’s How NOT To Let Trolls Get To You!