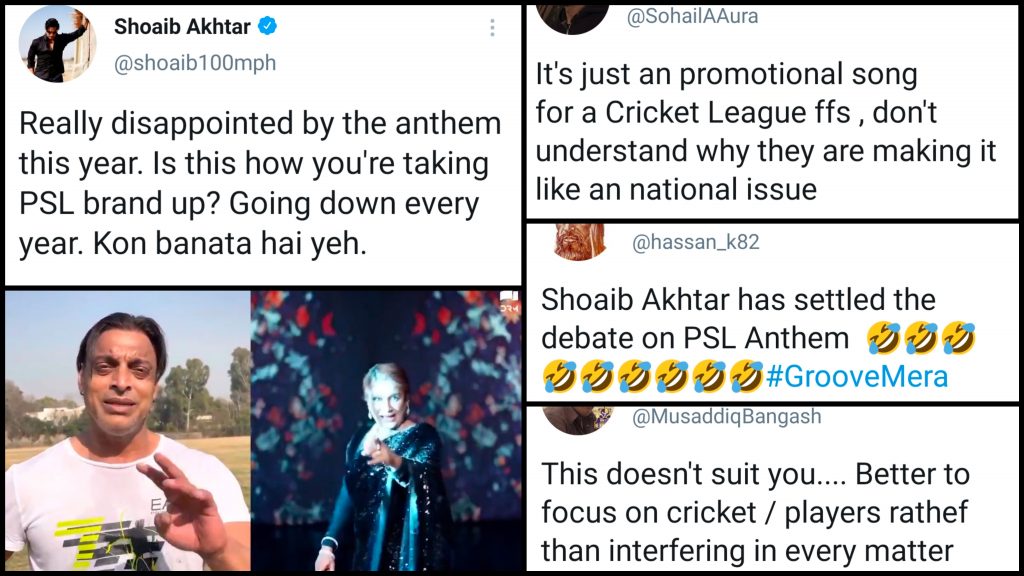 Every year during the PSL season, there’s a new anthem and a hundred new critiques disliking it and this year hasn’t been much different.

Really disappointed by the anthem this year. Is this how you're taking PSL brand up? Going down every year. Kon banata hai yeh.

Reviewing the new PSL anthem, Shoaib Akhtar had a lot to say, from the anthem scaring his kids to critiquing the technical aspects of the song, here’s what the netizens have to add:

Some agreed with him:

People were enjoying his reaction:

While I personally find the anthem to be perfectly fine, it's still really funny to see the reaction of the the legendary speed star! https://t.co/vG4HpLS3B9

People thought he’d give standup comedians a run for their money:

Legend! “aapne mere bachche dara diye” 😂 #pslanthem2021 #PSL6@iimcomic this man can give stand comedians a run for their money! 😂 https://t.co/AV8BaoilOe

People were shook to see him starting music reviews on his channel:

Some were calling him out on commenting on the negatives only:

This guy checks what the "negative" trend is and starts blabbering about it. Always negative because he knows that negativity will sell quicker and give him more view 🤚

Some were clearly not on the same page as him and were calling him out:

People wanted him to stop over-reacting:

There is absolutely nothing wrong with the song, stop overreacting.
And FYI there are more than one meaning of the word groove pic.twitter.com/cyvwdZ0b3O

People were defining groove for him:

In music, groove is the sense of an effect ("feel") of changing pattern in a propulsive rhythm or sense of "swing".
You need to improve your English.https://t.co/iFnmlCwwGC https://t.co/2GOjPf5lkv

Some wanted him to save his critique for cricketers only:

This doesn't suit you…. Better to focus on cricket / players rathef than interfering in every matter https://t.co/vAfKum7EDe

Some thought he was blackmailed into disliking the anthem:

Absolutely pathetic as ever. What he even has to do with a song. Better make some video on Pakistan cricket. Just to support his friend ,he will go to any level. People should stop supporting the blackmailer ali zafar. https://t.co/GXI7birWfz

People took the opportunity to throw shade at the fast-bowler:

You have a massive following, you should educate people.. Groove is all about dance moves, come on you should know this Shoaib, haven't you learned anything while dancing in the clubs? #YoutubeStar https://t.co/3eNXxWROdp

Some really didn’t understand the controversy surrounding the song:

It's just an promotional song for a Cricket League ffs , don't understand why they are making it like an national issue https://t.co/NMyuMiLvGb

What do you think about Shoaib Akhtar’s take on the anthem? Let us know in the comments below!

Unaffected By Trolls, Naseebo Lal Is Proud To Have Sung The PSL Anthem & People Are By Her Side!