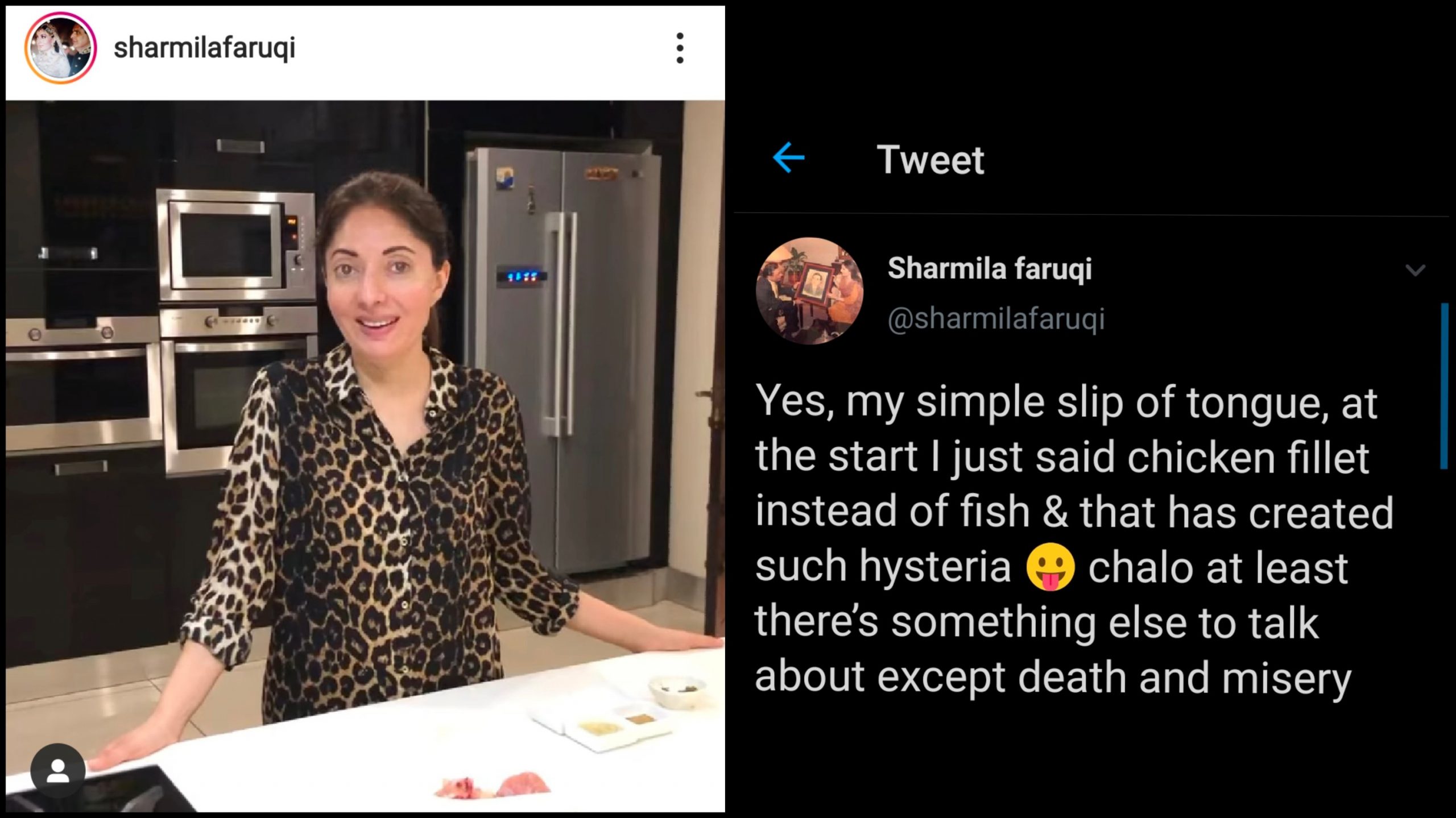 With majority of us being confined to our houses during the country wide lockdown, celebrities from all walks of life have been giving us inspiration on the things we can do while in quarantine. And Sharmila Faruqui too piqued the interest of many by sharing videos of her cooking.

However, she was trolled heavily for a mere slip of tongue where she called the red snapper fillet a ‘chicken fillet,’ not wanting to record the entire video again, Sharmila uploaded it to her Instagram account thinking that people will understand the obvious slip of tongue, but that didn’t happen. She in fact became meme fodder for the entertainment starved nation and people were not kind to say the least.

She begins by telling us she’s making chicken fillets. For this recipe she’s using red snapper/white fish?? What?? 😂 pic.twitter.com/5x85pRasEj

People found the video to be hilarious!

The exposè of the year:

Quarantine day 13: realising you can simply cut the tail of chicken fillet to make red snapper, these stupid restaurants have been charging us so much for bare minimum

Some were very observant!

Sure. Y’all are focusing on chicken fillet dressed as red snapper, but did you notice the garnishing before the seasoning?

Some actually turned it into a pick up line, whoa!

At least you have a decent meal to eat:

Quoting an article that called her slip of tongue rather ‘bizarre,’ she went on to explain how the video had blown out of proportion:

Woah! So my slip of tongue in my first ever home made cooking video provided much needed comic relief in these scary, depressing lockdown days. It went viral on social media blogs, fb pages, Watsapp and news. Yes I said chicken fillet instead of fish fillet at the start of my recipe and realised it soon after, thinking it’s harmless I let it go & posted the video on my insta since I wasn’t going to cook the fish all over again. Little did I know it will be picked up to provide much needed laughter these days! I’m glad! Something to talk about instead of the unfortunate rising corona infection numbers across the globe. At First I was shocked, then amused & now happy. However, I had to request a few blogs to take the video off because of the unkind & derogatory remarks by some of their followers especially men. As I politician I take that in my stride but my husband or my son definitely don’t. I guess we haven’t learnt much during our quarantine days.. we still are so unforgiving to the slightest slip coming from a female more so if she’s a politician. We leave no opportunity to bring a woman down. Thank you @fhmpakistan @siddysays. Thank you my darlings @girltalk_insta @salmakaramehdi @mehwishwish777! Guys new video coming up soon! 🥰

Sharmila shared how the trolling had her feeling all sorts of ways, from being shocked to being amused and then being happy, she was glad that she provided some comic relief. Sharmila then put the trolls back in their place by posting yet another video calling her fillet ‘a chicken red snapper fillet’ followed by her contagious laughter!

Here enjoyyy! Only I have this magic wand to turn a chicken into a fish! Sharmila’s special 🤪

And the internet is loving the shade!

Snapping us out of Quarantine Blues @sharmilafaruqi 🤣❤️🙈

People wanted her to keep them videos coming!

Ridiculous how @sharmilafaruqi is being trolled for a harmless and quite a funny mistake. Everyone is a bit too faarigh these days.

People were sending her love!

What do you think about Sharmila’s kind and yet savage comeback? Let us know in the comments below!

10 Things Every Pakistani Celeb Is Doing During The Lockdown!