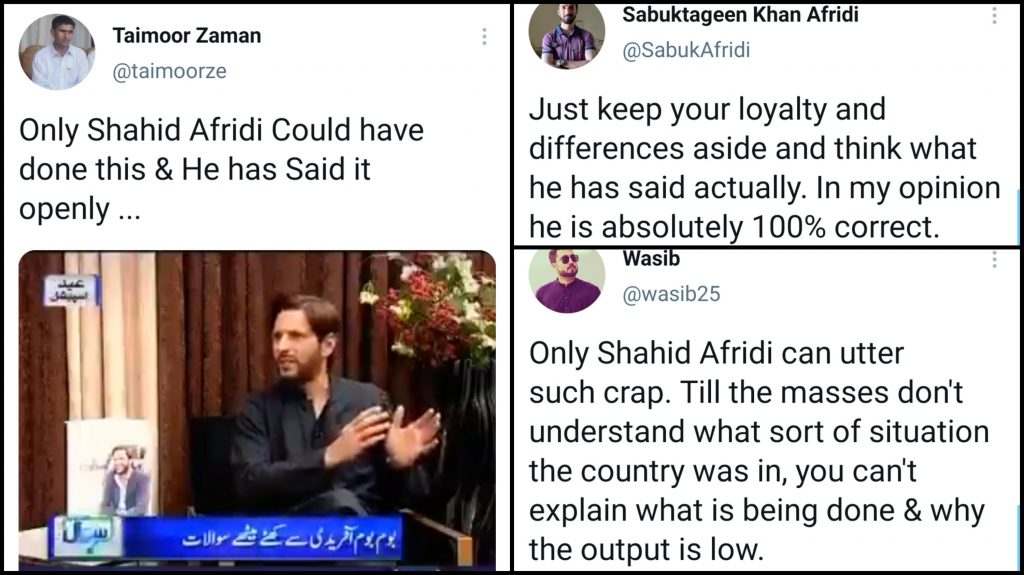 Shahid Afridi’s political aspirations have never been a secret. Ever since retiring from international cricket, the former cricketer has devoted most of his time to charity work and serving humanity with Shahid Afridi Foundation.

And while the man has no definite plans of entering politics, he does have some words of advice for the ruling PM, here’s what he thinks:

Only Shahid Afridi Could have done this & He has Said it openly … pic.twitter.com/9kvJWU3ynL

In an interview, Lala candidly shared how he feels that Imran Khan should focus on good governance rather than chasing after Asif Zardari and Nawaz Shareef. The clip has been making rounds on social media as netizens remain divided!

Just keep your loyalty and differences aside and think what he has said actually. In my opinion he is absolutely 100% correct.

I wish our Kaptaan realize this too 😊 https://t.co/MKsON6Ecuu

People were ready to see him as their PM:

People were lauding him for speaking his mind fearlessly:

Only he has the courage and bravery to say this @SAfridiOfficial.. 🔥❤️
Absolutely agreed https://t.co/pFkfBUxwoY

Mere Dil ki baat. 💯
I love this man for being so fearless & vocal about everything.
He's a huge IK supporter. He's gonna get bash for this coz sach bola hai ek dum. https://t.co/UxxPlqPXwb

Many people found themselves on the same page as him:

This is 100% nailed on correct I can't believe it https://t.co/H1vscYUBxC

Some were expecting a new kind of turn:

Sir jee @ImranKhanPTI he has a valid point. Stop expending your energy on the rulers of the past. Just focus on what you have been given the chance to do! https://t.co/pguC0fqZFV

People had their suspicions:

Doesn't he sound political, particularly in this video?🧐🧐 https://t.co/HTRp25F7TN

People quickly came to his defence for the hate he had been getting:

all he's saying is that khan saab should focus more on good governance and look at the replies and the hate he's getting.

People were sharing how most felt the same way:

Literally the whole country has been saying that for the past three years!🤷

And while many agreed with Shahid Afridi, others deemed him a noob:

He's just like any other noob who doesn't understand why IK says what he says. People want change so fast so he explains why it's hard to bring. Zardari, NS has taken Pak to cleaners. It's not easy but there's progress.

People were explaining how things weren’t as simple as they seemed to be:

What he said sounds correct and logical but only as a commentator. Try joining politics, face personal attacks & family attacks from mafia and media backed by NawaZardari, see what they have done to country and you get blame for their looting THEN we will know how easy it is

Some were questioning him:

whats wrong in talking about Nawaz/Zardari. they literally bankrupted the nation. https://t.co/JMz1ujOh3p

Some took it as an opportunity to throw shade at him:

Only Shahid Afridi can utter such crap. Till the masses don't understand what sort of situation the country was in, you can't explain what is being done & why the output is low.
Someone who couldn't captain a cricket team properly should know that everything has a context. https://t.co/lFKCX9RZv7

Some accused him of being jealous:

I can believe anyone but him,I see jealousy on his face whenever he's talking about Imran Khan

What do you think about Lala’s advice to Imran Khan? Let us know in the comments below!

Peek Freans Smile Donuts Have Become the Emblem of Happiness for Celebrities Across Pakistan!

Remaining PSL6 Matches To Be Held In UAE & Netizens Couldnt Be Happier!